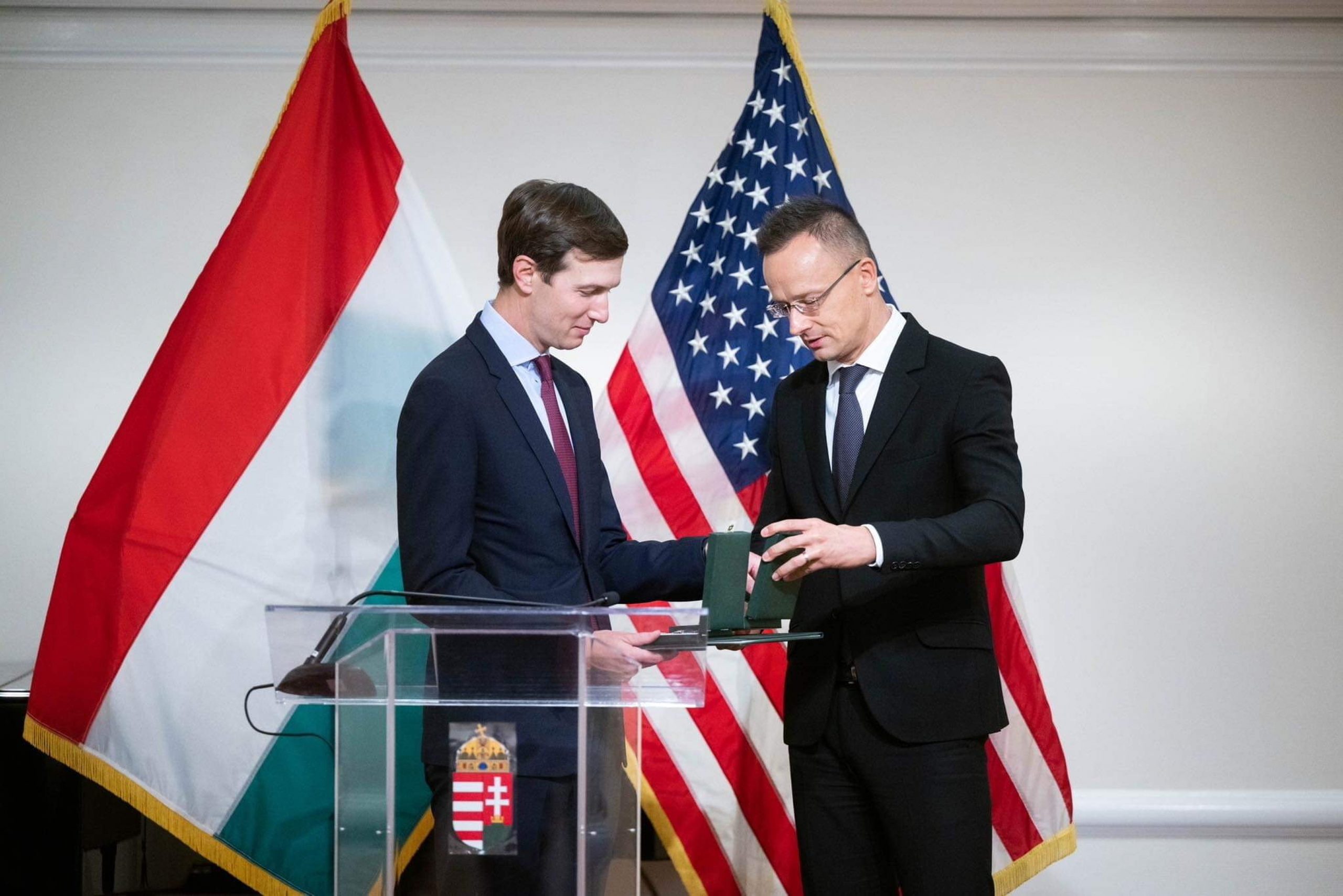 Péter Szijjártó, Hungarian Minister of Foreign Affairs and Trade, presented the Middle Cross of the Order of Merit of Hungary to Jared Kushner, former senior advisor to US President Donald Trump, on Thursday in New York for his work in strengthening Hungarian-American relations and promoting peace in the Middle East.

In his laudation, the Minister stressed that today, amid challenges of a gravity not seen since the Second World War and in the current security environment, the importance of initiatives and individuals who successfully work for peace has increased.

Jared Kushner, who is the husband of Donald Trump’s daughter Ivanka Trump, has been described by the Foreign Minister as a “diplomat for peace” who has made significant strides in bringing peace to the Middle East, a region that has been the least known for peace in decades, by negotiating the so-called Abraham Accords.

The Abraham Accords are a series of joint normalization statements effective since September 15, 2020, between Israel, the United Arab Emirates, and Bahrain, mediated by the United States, in which Jared Kushner and the Trump administration played a crucial role. As part of the dual agreements, both the United Arab Emirates and Bahrain recognized Israel’s sovereignty, thus enabling the establishment of full diplomatic relations. The signing of the accords transformed the relationship between Israel and the world’s Arab nations. They also provide a pathway to the end of Arab-Israeli conflict and future peace.

Even though the accords are the greatest achievement since the Oslo Accords in 1993, which was an attempt to set up a framework that would lead to the resolution of the ongoing Israeli–Palestinian conflict, neither the Trump administration nor Jared Kushner himself had received any recognition for it.

The Hungarian Foreign Minister underlined at the event that Central Europe and Hungary are paying special attention to the Middle East for several reasons. Among other reasons, the security situation in the region determines and influences the security of the Central European region, and tens and hundreds of thousands of Israeli citizens have Hungarian roots, and their security and well-being are of utmost importance to our country, he pointed out.

Szijjártó said that under Donald Trump’s presidency, relations between Hungary and the United States were the best ever. And this did not happen on its own, he said, but had to be worked for, and Jared Kushner played a major role in this.

He added that if Donald Trump had won the last US presidential election, the war in Ukraine would probably not have broken out.

As for the upcoming US mid-term elections, he said that as the Hungarian government bases its foreign policy on mutual respect, it does not want to get too involved in the issue, so as not to raise suspicions of attempted interference, but they are clearly rooting for the Republican Party.

In his acceptance speech, Kushner remarked that he had initially thought that Europe would be a much more active partner in the Middle East peace-building effort, but “everybody kept repeating the same phrases, kept trying the same things without success.”

In contrast, he said that Péter Szijjártó was a partner, had good ideas, made useful suggestions and told him that if they wanted to make a difference, they had to try something different from what had not worked before.

“When we needed help from Europe, I always called Peter first,” he said.

Meanwhile, as a sign of a strong relationship between the Hungarian government and the Republican Party in the US, former president Donald Trump sent a congratulatory message to Hungarian Prime Minister Viktor Orbán regarding an article in the Wall Street Journal which depicted the Hungarian leader as an “improbable hero for the American right.”