Contrary to his previous statements, Gergely Karácsony announced today that he is withdrawing from the primaries in favor of Péter Márki-Zay. Karácsony asked his supporters to keep trusting him and now support PM candidate Márki-Zay in the second round.

Péter Márki-Zay and Gergely Karácsony held a press conference this afternoon, during which the latter announced that he has withdrawn from the elections “with goodwill and a pure heart.” The deadline to do so was noon today and the conference started a little after 11 a.m. so he waited almost until the last minute to make his decision public.

In the last days, the two candidates had several meetings, and they kept changing their minds in the process. Just two days ago, Karácsony confirmed that he will not step aside and it was Márki-Zay who said he would be willing to do so if they cannot come to an agreement. Then they said that neither will step aside. However, their latest decision seems to be the final one: Péter Márki-Zay will run against Klára Dobrev in the second round of the primary elections.

Karácsony said that making this decision was easy and difficult at the same time. It was easy because he knows that Márki-Zay is a “fair and honest” person. Moreover, according to him, running was never about gaining power in his case, but serving the nation and reuniting it. The difficult part was that he was supported by 170,000 people, parties, and organizations. However, he now asks these people to support Márki-Zay. He added that “those who do not make sacrifices are not patriots.” 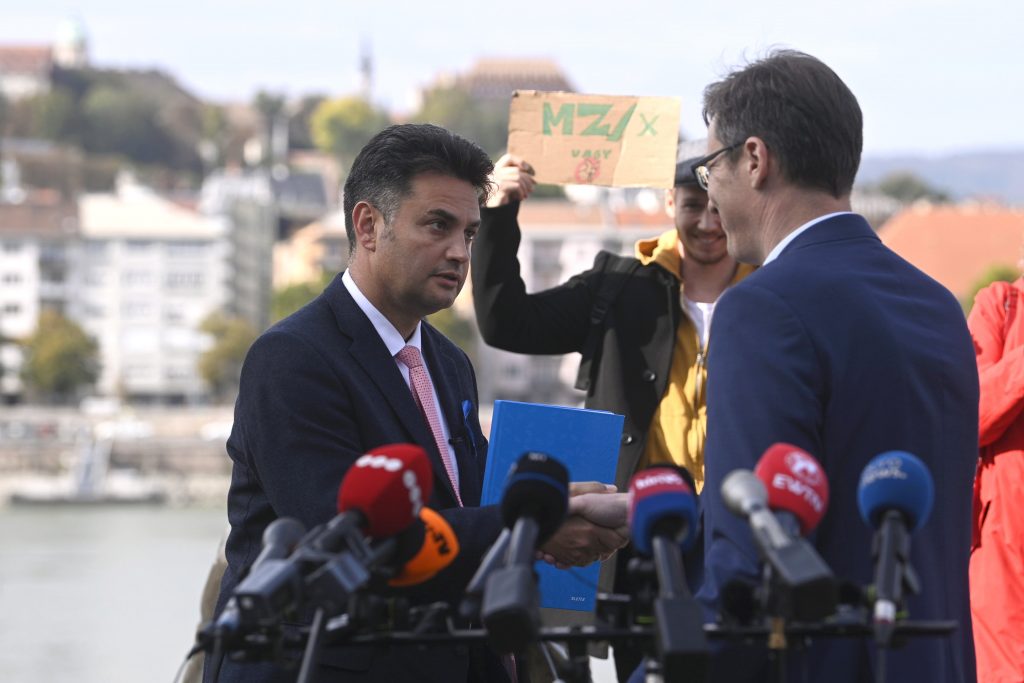 Márki-Zay expressed his gratitude towards the Budapest mayor and called him a patriot for taking this step. He thinks that Karácsony “has proven that for him, the country comes first.” He also said that “from now on I will also represent what Gergely Karácsony represented,” even though they do not agree on everything, as Karácsony is a social-democratic and green politician, while Márki-Zay is a center-right one. They will work together to make a program that will be acceptable to everyone.

Márki-Zay thinks that the most important question of next year’s general election is whether the country will be free and European, or it will turn to the East and go down as a “corrupt dictatorship” that will “disappear in the swamp.”

Both Karácsony and the mayor of Hódmezővásárhely think that Klára Dobrev of the leftist Democratic Coalition (DK), who is the wife of controversial former Socialist PM Ferenc Gyurcsány,  does not have as much of a chance to defeat Viktor Orbán as Márki-Zay does. The press conference was not the first time they made this clear. Therefore, Márki-Zay asked everyone, including DK’s voters, to vote for him in the second round so he will be able to replace the incumbent prime minister. However, he emphasized that Dobrev is an “endlessly hardworking” politician and has good abilities. As he said before and now mentioned again, he is very proud that she achieved the best results, especially as a woman, in the first round. Márki-Zay also believes that Fidesz supporters are more likely to vote for him.

It is important to mention, however, that both Karácsony and Marki-Zay confirmed that in case Dobrev wins the second round, they will fully support her against Orbán.

Reactions from the other parties

It was already known before the press conference that Momentum decided to support Péter Márki-Zay. The president of the party, András Fekete-Győr, said earlier that they were not willing to support Klára Dobrev.

Jobbik previously announced that they will not support anyone. The party’s president, Péter Jakab, said that people should decide according to their own best judgment and they will support the one remaining candidate in the end. This decision was confirmed again after Karácsony’s announcement.

LMP stated that they can only support a green politician, and they also confirmed this after the conference took place. Since Karácsony was the only one, they will not support Márki-Zay, nor did they say that they would support Dobrev.

Párbeszéd, the party Karácsony is the co-leader of, did not make a comment so far.

The second round of voting will be held between October 10-16. It is now official that voters will see three names on the ballots, (as they have already been printed). The crossed-out name will be Karácsony’s with Dobrev and Márki-Zay remaining to challenge one another for the position of the joint opposition’s PM candidate.

In the featured photo (from left to right): Péter Márki-Zay and Gergely Karácsony. Photo by Zoltán Balogh/MTI