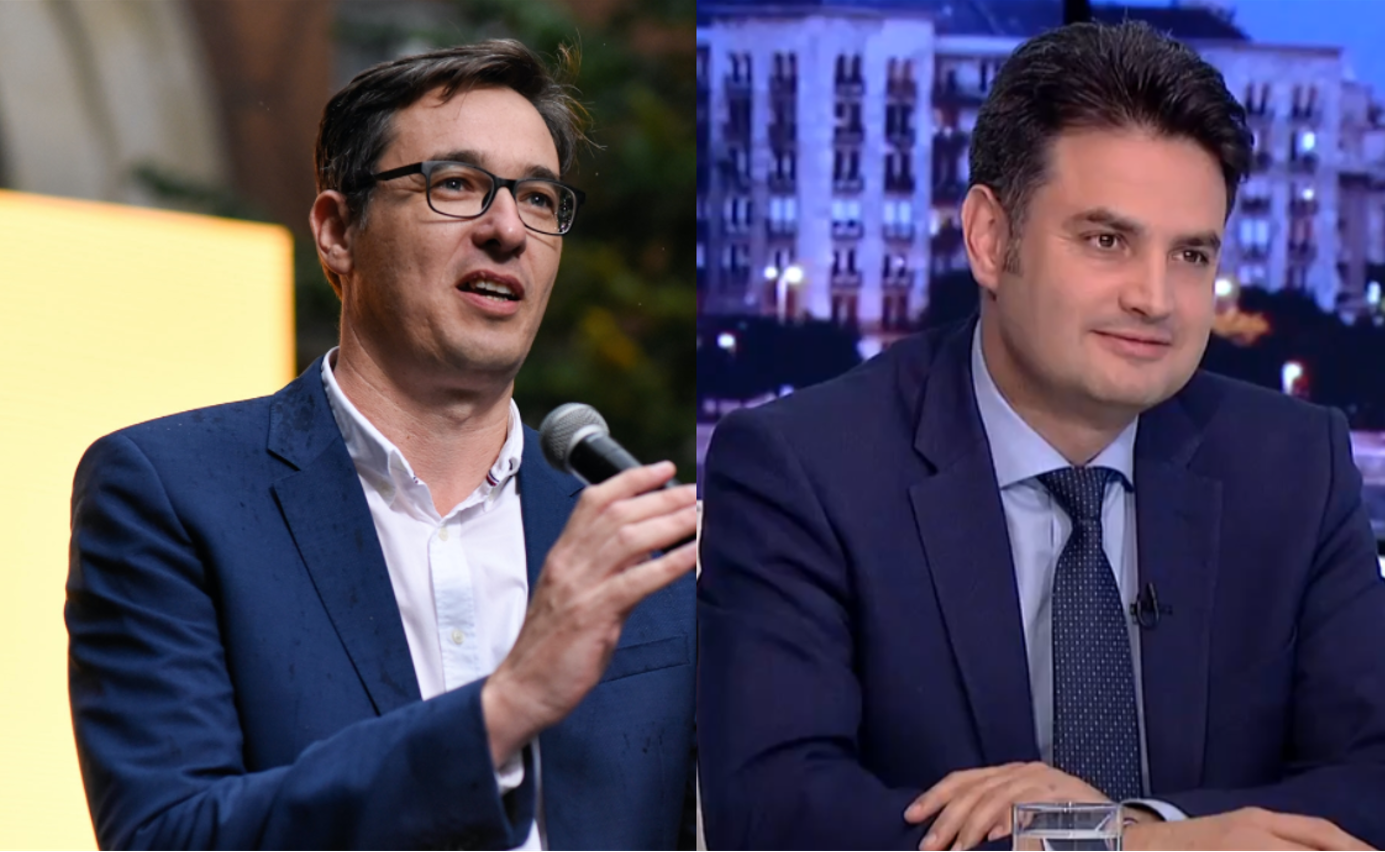 As we are getting closer to the second round of the primary elections, the tension between candidates does not seem to be easing. Gergely Karácsony and Péter Márki-Zay still haven’t decided who will step aside. Surveys are also contradictory about which one of them is more likely to win. They only believe that one of them, and only one, has a good chance to challenge the third candidate, Klára Dobrev (wife of controversial former PM Ferenc Gyurcsány), who has won the first round of the primaries. However, the story took a new turn on Wednesday, suggesting that it is also possible that in the end, all the three PM candidates could clash in the second round.

The first round of the elections ended with Klára Dobrev, Gergely Karácsony, and Péter Márki-Zay going into the second one. They received the most votes in this order.

As we have also previously reported, Karácsony and Márki-Zay said that they would jointly run. However, they have not yet decided which of them should run for the prime minister candidacy in the second round, but their negotiations are promised to be concluded soon. At one point, they even wanted to have their names next to each other on the ballot papers instead of below, but the Civil Electoral Commission (CVB) did not allow this, saying that they cannot change the rules during the elections. Márki-Zay said that this would have depended solely on the generosity of the parties involved. 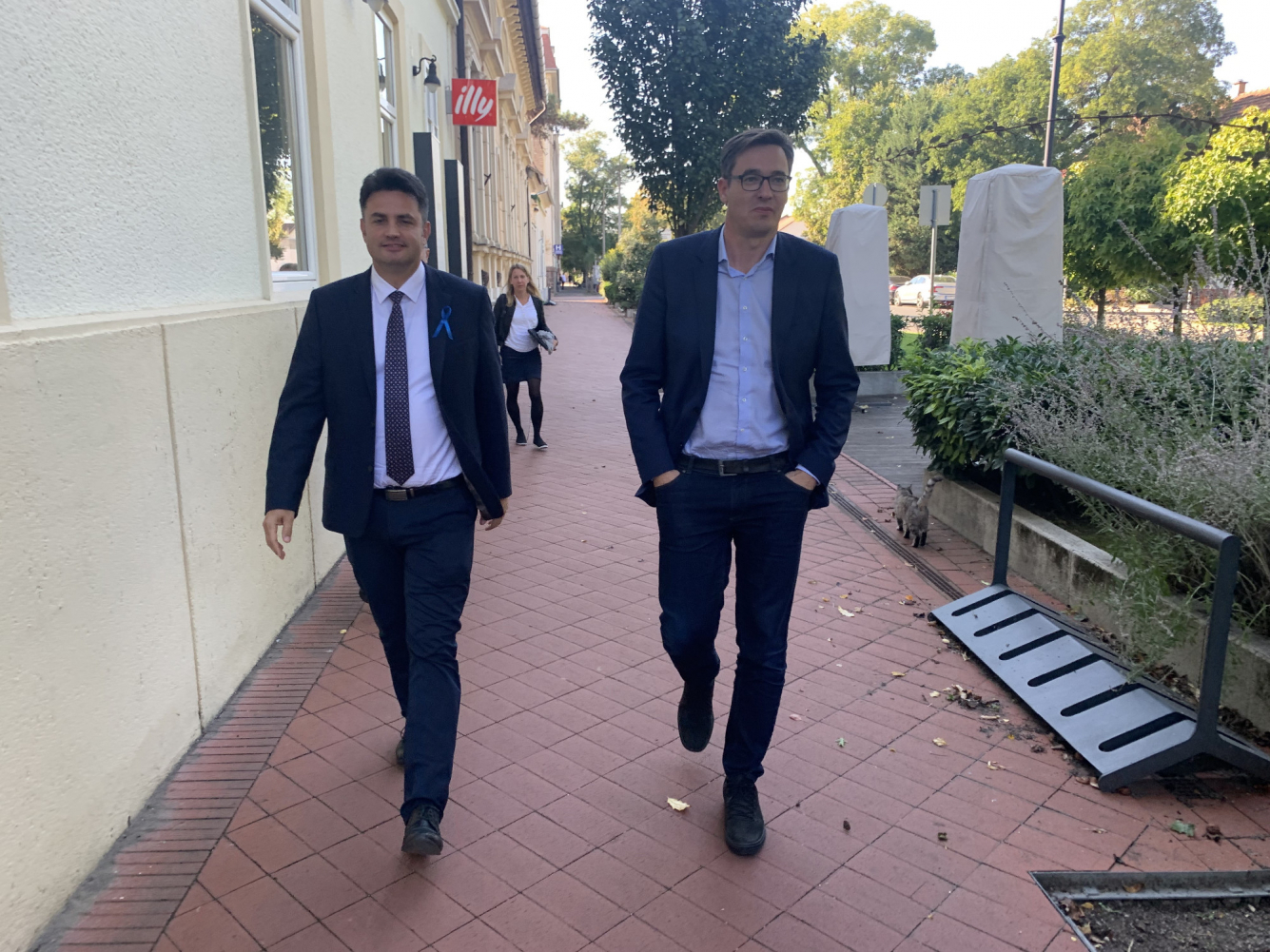 "No tandem- we don't change the rules during the game, that's what democracy is all about, decide whose name should be on the ballot paper," György Magyar, the Civil Electoral Commission's president said.Continue reading

Who has the better chance?

While the two men continue to negotiate, it would be useful to know which one of them might have more of a chance in the future when the actual elections take place. But it does not seem to be obvious. The Publicus Institute, Medián, and the Závecz Research Institute carried out surveys, and the results are quite different. In each case, the respondents were already aware of the results of the first round before answering.

Medián is a Hungarian-owned, market and public opinion research company considered liberal-leaning, founded in 1989, which has played a pioneering role in the field of political and media research, as well as in the establishment of Internet research in Hungary.

Publicus Institute is also a Hungarian market and opinion research company, considered leftist-leaning, which was established in 2006. On behalf of Népszava, it publishes monthly research reports on party support and other public issues.

The staff of Závecz Research Institute (ZRI), also considered to be closer to the leftist parties and ideology, are sociologists, economists, psychologists, and marketing experts. They have decades of analytical experience.

The Publicus Institute examined several cases, such as what would happen when Karácsony or Márki-Zay withdraws, what if all three of them stay, and how does it influence the elections if Jobbik and Momentum, (the two parties whose candidates did not make it to the second round), asked their voters to support one of them. In each case, Karácsony would win over Márki-Zay and over Dobrev as well. According to the poll, Márki-Zay could not win even if he were the one going against Dobrev. Of course, there are always some who do not wish to vote at all, but in none of the cases were they above 9%. 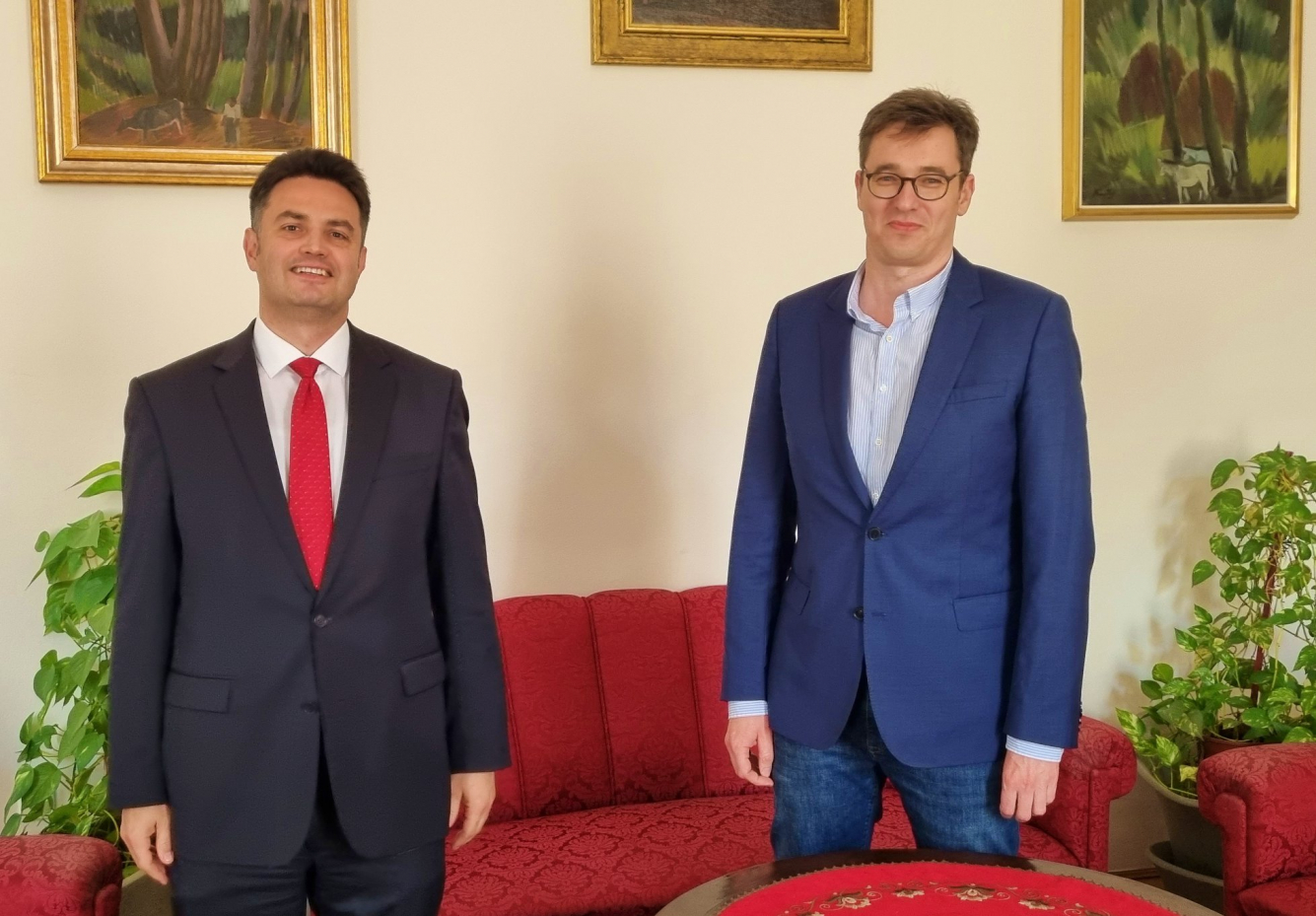 In the wake of recent statements, Péter Márki-Zay's withdrawal in favor of Gergely Karácsony is definitely the more likely outcome.Continue reading

Interestingly, Medián’s survey says otherwise. According to theirs, Dobrev is in the lead, followed by Márki-Zay, and trailed by Karácsony. However, this is only if voters have to decide between the three candidates.

ZRI’s research, ordered by Márki-Zay’s Everyone’s Hungary Movement, predicts Dobrev as the most likely winner, no matter which one of the other two candidates steps aside. Karácsony’s voters would be slightly more willing to support Márki-Zay than the other way around. Márki-Zay’s voters might also choose to vote for Dobrev in the second round if their favorite withdraws, but this is less likely. Not everyone has decided what they would do in each case so the poll suggests uncertainties in the latter cases as well.

Márki-Zay himself suggested earlier that Momentum and Jobbik’s supporters would be most likely to vote for him. ZRI’s poll seems to confirm this. President of Jobbik, Péter Jakab, said the party will not support anyone yet as people should decide according to their own best judgment. The party will support the one remaining candidate in the end. Momentum might back Márki-Zay or Karácsony in the future, yet what is known so far is that they would not like to support Dobrev, their president, András Fekete-Győr, said.

Another important result of ZRI’s survey is that, according to them Fidesz is still the most likely to win the elections in the spring of 2022. 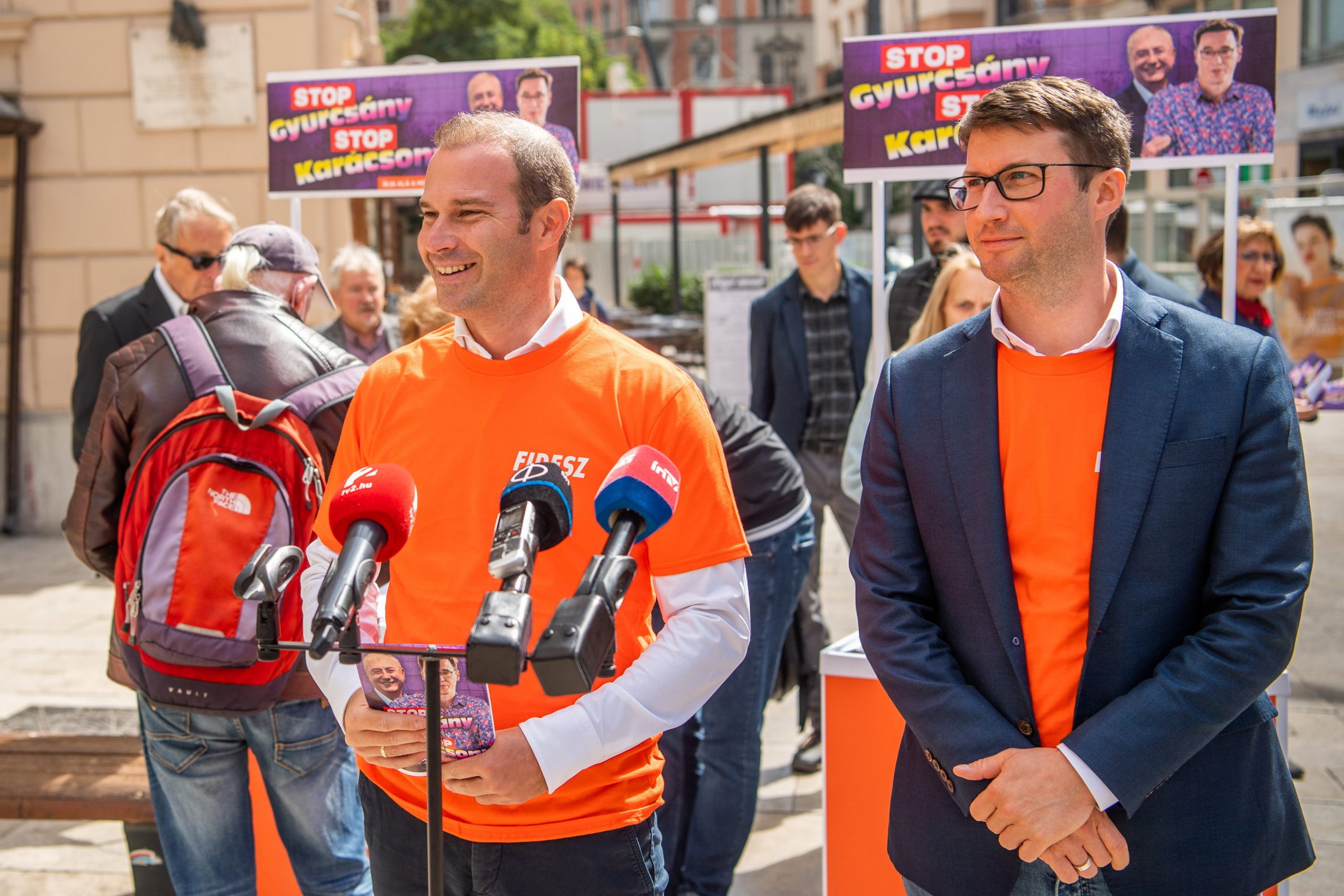 Fidesz communications head Hollik said Gyurcsány and his party were in favour of a "united states of Europe" that would end Hungary's sovereignty.Continue reading

Why the results are so different is unknown, but Publicus’s poll is the one we know most about so far. The full charts, methodology, and other details can be read here.

Who will step aside?

The negotiations are still underway between Budapest mayor Karácsony and Hódmezővásárhely mayor Márki-Zay. Neither wants to withdraw but Márki-Zay said he would do it if it came to that. “The fact that I said that I was willing to do this [to withdraw] does not mean that we have agreed on this,” he said, adding they don’t want to make this a vanity issue, they want to consider research data and make a responsible decision based on that. But deciding based on research data seems to be very difficult now as the data is contradictory.

Contrary to Márki-Zay, Karácsony never said that he would be willing to forfeit. At one point he even said he would have to be hit by a tram to withdraw. Karácsony also confirmed on Wednesday afternoon at his “extraordinary press conference” that he will not step aside as no one else represents the kind of politics he would like to see.

A few minutes later, Márki-Zay reacted to Karácsony’s press conference, saying that he believes Karácsony’s statement was political maneuvering, putting him into a tight spot. They spoke this morning and scheduled another meeting for the evening and also agreed on having a joint announcement on Thursday. Instead, Karácsony unilaterally made an announcement. Márki-Zay believes that Karácsony found the polls unfavorable and instead of withdrawing, he is now trying to make him step aside. However, the mayor of Hódmezővásárhely believes that the surveys show that he has more of a chance to win. Márki-Zay also emphasized that he personally has no problems with Dobrev and does not want to run against her, but since he believes that Dobrev has the least chance to defeat Orbán, the joint opposition needs a PM candidate who has the best chance to succeed next year at the general elections; therefore, the best outcome for them if not Dobrev wins the primary.

In the end, he also mentioned that it might be possible that neither will retreat and there will be three candidates in the second round.

The Democratic Coalition’s Klára Dobrev has won the first round of the primary election. This is why her place is secure for now in the second round. Despite receiving the most votes, others don’t think she would be the best fit to go against incumbent PM Viktor Orbán.

András Fekete-Győr shared that during the first days of the primaries, they thought that Dobrev could win the first round. “Then I said what not only the analysts, the representatives of the different parties, but also the voters understand and feel very well, that it is the most difficult thing to win an election in Hungary with her on the 15th anniversary of the Őszöd speech,” he said. “Anyone who cannot see the realities of the Gyurcsány phenomenon in Hungarian society is blind. And the people are not blind, they know that very well.”

The Őszöd speech was the speech then Prime Minister Ferenc Gyurcsány (husband of Klára Dobrev) delivered to the 2006 Hungarian Socialist Party (MSZP) congress in Balatonőszöd. Though the May congress was confidential, Gyurcsány’s address was leaked and broadcast by Magyar Rádió on Sunday, September 17, 2006, igniting a nationwide political crisis.

Liberally using vulgar language, Gyurcsány criticized the MSZP for misleading the electorate and said that its coalition government had enacted no significant measures over its tenure. The mass protests the speech’s release precipitated are considered a major turning point in Hungary’s post-communist political history. MSZP’s inability to contain the speech’s political fallout led to the popular collapse of MSZP, and more broadly considered, of the Hungarian political left, paving the way for Fidesz’s supermajority victory in the 2010 Hungarian parliamentary elections.

Márki-Zay also said before that “Gergely Karácsony and I agree that it would be the most difficult for Klára to win this match against Viktor Orbán.”

Now, he added that “Dobrev’s success is unquestionable, but the disastrous results before 2010 which gave Fidesz a two-thirds majority, and the billions Fidesz spent to stop Gyurcsány, make Klára Dobrev the least likely to win against Viktor Orbán.” At the same time, he mentioned how proud he is that Dobrev, as a woman, was the most successful politician in Hungary in this election. He said it also shows that Hungarian society is much more enlightened on this issue.

Conflict is swirling before the second round, but it is most likely that voters will see two names on the ballots in the end: Dobrev’s, and someone else’s. As the papers already had to be printed, a third name will be crossed out.

The second round of voting will be held between October 10-16.