Zelenskyy-Orbán Clash Over “Strategic Calm” Regarding Sanctions and Military Aid

“There is no time to hesitate. It’s time to decide already,” Ukrainian President Volodymyr Zelenskyy said to Prime Minister Viktor Orbán at a European Council meeting Thursday evening. The Ukrainian president listed the European Union Member States who he believes are supporting Ukraine, then stopped at Hungary and criticized the Orbán government’s approach to the conflict. Bertalan Havasi, the Prime Minister’s press chief, voiced Orbán’s rejection of the Ukrainian president’s requests for Hungary to support energy sanctions on Russia and to send weapons to Ukraine, saying they would not be in line with the national interest.

In a heartfelt speech to the European Council, President Volodymyr Zelenskyy thanked the European Union for its support in his country’s war against Russia, noting that it was “a little late.” He urged the council to prepare Ukraine’s EU membership, and listed the various Member States and their relations with the Ukrainian government.

Zelenskyy Tells Orbán to Pick A Side

After listing off a majority of EU countries whom he deemed cooperative, Zelenskyy stopped at Hungary, and spoke directly to Prime Minister Viktor Orbán.

Hungary… I want to stop here and be honest. Once and for all. You have to decide for yourself who you are with. You are a sovereign state. I’ve been to Budapest. I adore your city. I have been many times – very beautiful, very hospitable city. And people, too. You have had tragic moments in your life. I visited your waterfront. I saw this memorial… Shoes on the Danube Bank. About mass killings. I was there with my family.”

“Listen, Viktor, do you know what’s going on in Mariupol?” Zelenskyy asked, “Please, if you can, go to your waterfront. Look at those shoes. And you will see how mass killings can happen again in today’s world.”

The Ukrainian president referred to the memorial honoring the roughly 20,000 Jews who were massacred at the edge of the water by Arrow Cross militiamen during the Second World War. He emphasized that Russia is doing the same thing to Ukrainian civilians today. “Adults and children. Grandparents,” he said, “and there are thousands of them. And these thousands are gone.”

Zelenskyy Requests Extension of Sanctions and Weapon Shipments from Hungary

Zelenskyy concluded his speech by emphasizing that Ukraine needs the support of Hungary. “We believe in your people. We believe in the European Union.”

President Zelenskyy has two requests for Hungary. The first is to vote in the extension of sanctions to the energy sector and stop buying both gas and crude oil from Russia. The second is to send weapons to Ukraine through its own borders.

In response to Zelenskyy’s address to Orbán, the Prime Minister’s chief of staff, Bertalan Havasi, told the media that the Hungarian prime minister rejected Zelenskyy’s two requests. According to Orbán, these two approaches would be opposite of the nation’s interests.

Hungary wants to stay out of this war, this is why it does not allow weapon shipments through its borders and does not send weapons to Ukraine. At the same time, it is helping those fleeing the war with every tool at its disposal, extending humanitarian aid to them.”

Havasi added that to the best of his knowledge, half a million Ukrainian refugees had arrived to Hungary.

The press chief also brought up that if crude oil and gas shipments would be cut off, “Hungarian families would pay the cost of the war.” “85 percent of Hungarian households are heated with gas,” Havasi stated, “and 64 percent of Hungary’s crude oil imports come from Russia.” The press chief concluded that Hungary would oppose the extension of sanctions to the energy sector at all forums of the EU.

Szijjártó: Protection of Hungarians The Priority

Szijjártó emphasized the government’s position, stating that Hungary will do everything in its power to stay out of the war. “Therefore, even after this, we will not allow weapon shipments in the territory of our home.” Weapon shipments, the foreign minister argued, would turn into military targets, “and we are not willing to risk the lives and safety of the Hungarian people.”

The United for Hungary prime ministerial candidate and opposition leader Péter Márki-Zay responded to Zelenskyy’s words on Facebook, saying that the address brought shame to Orbán.

Viktor Orbán has once again brought shame on Hungary. […] It has become undisputable that his politics of the last 12 years has been heaped on history’s garbage dump, he is the one who has isolated himself, lost his allies, and turned into the one who EU and NATO members see as Putin’s last link.” 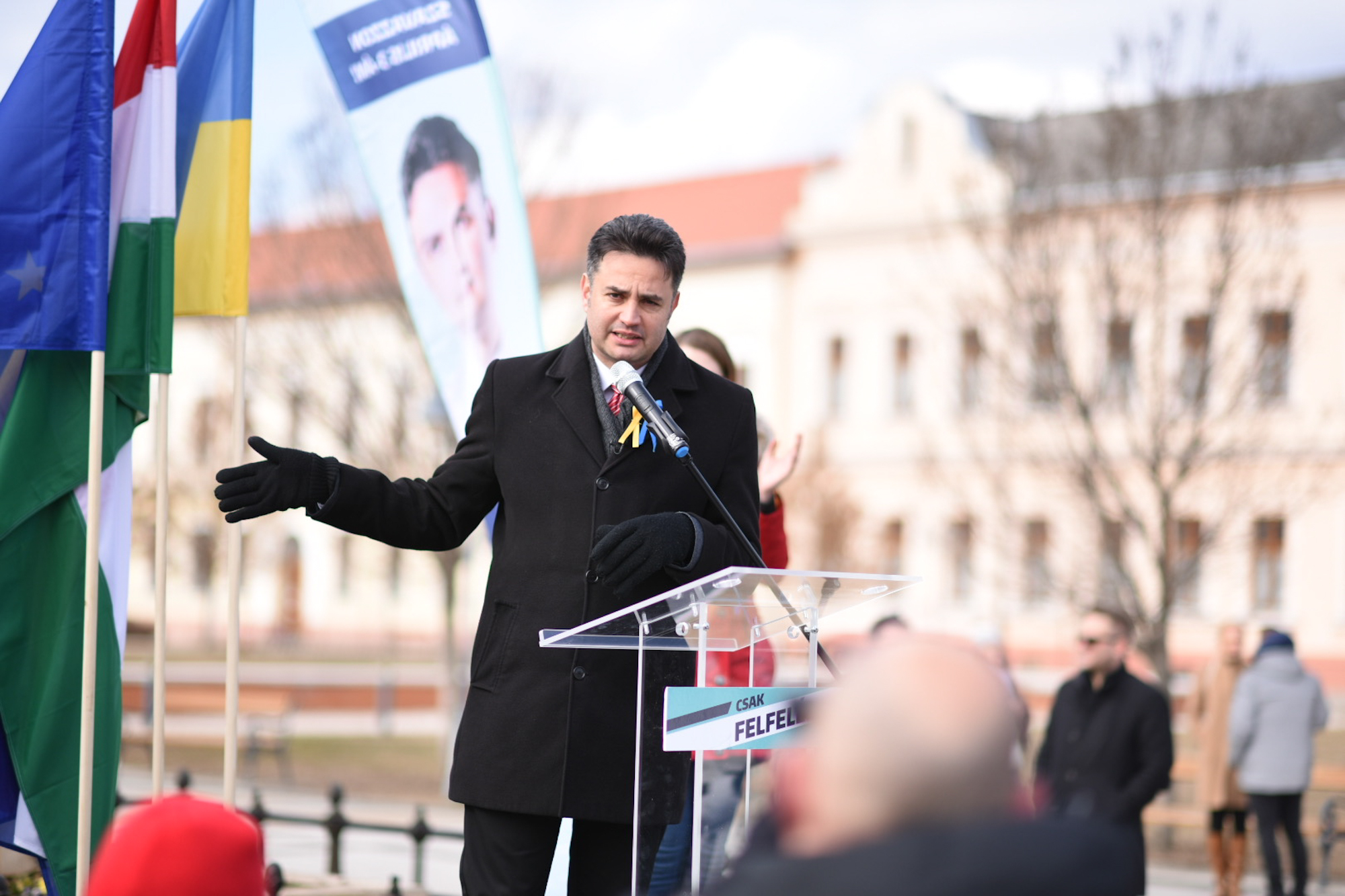 "The Orbán government had twelve years to use EU resources to help Hungary catch up, but Hungary is the second poorest country in Europe," Márki-Zay said.Continue reading

Budapest mayor and leader of the leftist green party Párbeszéd Gergely Karácsony voiced his support for Zelenskyy and his agreement with Márki-Zay. “Just like Ukrainian President Zelenskyy said: we need to decide who we are with. Putin or Europe? East or West? The nullified Orbán is not the one who should be deciding. We need to decide on April 3.”