The winners of the competition: Jules Matton, Veljko Nenadić and Thomas Kornél

The 24-year-old Veljko Nenadić won first prize at the award ceremony of the 2022 Bartók World Competition for composers, organized by the Liszt Ferenc Academy of Music.

The award ceremony of this year’s Bartók World Competition for composers was held at the Liszt Ferenc Academy of Music’s Solti Hall in Budapest on Saturday. The award ceremony and gala concert was streamed online.

The competition was open to composers with violin-piano duos; 96 composers from 31 countries around the world, from America to Europe and Asia to Australia, submitted 98 works,

according to the Academy’s statement.

The prestigious international jury awarded the first prize of 5000 euros to Serbian composer Veljko Nenadić, born in 1998, for his ’’Two Movements – Impromptu and Perpetuum Mobile’’. The second prize of 3000 euros went to Thomas Kornél, born in 1986 in the USA, for his ’’Fun-tasto: Reflection and Exhilaration’’. The third prize of 2000 euros was awarded to Frenchman Jules Matton, born in 1988, for his work ’’Homage to Bartók’’.

The score of their composition will be published and will be included in the repertoire of next year’s violinists’ competition.

“The Bartók Competition has started a process in contemporary classical music, young composers are reaching out to folk music the same way Bartók did: the unique fusion of folk music and classical music is evident in the works of the sons of several nations who have sent us entries for the competition,” Andrea Vigh, President of the Academy said in her speech, referring to the legacy of world-renowned Hungarian composer Béla Bartók. 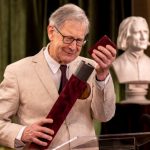