The speech Ursula von der Leyen delivered on the state of the European Union in the European Parliament on Wednesday was a “huge disappointment”, Gergely Gulyás, the prime minister’s chief of staff, told MTI.

In her speech, the president of the European Commission told that the fights against COVID-19 and climate change will be the main priorities for the European Union in the coming year. Ursula von der Leyen also addressed the situation in Afghanistan, urging the EU to “do more on its own.” She also urged th European Parliament and the member states to speed up the process of creating a new European migration management policy. Von der Leyen also emphasized the importance of the EU values such as the rule of law, and warned that there are “worrying developments in certain member states.”

In reaction to the speech of the president of the European Commission, PMO Head Gergely Gulyás said that Von der Leyen had failed to address the “most important issues” or put forward a plan to stop Europe’s competitive backsliding on the global stage.

He said that instead of prioritising the protection of Europe’s borders and halting migration, Von der Leyen was pursuing a pro-migration policy.

Also, the EC was overstepping its powers by interfering in the child and family protection laws of a member state, Gulyás said.

“It’s untenable that the commission trumpets the success of its crisis management while only some member states have access to the EU’s post-pandemic economic recovery funds,” he said, adding that this approach distorted competition within the bloc.

Gulyás insisted that the commission has broken the terms by which member states such as Hungary had consented to establishing the recovery fund, said. 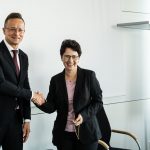