Pillars of Western civilization are cracking

In Viktor Orbán’s view, the next decade will be a decade of danger, uncertainty and war, as the pillars of Western civilization, previously thought to be unshakable, are cracking. The prime minister spoke of three shifts in Western civilization. In the past, we thought we were living sheltered by science, then Covid has arrived, we thought that war could not return to Europe, but there is war in Hungary’s neighborhood, and we thought that the Cold War could never return, yet some world leaders are now working to reorganize our lives into geopolitical blocs, the prime minister said.

The influence of the West is waning

The Hungarian prime minister spoke about the general mood in Europe that is, in his assessment, going in a downward trajectory, because the strength, power, authority and agency of Western civilization is waning. Most painful of all in the loss of power and material space is the West’s loss of control over energy resources, Orbán stressed. The West no longer owns the bulk of raw materials and energy resources. “Our situation, the situation of Europe, is doubly difficult: the reason is that Washington is behaving the way it does. No one has raised an eyebrow when America started extracting energy through fracking, although America has made no secret of the fact that it will use its energy policy as a foreign policy weapon, Orbán said, adding that the Americans are able to impose their will because they are not dependent on others for energy supplies.

The Loss of energy resources

Europeans have responded to this by resisting dependency from the Americans, and until now the EU was trying to protect the German-Russian energy axis, which is, however, being torn apart, as we speak. “The EU Commission’s latest proposal is that everyone should be obliged to cut their gas consumption by 15 percent, and if that does not work, it will be taken away from those who have it, Viktor Orbán warned.

Speaking about the situation of the Hungarian people, the Prime Minister said that the most important challenge is population decline. There are still more funerals than baptisms, he remarked. The world’s peoples can be divided into two groups: some are capable of reproducing themselves biologically, others do not. Referring to the Fidesz government family policies he said that the country’s situation has improved, but there has been no turnaround yet.

Until there is a turnaround, sooner or later Hungary and the Carpathian Basin will be ‘stolen’ from us, said the Hungarian politician.

Orbán said the second challenge facing us is migration, which has divided Europe in two. “One half is a world where European and non-European peoples live together. These countries are no longer nations, but conglomerates of peoples.  There is the other half of the West, Central Europe. The West, in the intellectual sense, has moved to Central Europe, and in the resto of Europe there is only the post-West left, warns Orbán, who said that the post-West is currently trying to force Central Europe to become like them.

In the Prime Minister’s view Brussels, together with George Soros’ network, wants to impose migration on Hungary. Referring to some past rule-of-law proceedings against Hungary he said that “We have been taken to court and convicted. And if it were not for the refugee crisis in Ukraine, they would have started to execute the sentence on us. Now they have put that aside. They have not taken it off the agenda, they have just put it aside.

He called it an “ideological travesty of the internationalist left” when they try to claim that Europe is inherently mixed-race. It is a historical and semantic fraud. The peoples living within Europe move, they work, but they are not mixed peoples. We are willing to mix with each other, but we are not willing to become mixed race”, Mr Orbán said. In his view today the Islamic civilization, which is gradually moving towards Europe, has realised that Hungary is not going to be the launchpad for their expansion in Europe because of the Hungarian tradition of fighting the Islamic Ottoman empire in the past.

The Issue with gender

The next threat is gender ideology, against with the government had introduced its Child Protection Act, and on account of which Hungary has been taken to court over by the domingt European left. “We don’t want to tell them how to live, we just want them to understand that in our country the father is a man and the mother is a woman – and they should accept this alongside with the Soros forces”, Mr Orbán stressed, adding that this “Western kind of folly” will never become the majority opinion in this part of the world.

The importance of alliances and the Visegrad Four

According to the Prime Minister, the key to victory is both determination and the search for allies. That is why the post-Westerners have done everything they can to disrupt the V4. The strategic interests of Poles and Hungarians in the war coincide: we want Russia to stay out of the way, we want Ukraine to remain independent. “But in Hungarian-Polish relations, the problem is one of the heart: we see this as a war between two Slavic peoples, and the Poles see it as a war of which they are part of. Our Slovak and Czech friends in the elections preferred the post-Western world,” he said with a hint of sarcasm.

Viktor Orbán said that the primary aspect of any war is that mothers mourn their children and children lose their parents. This notion must override everything else, even in politics. The prime minister stressed that so far 86 Hungarians have died in fighting in Ukraine. He therefore maintained his earlier position that this is not the Hungarian’s war. The prime minister also noted that

there are countries that criticize Hungary because they think it is not committed enough towards the Ukrainians, but many of these countries are far away from this conflict and at most they give financial or armed support.

The Americans’ claim that everyone should simply be on the right side of history and the rest of the world will obey is no longer valid, said Viktor Orbán. Most of the world does not heed that call. This war could well be the end of the Western supremacy, a multipolar world order is knocking at our door,” the prime minister assessed. He suggested that the West ought to develop a new strategy instead of empty victory reports, to focus not on winning the war but on good peace negotiations and a good peace offer. The EU’s job is not to side with the Ukrainians against the Russians, but to stand between the Russians and the Ukrainians, Mr Orbán stressed.

The prime minister said that Brussels’ proposal to abolish consensual decision-making in EU foreign policy is dangerous. “Europe cannot become a global political player because it cannot even keep the peace at home”, the prime minister pointed out, calling unified EU foreign policy decision-making “imperialism”. It is also a big problem that the EU cannot defend its own borders. The EU should not dream up its own central role in world politics, but first it should do its job at home, he stressed. 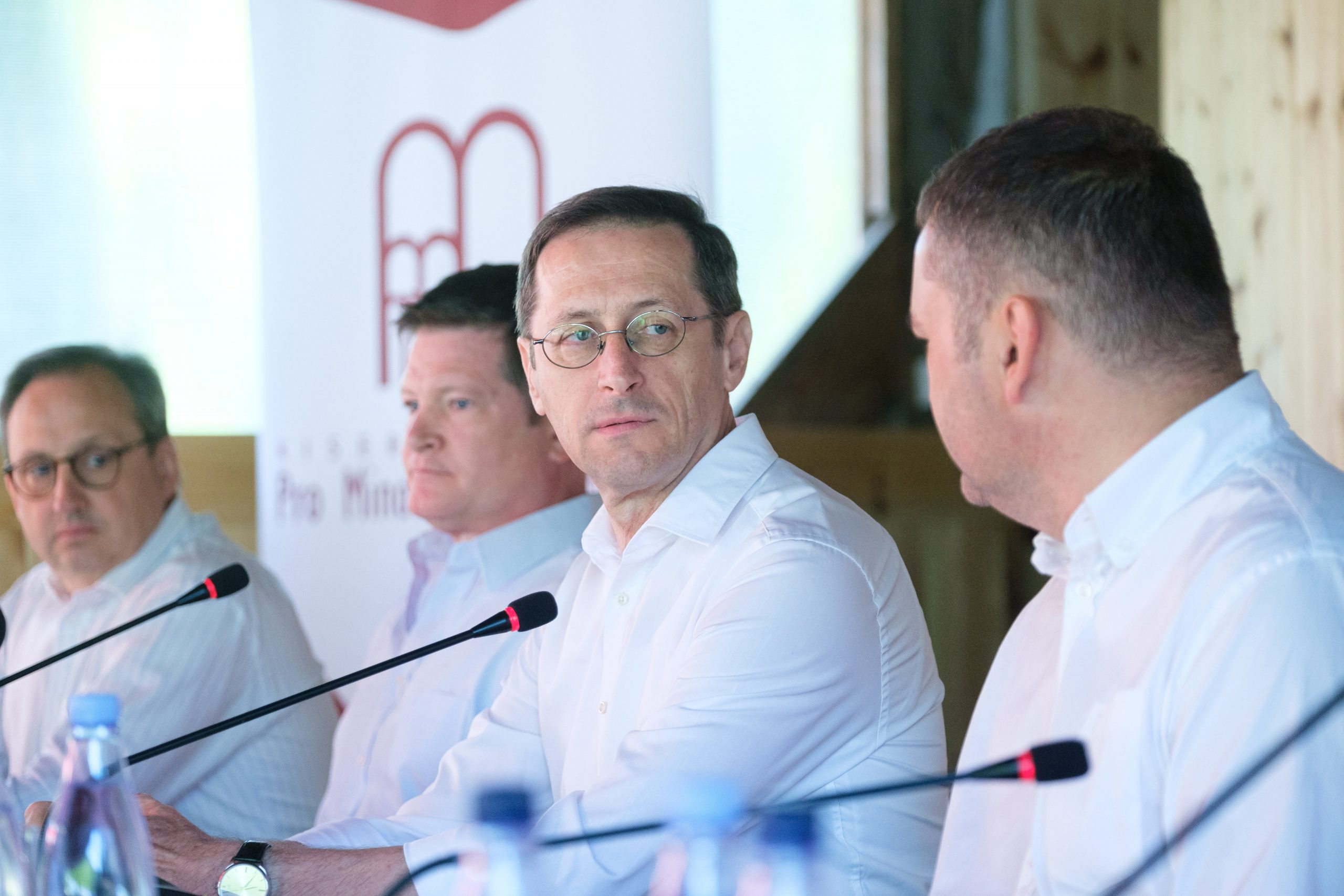 In his opening speech, Finance Minister Mihály Varga stressed that the European Union is essentially weakened by its own sanctions, the question is whether it can survive the punitive measures against Russia.Continue reading

The fundamental question is who benefits from this war, said the prime minister. “The Russians are the main beneficiaries, because they have the energy resources. Today the Russians are selling less energy but at a much higher price, so they have benefited. But it has also benefited the Chinese, who used to be at the mercy of the Arabs in terms of energy dependence, but now they can buy Russian energy. And American companies are also doing well. However, the EU is doing badly because its energy imports are in the red,” he said.

Europe is facing a major recession

Mr. Orbán said that Europe is plagued by the prospect of recession, and the situation in Hungary is also made more difficult by the fact that the strengthening of the dollar against the euro automatically leads to a weakening of the forint. Hungary has set itself a goal for the next two years, namely to stay of the global recession, he said. But in the prime minister’s view

only the next US presidential elections could bring back peace to the world.

“We can maintain our success in economic terms if we stay out of war, gender stupidity, global taxes, migration, the general recession in Europe. The good news is that we managed to do this in 2010 and 2020. In 2020, Hungary was ‘ahead of the curve’ in the crisis”, the Hungarian leader said.

According to the Prime Minister, Hungary will be a net contributor to the EU by 2030, which will also create a new situation for Hungary. “By that time, we must be in top form in diplomatic, military and economic terms”, Mr Orbán pointed out.