Hungary along with several other European Union member states supports the idea of a strong Europe of strong nations, Justice Minister Judit Varga said at the Summer Open University in the Carpathian Basin held in Sátoraljaújhely, in north-eastern Hungary, on Thursday.

Varga told a panel discussion on minority protection that the European Union was experiencing a clash of two conflicting visions on its future.

One, she said, wanted strong cooperation among strong member states, while the other was a federalist vision looking to transcend nation-states and weaken natural communities and the concepts of the family, the nation and identity.

“The government is continuing its fight in Brussels on this issue, constantly pointing out the use of double standards,” she said.

Asked about Hungary’s six-month presidency of the Council of Europe, Varga noted that Hungary will organise conferences on the issue of minority protection in both Budapest and Strasbourg to increase “international sensitivity” to the issue.

Addressing the opening, Zsolt Németh, the head of parliament’s foreign affairs committee (Fidesz), said it was Hungarians’ openness to success, rather than conformity to expectations from the West, that was the key to their own and Europe’s future. He said central Europe had the potential to restart “like a Mercedes-Benz” after the pandemic, and “become a success story in which Hungarians also have a role”.

The principle of “your success is my success” will be the future for Europe, while “national minorities are both the engines behind and the beneficiaries of that approach”, Németh said.

The Fidesz politician insisted that central Europe was a “region of freedom” with peoples rejecting external pressures “whether from the Habsburgs, the Ottomans or Communists” as well as “the pressure from Brussels, which has recently surfaced”.

“This theoretical basis has a clear ideology, which we could call a right-wing renaissance, which determines the future ideals of a national identity, and approaches to the current state of Christian Democracy and national sovereignty,” Németh said. “Together we can resist divisive attacks, no matter what part of the world they should come from.”

Meanwhile, Finance Minister Mihály Varga told reporters after a panel discussion on the economy that central Europe’s economic recovery would be stronger than the European Union average.

Hungary’s government projects strong economic growth in the region over the coming months, Varga said. Central European countries could even see faster growth than before the pandemic, he said, adding, however, that increased consumption was likely to lead to rising inflation.

The government has allocated more than 2,000 billion forints (EUR 5.6bn) towards supporting investments as well as job preservation and creation in the 2021 and 2022 budgets, Varga added. 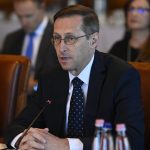