Sarjú Banda to Tour in the USA

Hungarian folk music band Sarjú Banda is going on a ten-day tour in America. The six-member group was founded in 2016, when the winners of the folk dance and music competition “MTVA Felszállott a Páva” formed a group. Their ages range from 14 to 20 and they will go on tour during their fall break.

Members of Sarjú Banda are Áron Horváth (cimbalom), Bendegúz Csoóri (double bass), Szabolcs Szilágyi (viol), Tibor Gál (singing)
Artistic director: Barbara Kuczera prímás and folk music teacher
Guest artists:
ISTVÁN BERECZ, winner of Hungarian talent show “Felszállott a Páva” in the soloist category, later member of the jury of the show, where he began to closely cooperate with the Sarjú Band. Furthermore, he received the “Örök aranysarkantyú” (“Eternal golden spurs”) National Folk Dance Soloist prize and is the folk music director of the Budai Fonó Music House.
DIANA SANTANA CADENA, Hungarian and Ecuadorian architect. She dances in the Bartók Folk Dance group in Budapest. In 2019, she has been the cultural ambassador of the diaspora in New Jersey in the frameworks of the Kőrösi Csoma Sándor Program.

They can now take their first CD, Kedvenceink (Our Favorites), with them on the tour, featuring a selection of some of their best music to date. 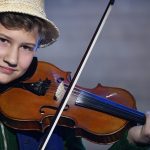