A liberal commentator thinks that despite the tense and personal exchange between Dobrev and Márki-Zay, there is no vast ideological cleavage between the opposition candidates. A conservative columnist suggests that the debate may help the opposition boost its visibility and broaden its base.

Background information: In the third televised prime ministerial primary debate, and the first of the run-off, the two remaining candidates agreed that the opposition needs to show unity in order to defeat Fidesz next April, and also that the Constitution – or at least some of its provisions – should be suspended even if the new government does not have the required two-thirds majority in Parliament. Before the debate, Péter Márki-Zay accused former PM Gyurcsány and Democratic Coalition of trying to blackmail other opposition politicians. He also said that Fidesz is promoting Dobrev’s campaign in the hope that she will win the primary.  Klára Dobrev accused Márki-Zay of putting forward a new lie each day, adding that he has borrowed the Fidesz rhetoric of targeting Ferenc Gyurcsány.

444.hu’s Gergely Plankó thinks that despite the tense personal exchanges, the two candidates’ visions are very close to each other. The liberal analyst points out that both Dobrev and Márki-Zay promise to investigate current government corruption and suspend the Constitution. The real debate between the two candidates is about which is more likely to defeat Fidesz in April, Plankó concludes.

In Magyar Hírlap, Ervin Nagy sees the rivalry between Dobrev and Márki-Zay as a gimmick intended to broaden the base of the opposition. The conservative commentator describes the opposition scheme as a division of labour between Márki-Zay, who wants to woo right-wing and anti-Gyurcsány voters, while Dobrev aims to expand opposition support to the ‘left fringe’. Nagy therefore thinks that their televised conflict and fierce exchange may not do any harm to the opposition’s chances in the 2022 Parliamentary election. 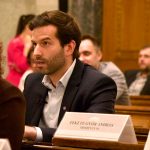