Pope Francis: “My wish is that you be grounded and open, rooted and considerate”

Pope Francis highlighted the courage of Saint Stephen, Hungary’s first Christian King, and Elizabeth of Hungary as examples of meeting Jesus Christ at the closing mass of the 52nd International Eucharistic Congress in Budapest on Sunday.

Pope Francis greeted crowds in Budapest in the open-topped popemobile on his way to Heroes’ Square to celebrate the closing mass of the 52nd International Eucharistic Congress on Sunday.

Following a meeting with religious leaders at the Museum of Fine Arts, the popemobile turned down Andrássy Avenue from Dózsa György Street and travelled until Kodály Körönd, before turning around and returning to Heroes’ Square. 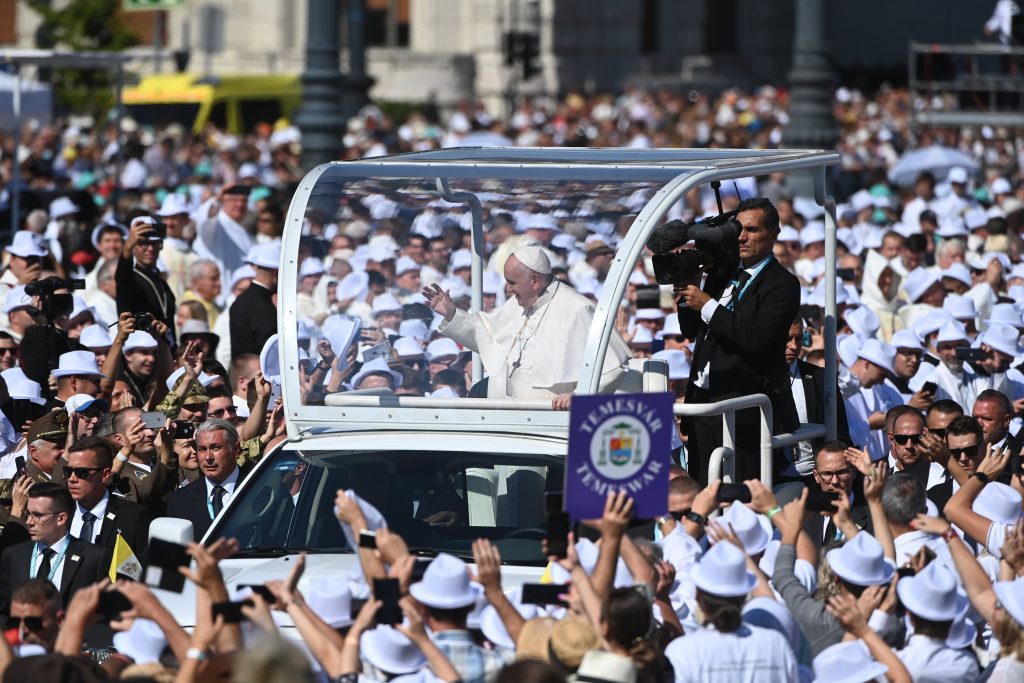 Many in the crowd waved Hungarian, Szekler, Polish, Spanish, Portuguese and Vatican flags.

Pope Francis highlighted the courage of Saint Stephen, Hungary’s first Christian King, and Elizabeth of Hungary as examples of meeting Jesus Christ at the closing mass of the 52nd International Eucharistic Congress.

Francis called on the faithful gathered for the mass in Heroes’ Square to “allow the meeting with Jesus to transform us in the eucharist the way it transformed the great and courageous saints whom you respect like Saint Stephen and Saint Elizabeth”.

Francis said that although the Eucharistic Congress marked the end of a journey, it should, more importantly, mark “the beginning of another”.

He said the meaning of God was not found in the catechism but required “a vital personal response”.

The pope said that although the Cross had never been “fashionable”, it brought “inner healing”. He said the debates and fights around the Cross were a clash of God’s logic and the world’s logic.

God’s logic, he said, was “humble love”. God’s path is “free of all compulsions” and seeks what is good for others, the pontiff said. Meanwhile, the world’s logic, he said, sought appreciation, prerogatives, favourable judgement and success.

Pope Francis said the difference was not about who was or wasn’t religious, but between the “true God” and “the god of oneself”.

Pope Francis: ‘May the Cross link the past, future’

Pope Francis expressed his wish that the Cross be “the bridge between the past and the future” for those gathered for the 52nd International Eucharistic Congress in Budapest.

Before reciting the Angelus prayer at the end of the closing mass of the congress in Heroes’ Square, the pope said the feeling of religion was what gave life to the Hungarian nation.

However, the Cross planted in the ground “not only invites us to be well-rooted, but also reaches high and extends its arms to everyone”, he said.

“The Cross invites us to be firm in our roots, but we must not be satisfied with this,” the pope said, adding that the faithful should also “draw from the fountain and give drink to those who thirst in our time”.

My wish is that you be grounded and open, rooted and considerate”

He said the Mission Cross called on the faithful to preach the Gospel and the message of God’s eternal love. “In today’s world hungry for love, this is the nourishment that all Hungarians crave,” he said.

The Pope thanked what he described as “the great Hungarian Christian family”, which he said he wanted to “embrace in its rites, its history, its brothers and sisters, both Catholic and those of other confessions: all journeying towards full unity”.

He also thanked Bartholomew I, the Ecumenical Patriarch of Constantinople, the bishops, priests and believers who gathered for the congress, as well as the event’s organisers.

“God bless the Hungarians”, the Pope concluded his prayer in Hungarian.