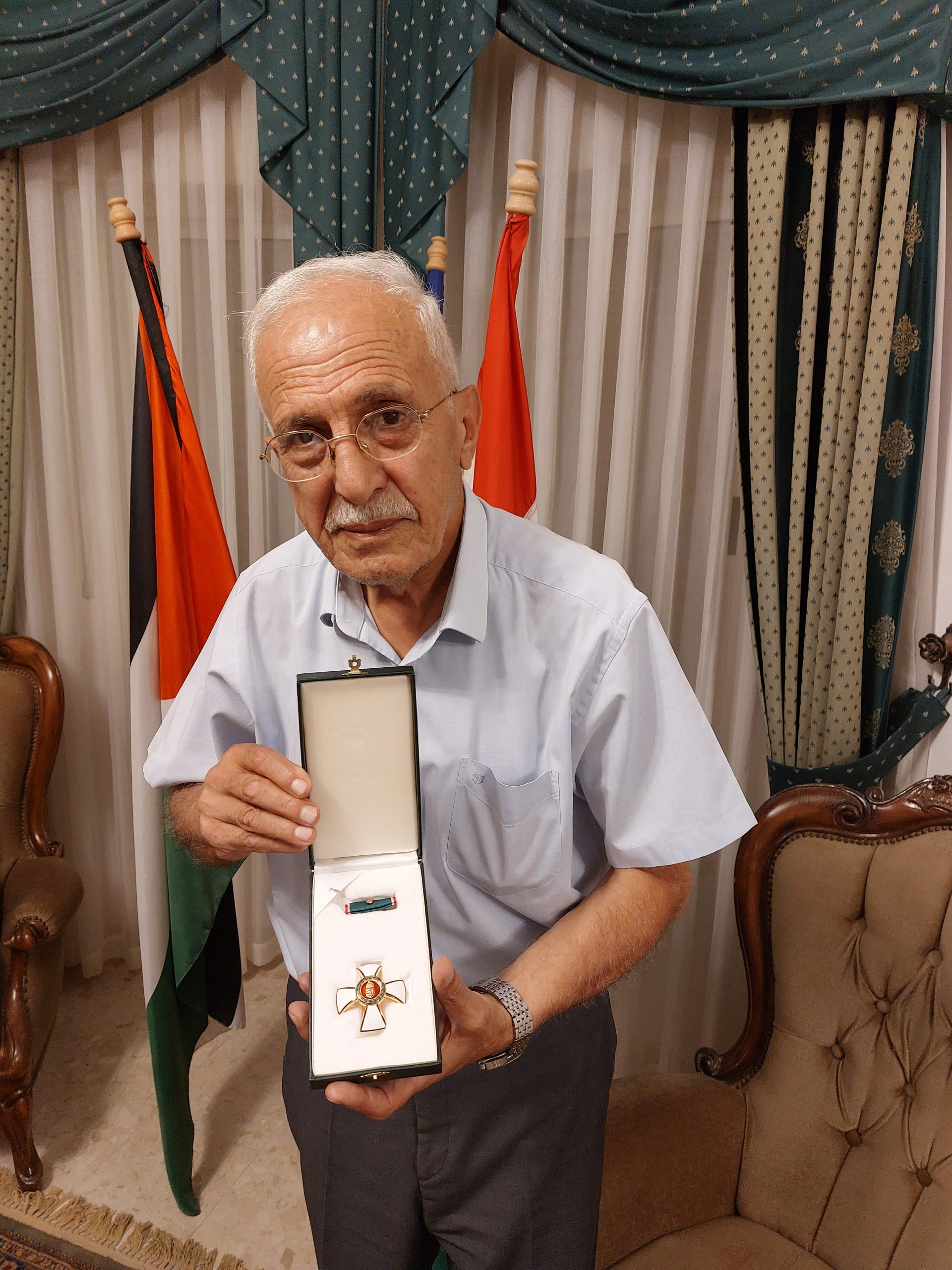 Dr. Khamis Nassar lives in a town near Bethlehem, Hungary today has visited him in his private residence to ask about how Palestinian politicians and people on the street view Hungary. Dr. Nassar, a retired gynecologist, was the first Palestinian university student to complete his studies in Hungary. He has started his studies in 1967 and returned to his homeland in 1975.

– How do you look back at the years spent in Hungary during your youth, and how did you manage to preserve your Hungarian language skills so well?

– Due to travel restrictions, I was able to return to Budapest only in 2017 but it was a moment as if I had returned home. All in all, I have spent 11 years in the country and I can proudly say I know it better than most Hungarians. I was able to preserve my knowledge of Hungarian despite it being a difficult language, I have never forgotten it. When I returned to Palestine, I brought back some books and my friends have supplied me with magazines. Then suddenly the internet has arrived. Nowadays I start my day with reading local news, then I continue on with the Hungarian ones. I listen to the Hungarian news broadcast as well but its not as good as it used to be. However, I watch sports and I am always proud when Hungarian sportsmen do well. 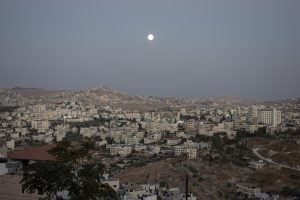 An evening view of the town of Bethlehem. Photo: Hungary Today.

– How did you end up being the honorary consul for Hungary?

– I am not even sure. This is the honest answer. There was a famous researcher visiting from Hungary, Dr. Béla Jungbert. He was very knowledgeable in local history. We had a lot of common topics, he was the head of the head of the head of the Hungarian branch of the Order of the Holy Sepulchre in Jerusalem. Although we argued a lot, we still became friends. Through him I got to know Imre Kozma, the Chairman of Hungarian Maltese Service. Eventually he was the one who asked me: what would you say to becoming a honorary consul? But beware! There is no money, no privileges. Only the appointment itself.

– What does your work consist of?

– I do all sorts of things because I feel I must return something to the people of Hungary. Back then, they gave me a lot too. What I do though, I do it in my spare time.

There is for instance this aid program in Palestine called Hungary Helps. They are trying to help the local community. Hungary Helps offers scholarships to Christians who are nominated by their local community or church. I am trying to be a mediator in this, to tell them what is needed locally. Another initiative is a scholarship where we have 200-250 Palestinian students in Hungary. In the past 8 years I was working as the member of the selection board who decide who should receive the scholarship. They submit their application, their CV, and then we proceed to the interview. Apart from me there are two Hungarians there, the Hungarian Ambassador to Palestine Csaba Rada and his deputy, and two Palestinians Ministry of High Education officials.

The third thing I am involved with is a little advertising for Hungary. We are doing rather well, there are currently 5-6000 people applying for a visa for Hungary. I help with that too. But if I am asked anything else, I am happy to help. If, for instance, there is a delegation of journalists, they want to come over for a coffee and an unofficial talk, I am happy to receive them.

– Is not it rather difficult to advertise Hungary in Palestine today? We have met people who are bewildered by Hungary’s strong support for Israel.

– People are not interested in this. Look, I know former President János Áder, current President Katalin Novák, Prime Minister Viktor Orbán, Foreign Minister Péter Szijjártó, or former Prime Minister Ferenc Gyurcsány. They all came to visit. But Hungary has some economic difficulties, the economy must be rebuilt. I think the annual trade between Hungary and Israel exceeds that of the trade with all the Arab states put together.

Another thing is that our reputation, that of Arabs, is not very good in Central Europe. The Israelis have a much better one. In these countries, in Hungary, Serbia, Slovakia, etc., they often generalize when they speak about Palestine. They accuse us of corruption, while this is not a problem restricted to Arab states, there is some corruption in most governments. Similarly, Arab states have a generalized view of Hungary but Hungarians only want to exercise their rights. The Arabic opinion does not know the situation in Hungary, neither in the political, nor in the everyday sense.

I will tell you a few words about how similar the history of Hungary and Palestine is. After the Versailles peace treaty in 1920 Hungary has lost two thirds of its territory. No one denies this. In 1948 Palestine has lost almost 80% of its lands. Hungary has a population of ten million, but there are also some 5-6 million ethnic Hungarians living beyond its borders. It is the same with the West Bank: there are some 6 million people living here and another 6-7 million who cannot return. It is a Hungarian saying that the law is always on the side of the stronger one. Israel is much stronger and there is nothing we can do about this.

Take for example the news from yesterday, when Israel has admitted to the killing of Palestinian-American journalist Shireen Abu Akleh. Few know about this. But they only admitted to this as an accident. This is what they refer to as – who can win the media, can win the war too. 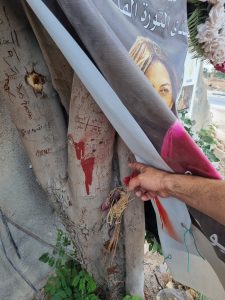 The spot in the town of Jenin where Palestinian-American journalist Shireen Abu Akleh was shot dead by Israeli forces. Photo: Hungary Today

Something similar is happening in Ukraine too. Zelenskyy is complaining about being attacked from all sides. But he seems to forget what he himself has done to the Hungarian community living in his country. But still some are singling out Hungary for its close ties to Israel.

– Have you received any recognition for your work?

– Yes I have, the Hungarian order of merit. I was awarded the order by Prime Minister Viktor Orbán but received it from Deputy Prime Minister Zsolt Semlyén while he was visiting here. I was given this award for my work on behalf of the Palestinian-Hungarian relationship. 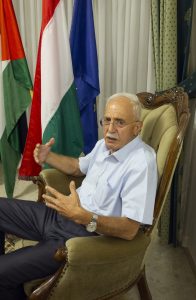 You know there used to be an Israeli military checkpoint some 200 meters away from my house. The soldiers were visiting here on a daily basis from 2002 to 2012. My house was shot at twice in the past. In 2006, when my daughter was only seven, she was wounded. They shot through our window from the outside, the bullet had ricocheted off the wall and hit her in the leg. They blamed the incident on shots allegedly coming from my house but there was no one shooting from here for sure. When I became a honorary consul I was not allowed to hang the Hungarian flag outside my house. They said you can do that only in an embassy. But I did it anyway and since then no one has dared to raid our place. They tried twice though. The first time I went out to meet them and told them that this is a foreign sovereign territory, this is Hungarian land. The second time they came, I asked their officer to come to the window. I said, “do you know what this flag means? Sorry then, you’ll have to go”.

The common perception is that we hate the Israelis. I do not, honestly, I do not. I worked in an Israeli hospital for two and a half years, just after I returned from Hungary. That is where I have learned to work with ultrasound. I had a very good teacher, an Israeli doctor. I should say, a Jewish doctor. We had a very good relationship. But the current military’s way of thinking, and the Israelis sense of superiority, that I do not like. Claiming to be the chosen people will not cut it with me.

Alas the Palestinian media is not strong enough to be able to pass on the sentiments of everyday people, while the same time, the situation is getting more difficult. In the old days, we had a direct occupation. Today we have a concealed one. Before we used to be able to go to Jerusalem, today it is only possible with a special permit. I would also like to go to Tel Aviv, the Hungarian Embassy there organizes a number of events to which they often invite me. But I am not allowed.

– I have met a number of Palestinian politicians in the past days, I was surprised to learn that there is an atmosphere of mistrust towards the Hungarian government.  They say we are too close to Israel, we want to open an embassy there, plus that we have blocked a number of EU resolutions condemning Israel’s treatment of the Palestinians. How do you feel about this?

– Hungarian governments represent Hungarian interests. Hungary’s chief interest is economic development. And let us not forget that there is a very strong Jewish community in Hungary, Arabs, in contrast, exercise no such influence. This influences the Hungarian public opinion. As far as the Hungarian Embassy in Jerusalem is concerned, I keep explaining to everyone that Hungary has not relocated its embassy there. They have opened a foreign trade office, and even that is in West Jerusalem, not in the East. A lot of people do not want to understand this. 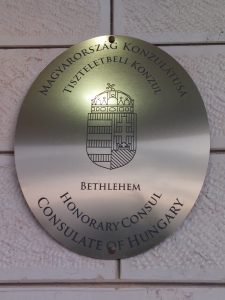 – Is it possible for the Hungarian government to have an Israel-friendly politics that does not offend the Palestinians?

– Its not the point here. If I am looking after the interests of my homeland then what others say is not decisive. Critics also forget that the Israeli-Hungarian friendship has many preludes.

– When you talk to ordinary Palestinians, most will not follow what is happening in Hungary. But of those who do, what are the things that are best known about Hungary?

– Three things: it’s a beautiful country, the people are kind, and that they oppose mass migration. That is what they know.

– Another thing that has come up is that the Hungarian government’s anti-migration policies are anti-Muslim. That they oppose immigration because most of those who come are Muslims.

– The Hungarian leaders often emphasize that they want to preserve the Christian foundations of their statehood. I am pro-migration but with a very important caveat: if you come to my land, you have to live like I live. You are not allowed to change the way ordinary people live their lives. It is none of your business whether I eat pork or drink wine. None of your business whether I wear long trousers or short ones. So on its own right, migration is not the problem. 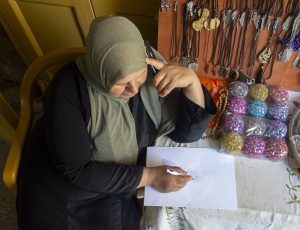 A Palestinian woman scribbles away on a piece of paper in the town of Hebron. Photo: Hungary Today

– Your ministers have no knowledge of the Hungary Helps government aid initiative being active in Palestine. Not even some members of the Christian community know about it. What can you tell us about these programs here?

– The Hungarian government is doing things really well but they are very weak in advertising it. Half a year ago the Hungary Helps program has given half a million euros to Catholic schools, here as well as in Jordan. They also provide 60 scholarships to Christians annually. In other words, what they do is really excellent but they are not advertising their achievements effectively. If an American or Brit sneezes, the whole world knows about this. But when Hungarians achieve something, no one hears about it.

The interview was conducted in Hungarian.

No part of the interview or photos can be reproduced or republished without the written permission of the editor-in-chief of Hungary Today.