Hungary Aims to Be Climate Neutral by 2050

Hungary aims to be climate neutral by 2050, and the government is examining ways to reduce carbon emissions to the level that Hungarian forests can absorb by that time, the state secretary for climate, energy policy, and the development of the circular economy said.

State secretary for climate, energy policy, and the development of the circular economy Attila Steiner told Portfolio’s Sustainable World 2021 conference that the government launched its National Clean Development Strategy to achieve those goals. The 2050 deadline has also been enshrined in law, he noted.

Hungary reduced carbon emissions by 32 percent between 1990 and 2019 — putting the country in the top third of European Union emission slashers — while its economic performance skyrocketed, Steiner said. “Hungary successfully decoupled emissions reduction from its economic trajectory,” he said.

Regarding the funding of the green transition in Hungary, Steiner noted that the government’s green bonds are oversubscribed multiple times. Profits from the bonds will go towards green projects, among other resources, he added. 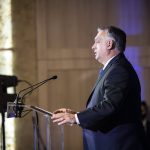