The National Bank of Hungary welcomes the decision of Moody’s Investor Service to upgrade Hungary’s sovereign rating to Baa2 from Baa3, the central bank said after the ratings agency issued its decision late on Friday.

As the central bank has repeatedly indicated, Hungary was ripe for another upgrade, justified by its rapid economic recovery from the coronavirus crisis and the preservation of its financial stability, the bank said.

In response to the decision, pro-Fidesz economic research institute Századvég said it definitely came as a surprise that Moody’s upgraded Hungary’s sovereign rating.

“Although there has been a positive outlook on the rating for a year now, considering the pandemic, it could be expected that an upgrade will occur later, in six months or a year, if at all,” Gabor Regos, head of the institute’s macroeconomics division, said.

With Moody’s decision, Hungary’s sovereign rating is now at the same level at the three big ratings agencies, he noted.

The outlook on the rating is stable. 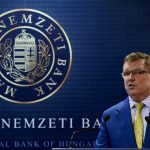