László Palkovics, Hungary’s minister of innovation and technology, on Friday addressed an event launching a series of infrastructure projects to construct a bridge between Kotoriba in Croatia and Murakeresztúr in Hungary over the river Mura, as well as the roads leading to it.

Palkovics noted that the construction of the final stretch of Hungary’s M6 highway started in February. When that project is finished in early 2024, Hungary will have two highway connections to Croatia and will have completed the Hungarian stretch of a north-south corridor between the Baltic and Adriatic Seas, he said.

While motorways play a role in international transit and long-term economic goals, small-scale transport development between the border regions will boost the connections there, he said. 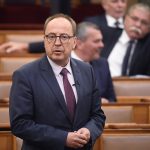