The plaque was proposed by Snopek during preparations for the annual Polish-Hungarian friendship celebrations in Veszprém in 2018.

Addressing the dedication ceremony, Snopek said the plaque was aimed at further developing the friendship between Poland and Hungary, “in which Lech Kaczynski was a staunch believer”.

The plaque was designed by renowned Polish sculptor Michal Wisnios and its creation supported by the Polish Embassy in Budapest, the Veszprém County local council, the Office of the President of the Republic of Poland and the National Polish Self-government of Veszprém. 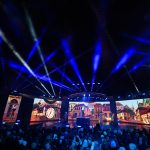