Participants of the Polish-Hungarian Summer University in Krasiczyn adopted a joint declaration on the future of Europe on Wednesday, urging a fundamental reform of the European Union.

In the declaration, they emphasised their sense of responsibility for their nations, the central European region and Europe as a whole, and underscored their commitment to Europe’s Christian roots.

The participants expressed their support for fundamental values such as the importance of the family, democracy, the protection of human dignity and the freedom of expression by law and the importance of social dialogue.

The participants called for a strong Europe and a fundamental reform of the EU, which they said should take into consideration the views of young people in central Europe.

The university students vowed to work together at political and civil forums for a “free, secure, strong and fair Europe” that is focused on recognising their own interests, values and problems instead of fuelling ideological polarisation and “waging a culture war”.

Prior to signing the declaration, the university students took part in a panel discussion on the future of Europe which was also addressed by Hungarian human resources ministry deputy state secretary Zsófia Rácz and former Polish house speaker Marek Kuchcinski.

Referring to recent criticisms levelled at Poland and Hungary in the EU, Rácz said the bloc had originally been established so that its member states could engage in sensible debates when they disagree rather than “attack each other”.

The five-day event, which opened on Monday, is focused on the future of Europe and is being attended by some 150 Polish and Hungarian students. It is being organised by the Waclaw Felczak Institute of Polish-Hungarian Cooperation. 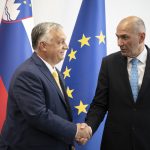