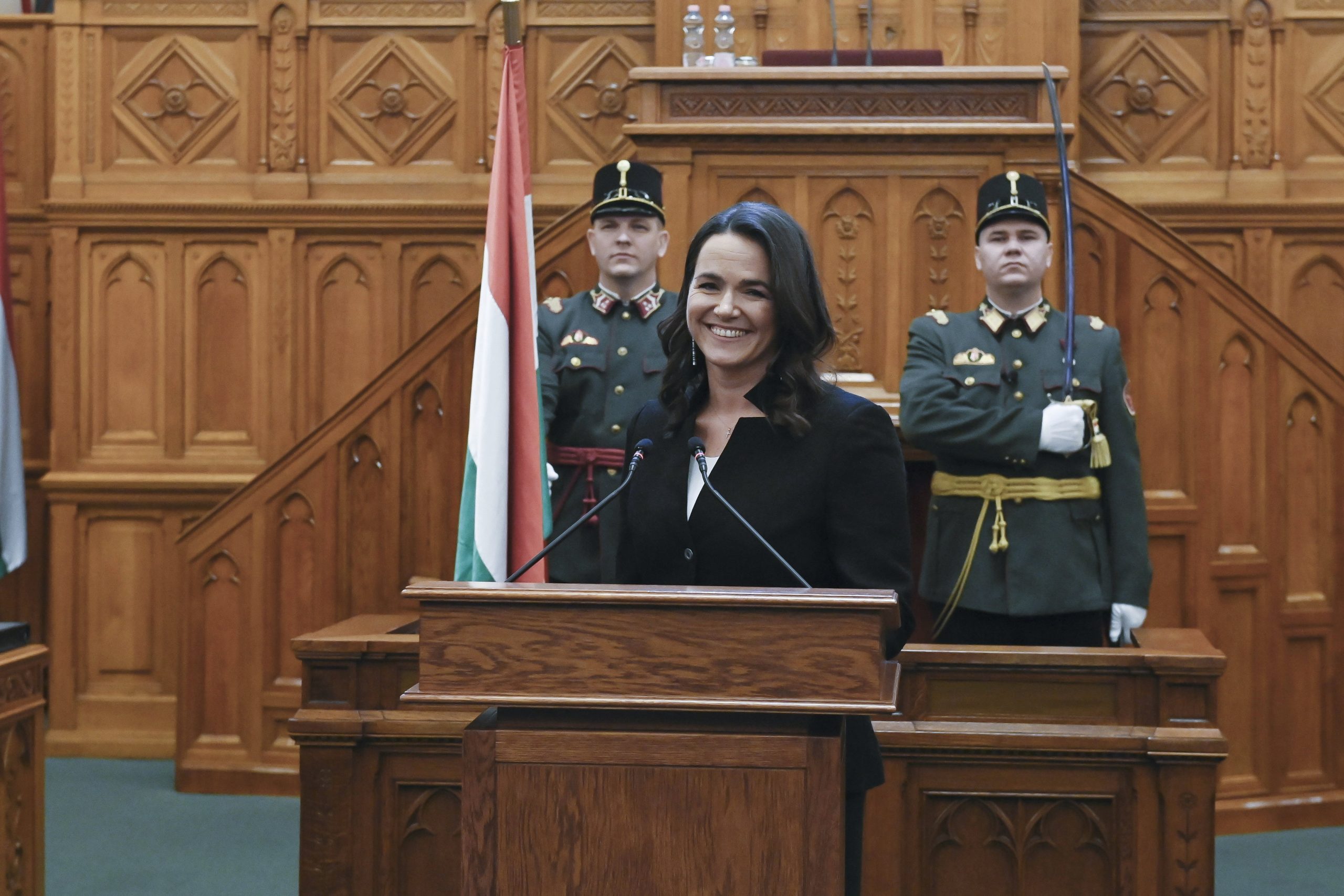 The new President of Hungary has been elected by a two-thirds majority in the Hungarian Parliament. Former Fidesz vice president and Family Minister, Katalin Novák, received the majority of votes at today’s parliamentary session. The ruling parties voted in her favor, while most of the opposition representatives voted against her. The presidential election was to be held in two rounds, but a second ballot was not required. Although President János Áder’s mandate will not expire until May 9, the ruling parties were able to ensure that someone from their ranks will hold the highest political office before the parliamentary elections. In her introductory speech, Katalin Novák called the Russian invasion “a destructive virus” and promised to work for the unity of the nation.

Members of parliament elected Katalin Novák as the new President of Hungary in a secret ballot,  with a two-thirds majority in the first round. The candidate of Fidesz-KDNP received 137 votes, while her opponent, opposition candidate Péter Róna, obtained 51 votes.

The election of the new president of the republic began at 9:30 a.m. with 15 minute speeches by each candidate.

Today the country elects a new head of state through you, the democratically elected representatives in the parliament,”

Katalin Novák said at the beginning of her speech, while still a candidate for the presidential office. She called the war launched by Russia “indefensible and inexplicable,” and stressed that this had stirred everything up, calling the attack a “destructive virus” at a time when “we were just beginning to recover from the epidemic.” 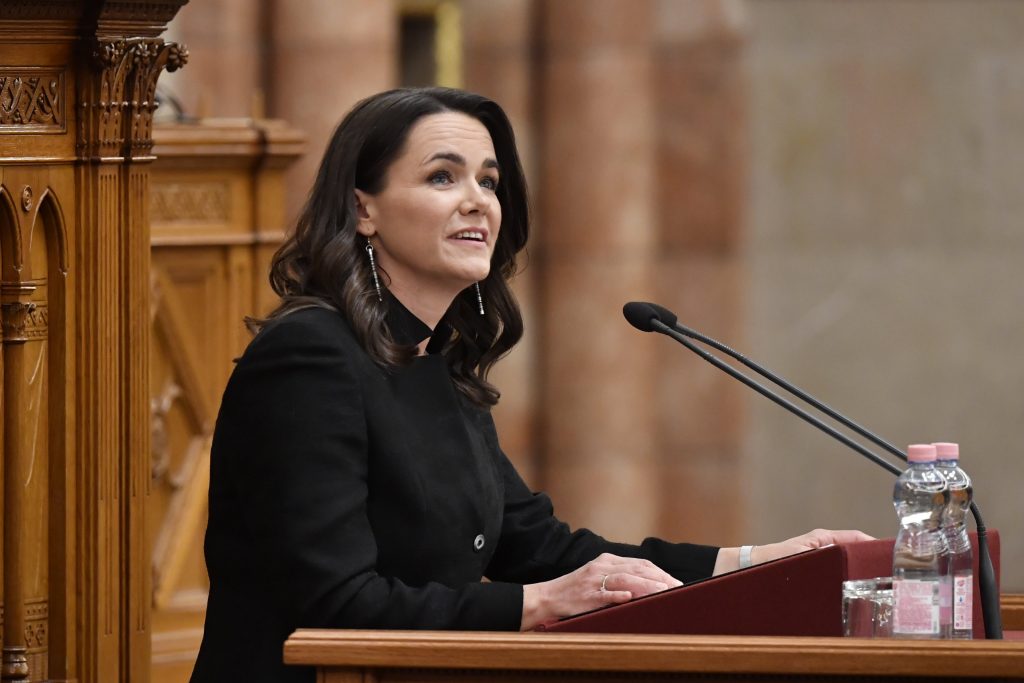 “There has been a war going on in our neighboring country for 14 days. I visited Transcarpathia last week with four bishops and expressed how Hungarians living there are as important as Hungarians in the motherland and refugees from Ukraine,” Novák continued.

Hungarians want peace and women want to win peace not war, because in peace we can build, prosper, and smile at each other.”

Novák also spoke about her first lifelong alliance, namely the alliance with her husband when she said yes to him at their wedding.

Having children was one of the most important decisions of our lives,”

Novák continued and said that although her husband will be the first “Firstgentleman,” he will remain who he is right now: ” István Veres.”

She thanked former Foreign Minister János Martonyi for teaching her the “art of classic diplomacy.” She also thanked Zoltán Balog, the former Minister of Human Resources who taught her that man is the most important resource of God, and the head of the Prime Minister’s office for his friendship. 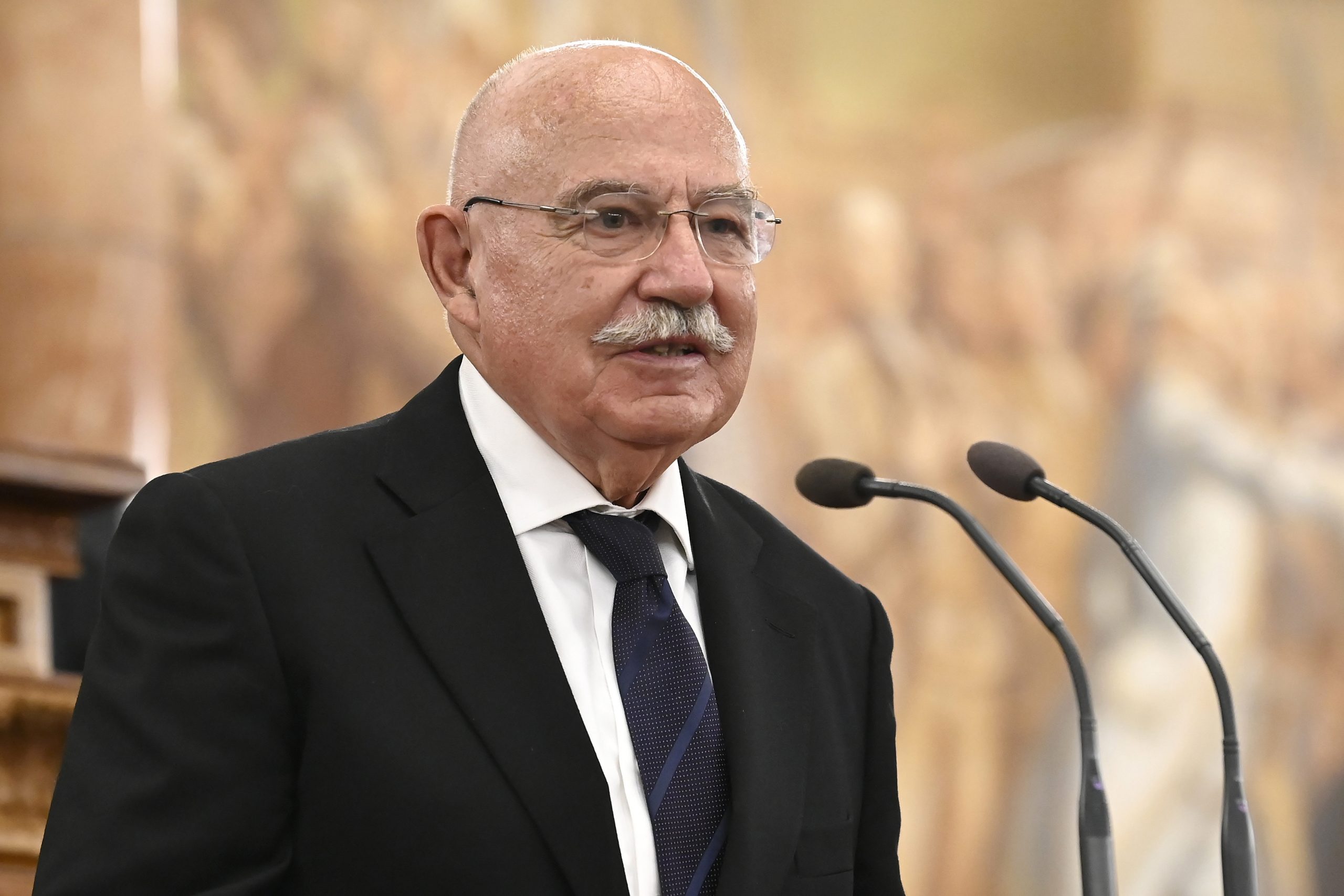 She also thanked Prime Minister Viktor Orbán for allowing her to be “part of the nation-building process.” Katalin Novák said that whoever is elected President has the task to show the truly beautiful face of the country in the next five years through his/her life, work, appearance, and deeds.

I am ready for this task, I am all prepared. I have to represent all Hungarians. I will remain who I am.”

She promised to use the talents given to her for those who need peace and understanding. “To do this, I will not take the cross from my neck, but I will press it to my heart.” She also promised to visit towns and villages or the Gypsy settlements, as well as Hungarians living across the border. One of her first visits will be to Warsaw. 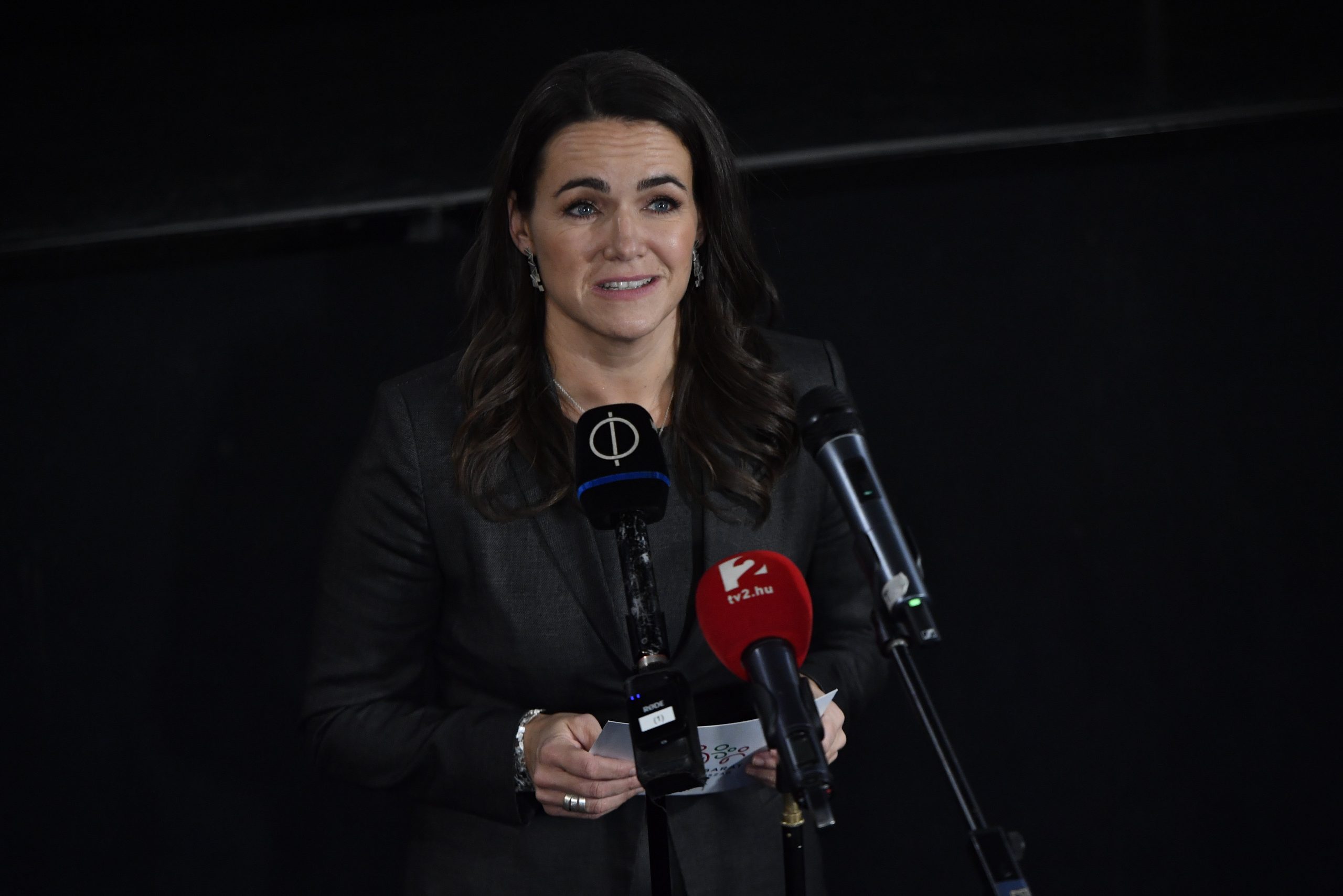 “I am a member of a generation that inherited a national autonomy ready to use, a generation that grew up in peace in Hungary. We did not have to risk our lives and futures for principles, for the freedom of thought and action. We will not allow anyone to play Russian roulette with our dearly obtained sovereignty,” she said.

Novák outlined that “Ours is a proud generation. We dare to walk holding our heads high. We are not impressed by anyone just because they speak English, and we can make it in foreign languages, and make it even abroad.”

“We did not have to learn what it was like to live under Russian occupation but were given an opportunity what it means to be part of Europe “in instinct, blood, pain and passion,” Fidesz-KDNP’s presidential candidate said, adding that “Many of us have studied and lived in Western Europe. We do not wish to mimic that world but they have some good things that we should adapt. It is worth deciphering the secret of the English turf, even if the Hungarian meadow full of flowers is dearer to our hearts.”

Hungary will never be Switzerland, and for us Lake Balaton is the Riviera, Kékes is the peak, Hungarian is our secret language, Bartók and Kodály are our brands in music, our neighbors are given. We belong to Europe, and Europe belongs to us and we cannot and do not want to change it,”

She also spoke about the fact that it was her task to lead the country to the heights of understanding, peace, and security. 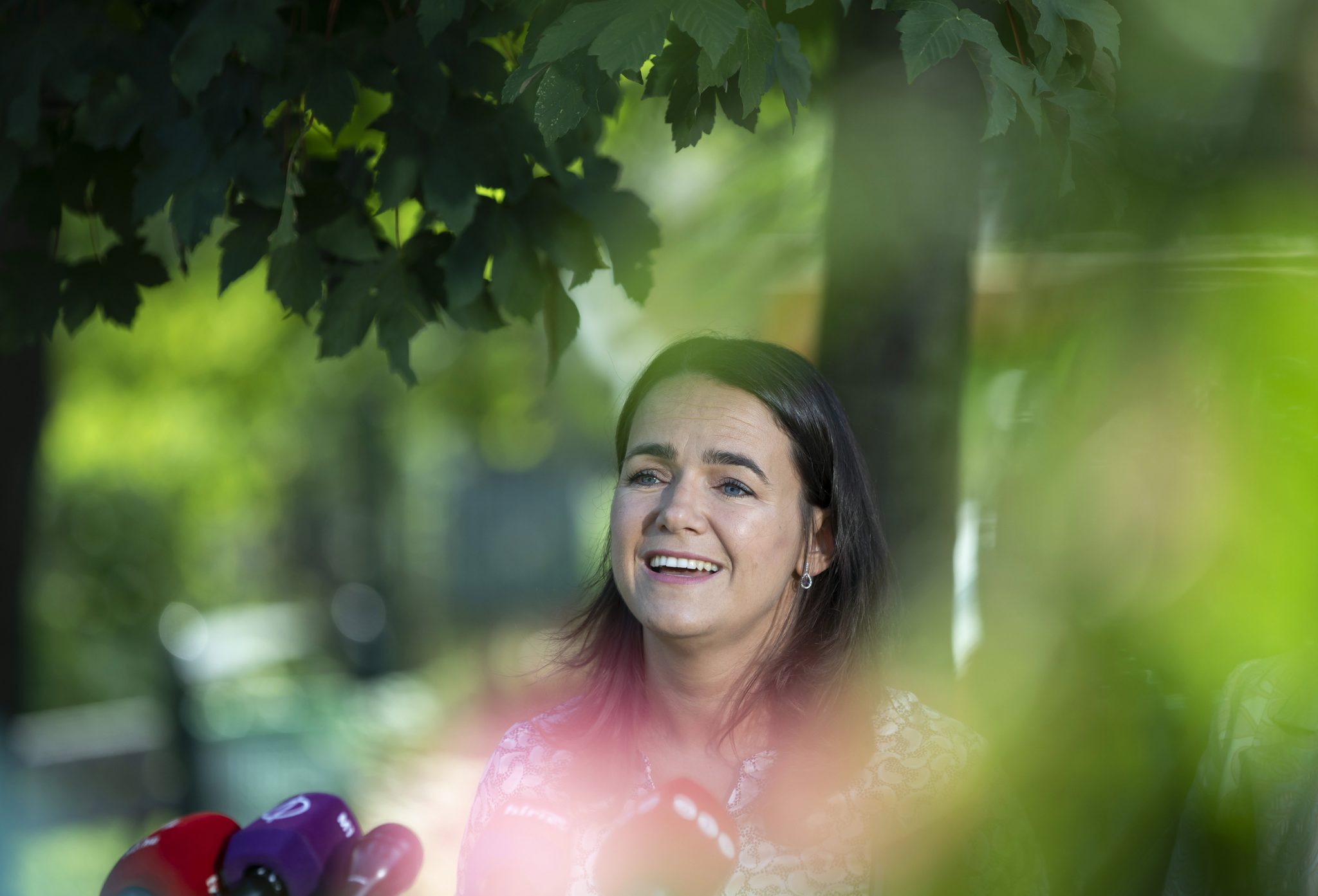 Three opposition politicians made it into the top 10 on Forbes' list concerning the most influental women in Hungarian public life.Continue reading

She asked: Who is Katalin Novák? and answered:

“She comes from the southern Hungarian city of Szeged, and without the legacy of her grandparents, she would not be who she is right now. As she said, she learned from her mother and father what they had received from their parents, namely values such as honor, integrity, and the ability to stand on both feet. They strengthened those skills with a lot of knowledge.”

We can always go on and start again, we can build, we can strengthen what is ours. As long as we have free will, we cannot be subjugated. The cradle of sovereignty is the family. I will never give that up.”

“It is primarily their task to show togetherness, but not alone,” she said.

Novák also spoke about the upcoming parliamentary elections and emphasized that April 3rd is a decisive moment for everyone, for all Hungarians. As President, she will stand on the foundations of Hungary’s constitution, the Fundamental Law. She will not work to eliminate the existing legal order, but to preserve it, Novák concluded her speech. 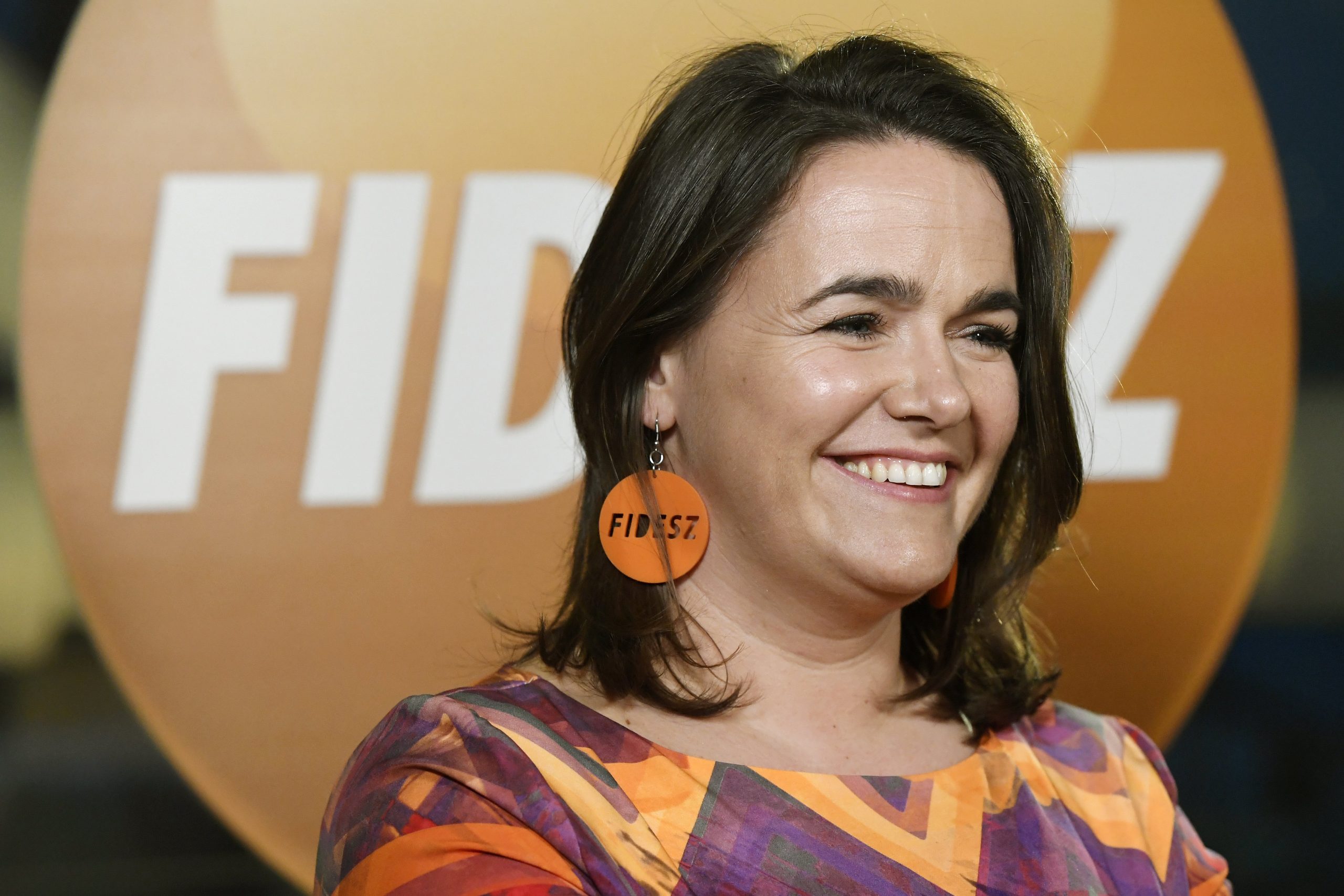 Katalin Novák is Hungary’s first female head of state. The opposition candidate was Péter Róna. We will report on his speech in a separate article.