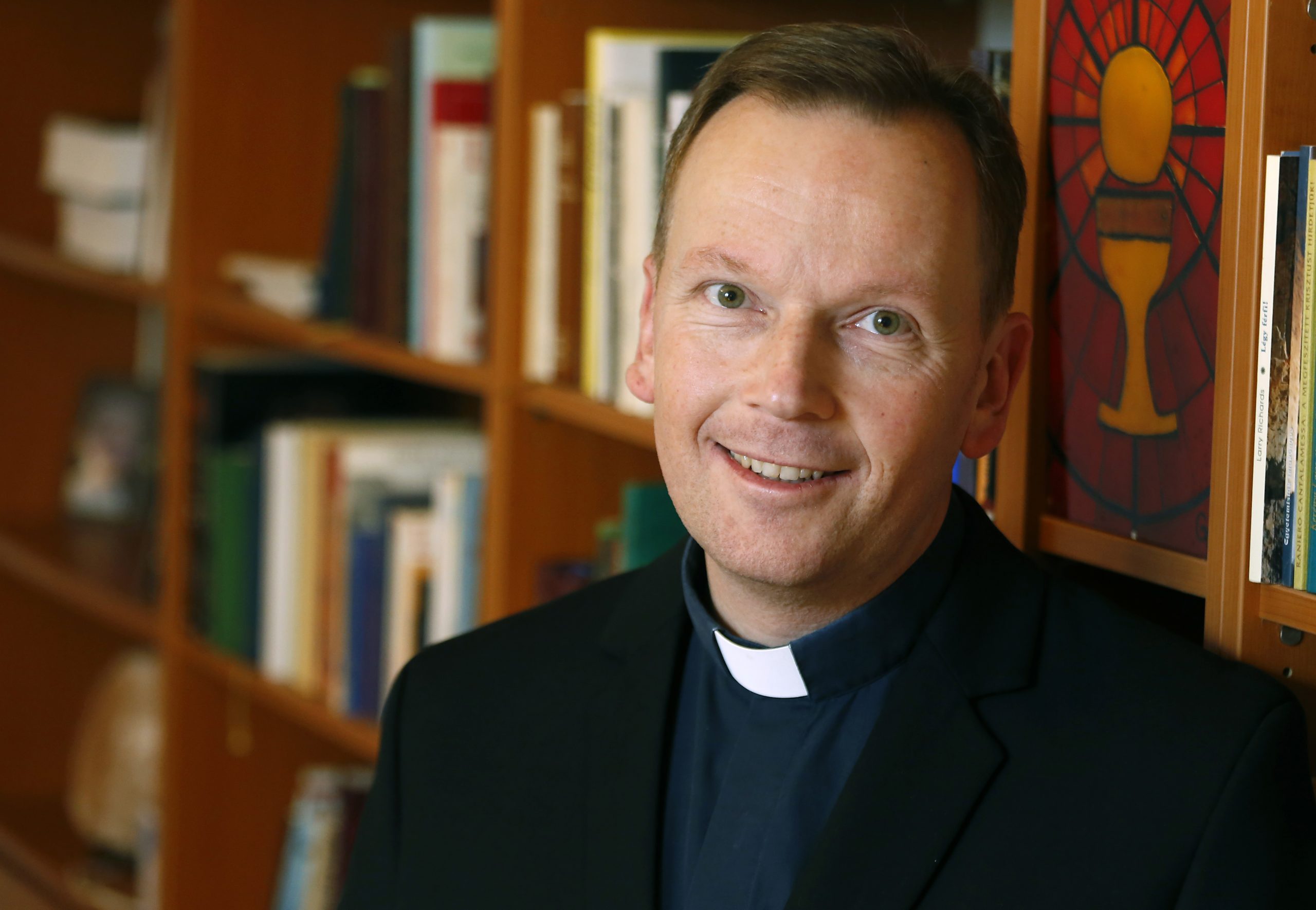 “I had the feeling that indeed, Jesus is among us,” Father Kornél Fábry, the chief organizer of the 52nd International Eucharistic Congress, told Hungary Today when asked about how he felt during the event. The Secretary General of this year’s IEC added that besides a lot of work, the preparation of the Congress also included an abundance of grace. Father Kornél also spoke about the meeting with Pope Francis, the successful hosting of the event, and gave his views on some of the criticism regarding the number of participants. Interview.

You decided to serve the Lord at the age of 22. You have mentioned in several of your previous lectures and interviews that it had never occurred to you before to become a priest, and that you were even outright frustrated if you were thought to be one. Then you went to a youth forum in Manila, and immediately after returning home you decided to become a member of the church. What happened on this trip?

In the past, whenever I thought of priesthood I quickly dismissed the idea. I was able to attend the 1995 World Youth Summit in Manila as one of Hungary’s delegates. It was a fantastic experience to celebrate Holy Mass with Pope John Paul II in a crowd of 4.5 million people. The topic was the evangelization of youth, which I was able to comment on at the Youth Forum. I took the opportunity. Then began a flood of questions: several different people found me one after the other, all of them asking me about priesthood. Some bishops and priests who were with us asked me if I had thought about becoming a priest myself. Then, when I got home complete strangers asked me whether I was a priest or a seminarian. It was all getting suspicious. God sent them to open my eyes: this is my calling. The decision, of course, I had to make myself. I think after that the Lord wiped his brow saying, “finally!”

The greatest joy for me was to take God’s mercy to the people. As a priest, I cannot only talk about it, but I can also give absolution. Do you need more than that?”

So in the autumn, I went to seminary and in 2000 I was able, as a newly ordained priest, to concelebrate with thousands of other priests and the pope at the World Youth Day in Rome. 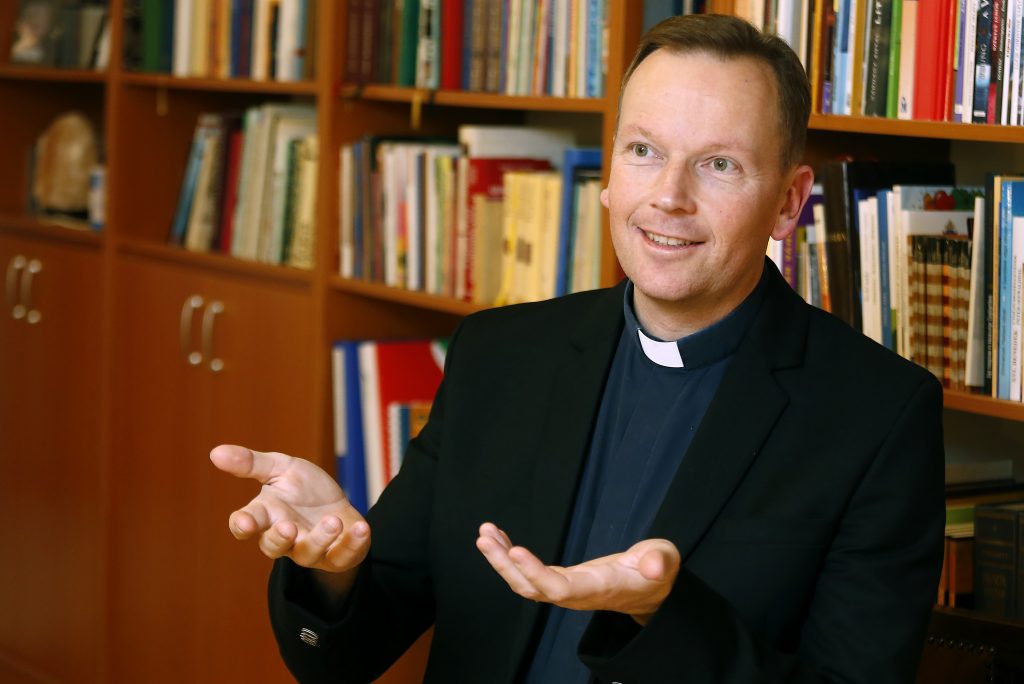 In 2016, Cardinal Péter Erdő entrusted you with the organization of this year’s Congress. Why did he pick you?

I asked him the same question. He said that everyone recommended me. Who “everyone” was is not entirely clear to me, but it is not important. As a member of the Emmanuel Community, the Eucharist, Holy Mass, and the Eucharistic adoration are very important to me. I love organizing. I participated in the 2007 City Mission in Budapest as a presenter and during the 2013 HungaRió as a program officer. Perhaps my practicality and love of the Eucharist seemed a good combination for this task.

Was the proposal unexpected or did you have a premonition? What was the first thought going through your mind?

It was unexpected. My first thought was: well, fine, but how can I do this when I am entrusted with the pastoral care of four settlements, teaching at two universities and a Catholic high school, etc.

So I asked the Cardinal for a few days to pray on my decision. At the end of an hour-long adoration, I received from Jesus a confirmation that my spiritual father called ‘more than obvious.'”

So my answer was this: I accept the task because Jesus asks me to.

You were originally scheduled to be appointed until 2020, but the Congress had to be postponed a year due to the coronavirus pandemic. What were the biggest challenges of organizing the event, and how did the pandemic add to them?

It was organized on two levels: spiritual and practical. It was a huge three-plus-eight-day event, which had to be carefully organized, from finding venues to hiring contributors, to budgeting, and hiring staff. And all of this was only to be fruitful if we are sufficiently prepared spiritually. It’s like a long jump: your performance depends on how you lead up to it. This is what the nicely structured, three-year preparation has been for, with an additional year dedicated to faith-related actions.

You met Pope Francis in person for the first time a few years ago, then as the Chief Secretary of this year’s International Eucharistic Congress. Did the Holy Father give you any guidance then?

When Archbishop Piero Marini introduced me as Secretary General at a preparatory meeting in Rome, the Holy Father simply said: „Molto lavoro, molto lavoro…” That is, “a lot of work, a lot of work…” He was right.

Did you have the opportunity to meet Pope Francis during his visit to Budapest? Did he say anything to you about this year’s IEC?

This time, when we were able to meet for a few moments after the mass, I recalled what he had said earlier and added: “yes, a lot of work, but also a lot of grace.” He nodded in agreement. I also had a nice surprise: I received the missal of the Pontifical Mass, which the Holy Father had signed for me.

The papacy of Pope Francis is often rather divisive, even among those who claim to be Catholic. Why do you think this is? What do you think of him?

I see him as the Vicar of Christ on Earth, chosen by the College of Cardinals under the guidance of the Holy Spirit.

Henceforth, it is not for me to judge or criticize him, but only to pray for him, as he always asks.”

What do you think of the 52nd International Eucharistic Congress?

Archbishop Piero Marini, President of the Pontifical Committee for International Eucharistic Congresses, said: under the current circumstances, we should be grateful that we were even able to organize it at all. I am full of gratitude to God and to all my colleagues who have helped to make this Congress possible. I think that it has been as much a beautiful experience for the people of the 21st century as the Congress of 1938 was for the people of that time. I hope that it will not be the end but the beginning of renewal. We are already beginning to see the fruits, so it was definitely worth organizing. 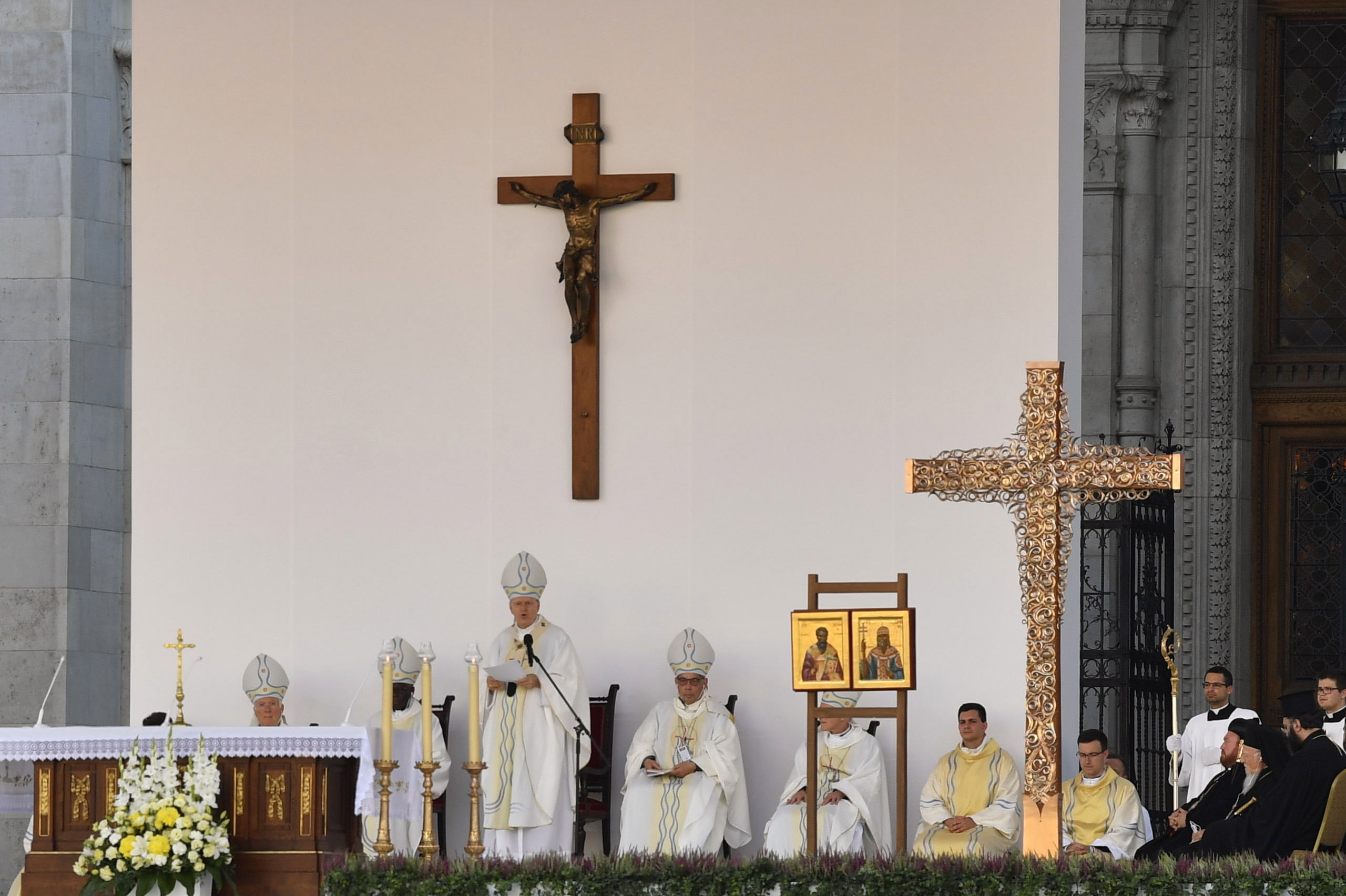 In his greeting to the pope, Erdő said the mass was a symbol representing "our unity around Christ under the guidance of the successor of Saint Peter".Continue reading

It might be difficult to choose, but which program was the most memorable for you?

The whole week was a huge celebration. I also have to admit that I didn’t get to many places, or if I did, I was often behind the scenes doing what was still needed, but if I had to highlight some of the programs, I would pick two: the Thursday evening Eucharistic adoration of the communities in St. Stephen’s Basilica, and the Eucharistic candlelight procession on Andrássy Avenue.

During both of these events I had the feeling that indeed, Jesus is among us, we are following Him, His kingdom is among us.”

Everyone’s eyes were sparkling; everyone was singing and smiling at each other. I agree with one remark about the entire week: it was good to be Catholic and Hungarian here. 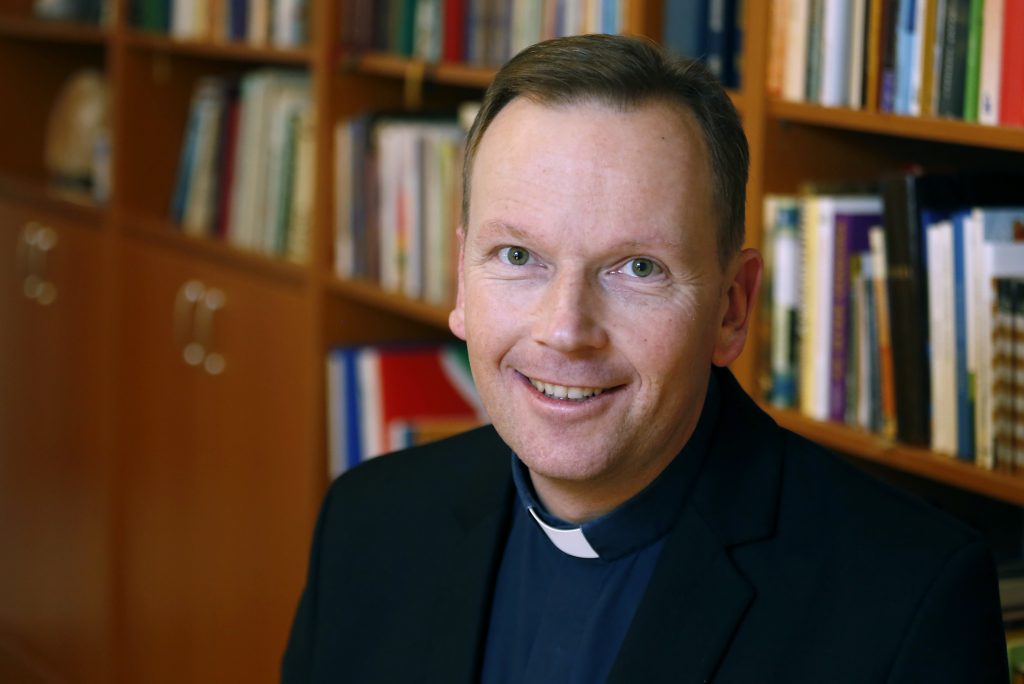 A minor debate broke out in the Hungarian press about whether the event was attended by many or few. There were some who thought that the number of people attending the Congress was not that high, while others felt a significant number of people were interested in the event. Which is the correct assessment?

Everyone was there who needed to be there and everyone followed the week’s events via TV, radio, and the internet, who had to follow them via these channels. Given the circumstances, I am not at all disappointed with the number of participants and followers. I also appreciate the fact that the programs of the Congress were and are still viewed by thousands of people afterwards, so participants are still joining, and the number of people who are tuning in is constantly increasing… God can touch people’s hearts through these channels as well.

Several articles condemned the Congress for not introducing specific epidemiological measures (mask mandate, social distancing, etc.) to the participants. Having an immunity certificate wasn’t a requirement either. What was the reason for this decision?

It was not our decision, but of the Hungarian Parliament. We had stressed all along during preparations that we would act in accordance with the then current rules. When the decision was made on the above-mentioned issues, we also asked everyone afterward to look after each other, to behave and take part responsibly in the Congress programs. We did our utmost to protect the participants: we ordered 30,000 masks in advance in case things got worse, and we placed hand sanitizer at every entrance and put some in the pilgrims’ bags. 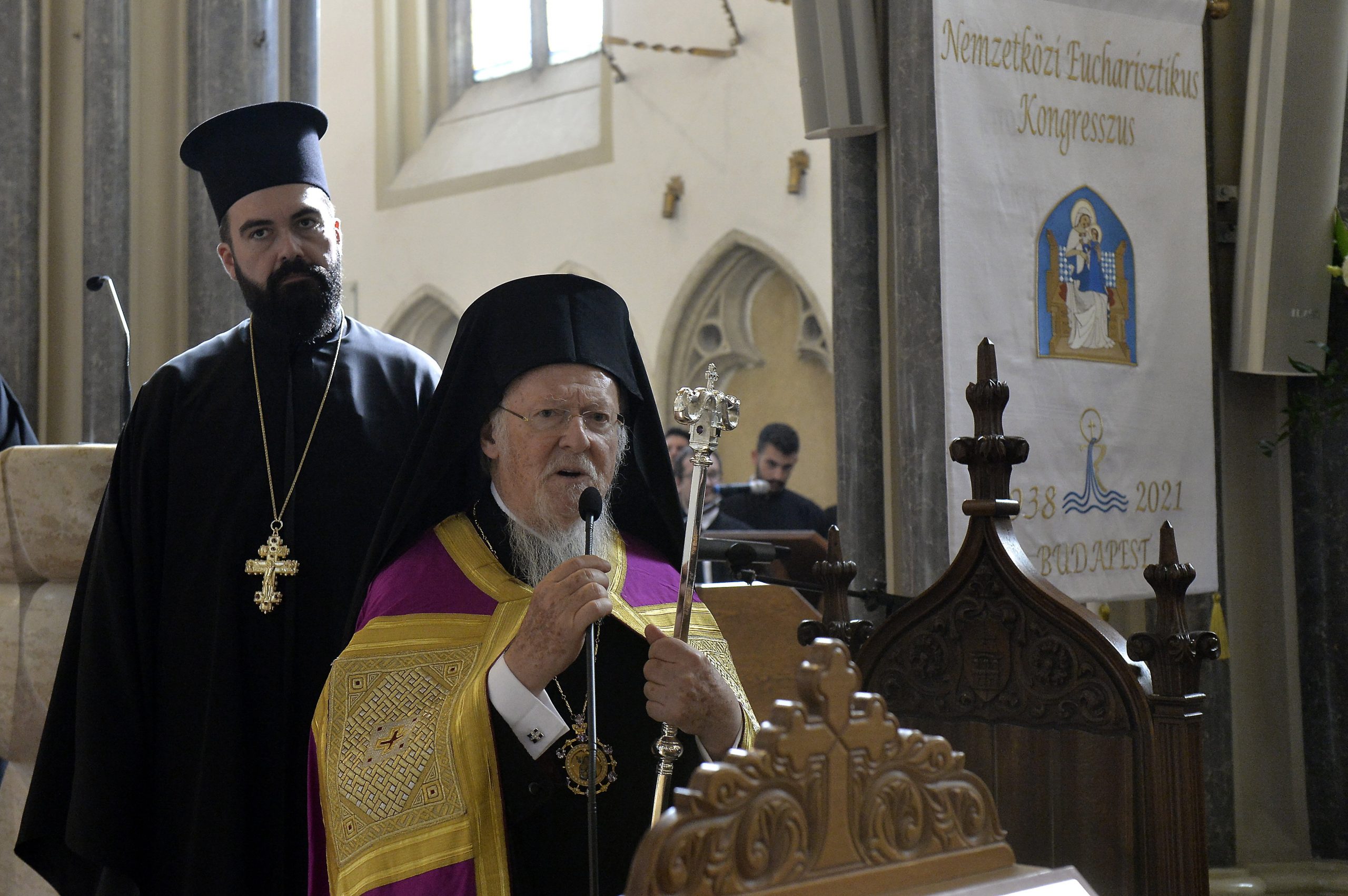 In the speech delivered ahead of a celebration of holy mass during the 52nd International Eucharistic Congress, the patriarch said that the church gathers believers in a "community of love" in the liturgy of the eucharist.Continue reading

The fact that the Holy Father spent only a few hours in Hungary, while at his next stop, in Slovakia, he stayed three days, was seen by many as a subtle but clear diplomatic message to Hungary.  Could this really be the case, or is there a more practical reason for Pope Francis’ travel schedule?

The answer for me is very simple: the Holy Father was accepting an invitation from Cardinal Péter Erdő and President János Áder. This invitation was to the Congress.

On the plane on the way home from Slovakia, the Holy Father mentioned that he would be happy to come back to visit us. This shows me that he was happy to be with us and that he enjoyed himself.”

Does this year’s successful hosting of the event provide any opportunities for the Hungarian Catholic Church?

The Church’s mission given by Christ is the passing on of the faith and the salvation of souls. The Congress itself was a great opportunity to make everyone aware that our homeland is in heaven, where Jesus Christ is the way. He lives among us in the Eucharist, we can meet Him and He can change our lives. So this event has given us another opportunity to save souls, but we must continue.

We have experienced the Kingdom of God in the week of the Congress and we must continue to build it in our daily lives by living alongside justice, peace, and love.”

Before this year’s event, the last Eucharistic Congress held in Hungary was hosted in 1938. Will Hungary have to wait another 80 years for the next one?

Under the present system of congresses, they are held every four years, once in Europe and once on another continent. The next one will be in Ecuador in 2024, and the one after that is expected to be in Europe in 2028. This means that every eight years the old continent will host this world meeting. We could easily have to wait 100 years for the next one, so if those who missed it, should make sure to rewatch the event online. They have this story to tell their grandchildren, just like our ancestors did after ’38. 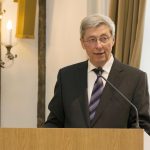 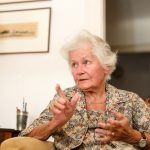