A local representative of the opposition Democratic Coalition was assaulted while collecting signatures for the opposition pre-election, the party said on Saturday.

Gergő Varga, DK’s representative of Budapest’s 11th district, was hit in the face, and will be pressing charges, the party said.

“The Democratic Coalition rejects violence, and the assaulted lawmaker has immediately filed a report with the police. We despair at the hate that has spread in the country under the Orbán government, but we European Hungarians believe this, too, will go to change after the 2022 elections,” DK said in a statement. 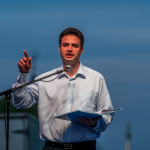