It would be a mistake to underestimate the risk of a persistent rise in inflation, National Bank of Hungary deputy governor Barnabás Virág said on Thursday.

Virág noted that inflation is rife around the world partly due to rapid post-pandemic recoveries.

Addressing an event organised by fund manager Aegon Alapkezelő, he said, however, inflation had already taken root in the world economy well before the pandemic.

Inflation has taken off wherever economic relaunches have been robust, and this is the “price” of effective recovery, he said. But recoveries could be jeopardized were inflation to become onerous, he warned.

The lesson for Hungary’s central bank is that the risk of inflation must be addressed and safeguards put in place in case large central banks narrow their asset purchase programmes, he said.

The central bank's withdrawal from the government bond purchasing program likely surprised the market, resulting in an unexpected firm of the currency.Continue reading 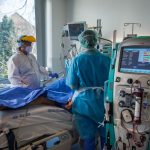