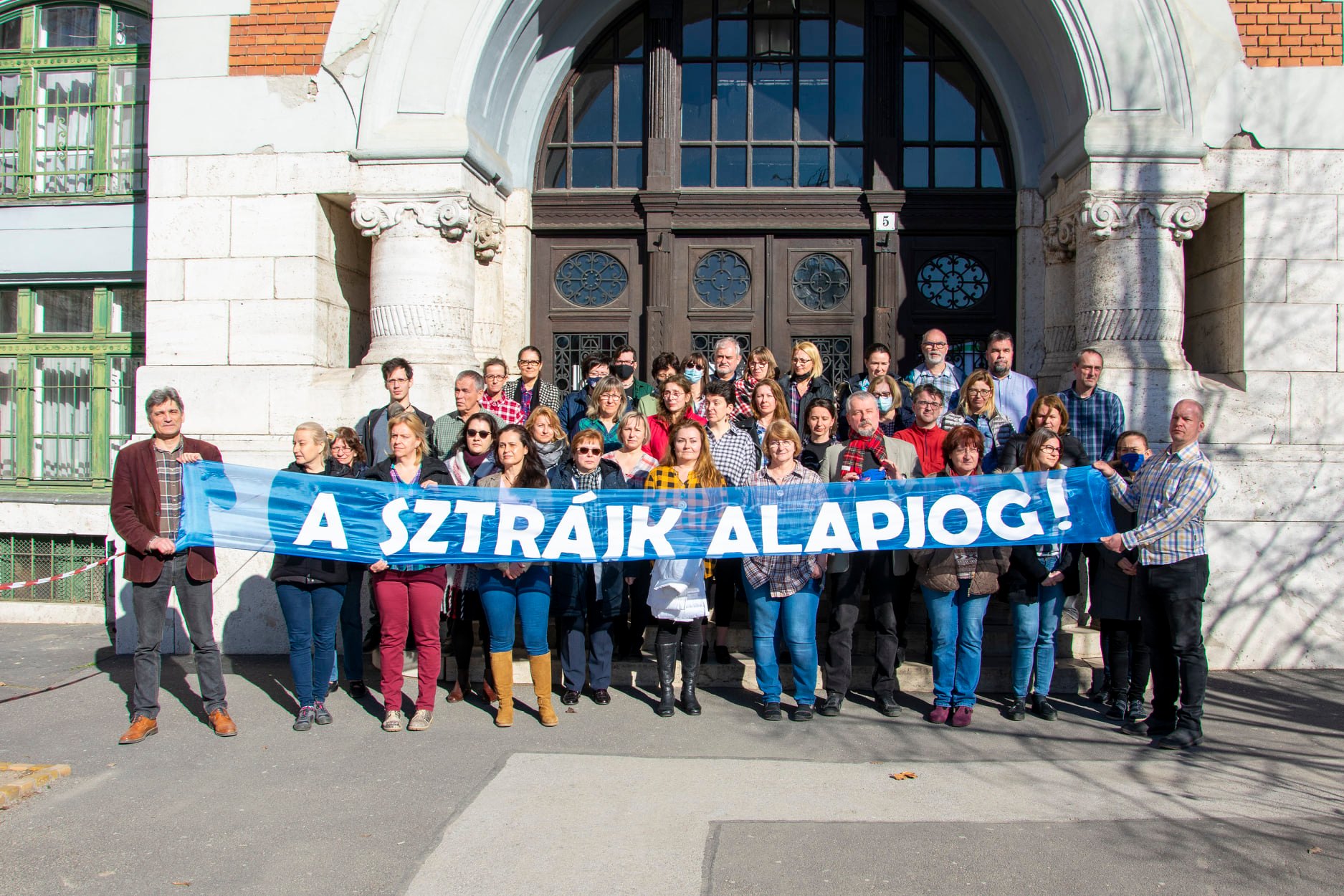 On Tuesday, more schools than ever before joined teachers in their ‘civil disobedience,’ now in its second week, over a government decree adopted on February 11. The decree regulates childcare in schools and kindergartens in response to the emergency caused by the coronavirus epidemic. According to the regulation, children must be supervised between 7 am and 4 pm for schools, until 5 pm for primary schools, and 6 pm for nurseries on working days affected by the strike.

As we have also reported, teachers started practicing “civil disobedience” after they came to the conclusion that striking was made nearly impossible (or rather invisible) by the government’s new mandate. According to the two biggest teachers’ unions, the mandate on the provision of sufficient services for teachers’ strikes is unconstitutional, and they will take the case to an international court if necessary.

One of the conditions of the mandate to let teachers strike legally is that each child or pupil may only be in the same room with peers with whom they were in the same group or class before the strike – meaning that they cannot be temporarily grouped together. The reason given by the government is “to protect against the spread of the epidemic.” However, now one of the organizers of the current display of civil disobedience at the II Rákóczi Ferenc Technical High School of Economics in Budapest, said: “We can’t split up the groups because of a lack of teachers.” They hope there will be no obstacles for a strike in March if it comes to that. 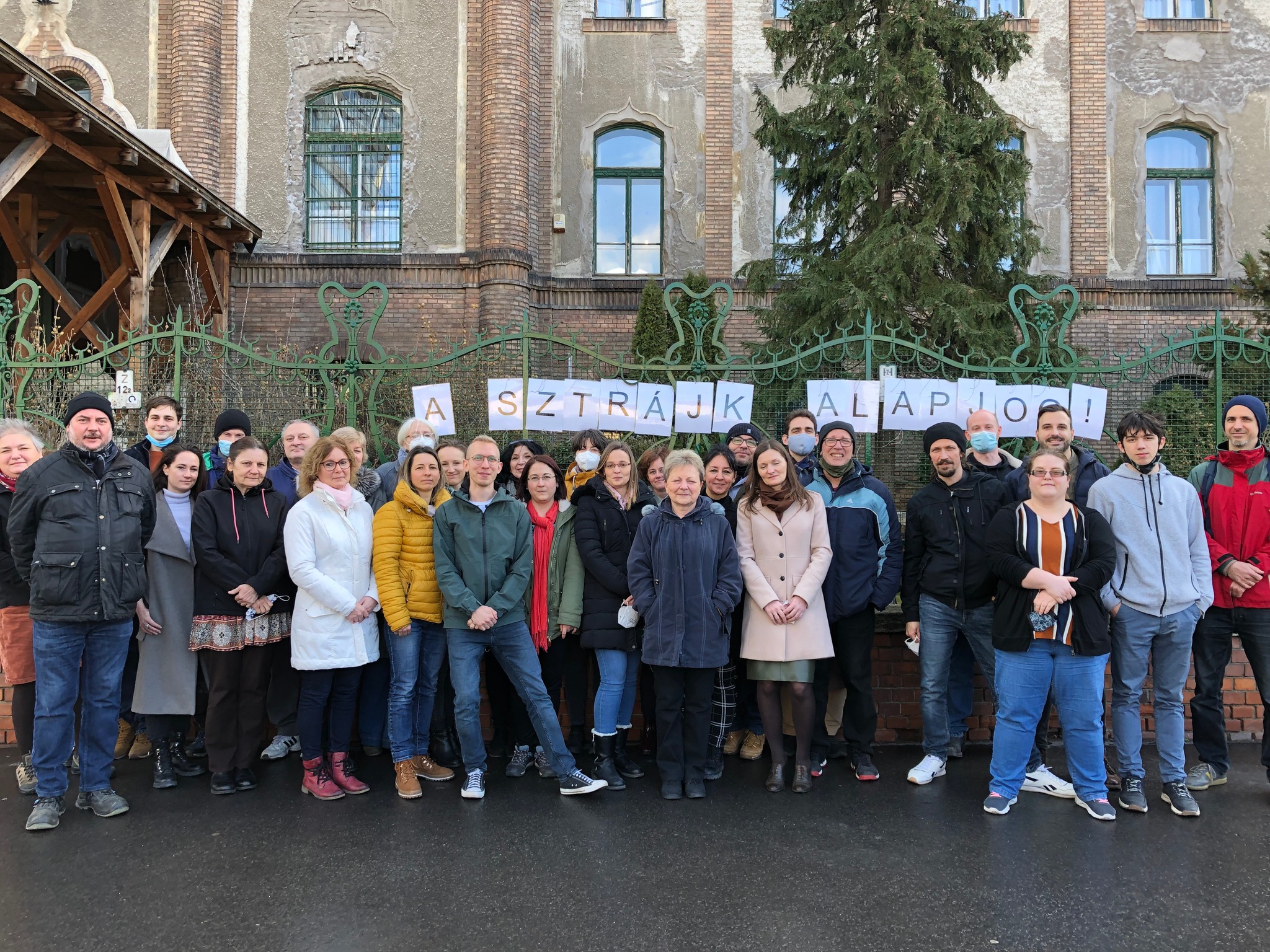 "I'm not so scared of losing my job, because I can go to any Lidl or Aldi and earn three times as much," one of the teachers said.Continue reading

Teachers would also not get paid if they decide to go on strike. 35 teachers from the Herman Ottó High School in Miskolc are taking part in the movement, and they think that:

The government’s decree makes the teachers’ strike not only essentially impossible but also ridiculous, as it would be exhausted by giving up our already humiliating salaries.”

The Herman Ottó High School was the school whose teachers wrote an open letter to the government in 2016, drawing attention to systemic problems in education, and launching a teachers’ movement that turned into protests and teachers’ strikes. They also now write that “We have exhausted every possible legal means of raising awareness to ensure that a radical transformation of public education is achieved as soon as possible. Three weeks ago, we also took part in a two-hour warning strike, one of the demands of which was the settlement of teachers’ salaries, which apart from alleviating our living costs, is one of the conditions for having a supply of teachers, because without teachers there is no education. We believe in democratic solutions, we believe in education for democracy. We, therefore, want to set an example by this action, and we ask everyone to support the aspirations of the teaching profession in the national strategic issue of education.”

More and more schools have joined the movement which started a week ago with the strike of 12 teachers at the Szent László High School in Kőbánya. The first school to do so outside Budapest was also from Miskolc, the Földes Ferenc High School, on Friday.

In addition to secondary schools, ELTE teachers working in higher education also signed a solidarity declaration. More than 250 of them expressed their solidarity with their colleagues teaching in public education. They wrote:

We firmly believe that the civil disobedience of our colleagues also sets an example for future generations to create a successful, autonomous society.”

In addition, student teachers also published a declaration of solidarity with teachers, stating:

With this declaration, we would like to express our solidarity with our future colleagues who have engaged in civil disobedience action in recent days. We support them in exercising their right to organize and take part in a strike, in accordance with their constitutional right.”

Since the new mandate was published, the protestors’ motto is “Strike is a fundamental right!” Student teachers added: “We would also like to make it clear that our solidarity was decided independently. Accordingly, our declaration is not linked to our universities, trade unions, or schools of practice.”

As we have reported before, Gergely Gulyás, who heads the Prime Minister’s office, said the government understood the teachers’ problems and was happy to negotiate with them on the pay raise, but asked them to respect the law. The minister said civil disobedience, which teachers have already started in several schools, was not the right instrument.

Featured image: Teachers stand in front of the Földes Ferenc High School in Miskolc with a banner saying “Strike is a fundamental right!” Photo via the Facebook page of the PDSZ – Democratic Trade Union of Teachers