The Hungarian American Coalition held its annual Mikulás Dinner at the Hungarian Embassy in Washington, D.C on December 2.

Andrea Lauer Rice, President of the Coalition, praised Hungarian-American relations, pointing out that in the areas of security, defense, economic relations, and cultural exchange, the picture is optimistic in terms of cooperation and partnership. “We share much more in common than what divides us,” she said.

Hungarian Ambassador Szabolcs Takács praised the “Coalition’s role as a vibrant, proactive organization in building bridges between Hungary and the United States.”

The evening’s keynote speaker was Ambassador Andrew Bremberg, President of the Victims of Communism Memorial Foundation.

He pointed out that while Europe is facing a geopolitical crisis due to the war in Ukraine, Europe and the West as a whole are “falling into nihilism and losing faith in themselves, their sense of their own goodness, their common values, and the importance of freedom.” 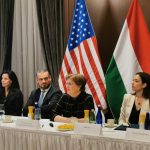