Prime Minister Viktor Orbán is spending his usual summer vacation in Croatia. According to the information from Index, a Hungarian news site, the PM is on the island of Brač where he was spotted in a restaurant.

The staff of Konoba Gajate even posted a picture with Viktor Orbán, adding that it was an honor for them to host him.

However, as it turned out, the PM’s vacation does not seem to be going totally smoothly. Slobodna Dalmacija, a Croatian newspaper, reported on Monday that the Hungarian Prime Minister’s boat broke down not far from Vis. Eventually, Viktor Orbán, his wife, and one of his bodyguards were rescued by Boris Vrkić, a former colleague of the newspaper.

According to the journalist, he recommended a restaurant to the Prime Minister, where the staff had no idea who he was – they only found about the prestigious guest they had after he left but it left them surprised. 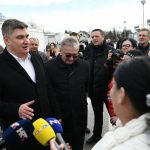