Holy Week, which begins with Palm Sunday, is the week of preparation for redemption through the suffering, death, and resurrection of the Lord Jesus Christ. Today is Good Friday. It is the second and saddest day of the Three Holy Days (Latin Sacrum Triduum Pascale). On this day the Christian churches commemorate the suffering and death of Christ. On Good Friday there is no Holy Mass, the altar is empty. The color of the service is red. In Hungary, Good Friday has been a public holiday since 2017. Numerous folk customs with Christian roots are also associated with this day.

The service (important to emphasize: not a holy mass, because on this day, according to Christian tradition, Jesus, the eternal High Priest himself represents the sacrifice = God’s Lamb) consists of three main parts on Good Friday.

Then comes the highlight of the service: the homage to the Holy Cross. Originally, Christians in Jerusalem venerated the real cross (on which the Lord suffered and died). Moreover, this day is a strict fasting day for Catholic followers.

The transformation of the hosts is completely absent. At communion, the hosts transformed on Holy Thursday are given. There is no celebration of the Eucharist in the classical sense, on the basis of which we call the service the Mass of the Presanctified, in Latin: missa praesanctificatorum or missa sicca.

Related article
Easter Sunday in 2021 Not Without Hope 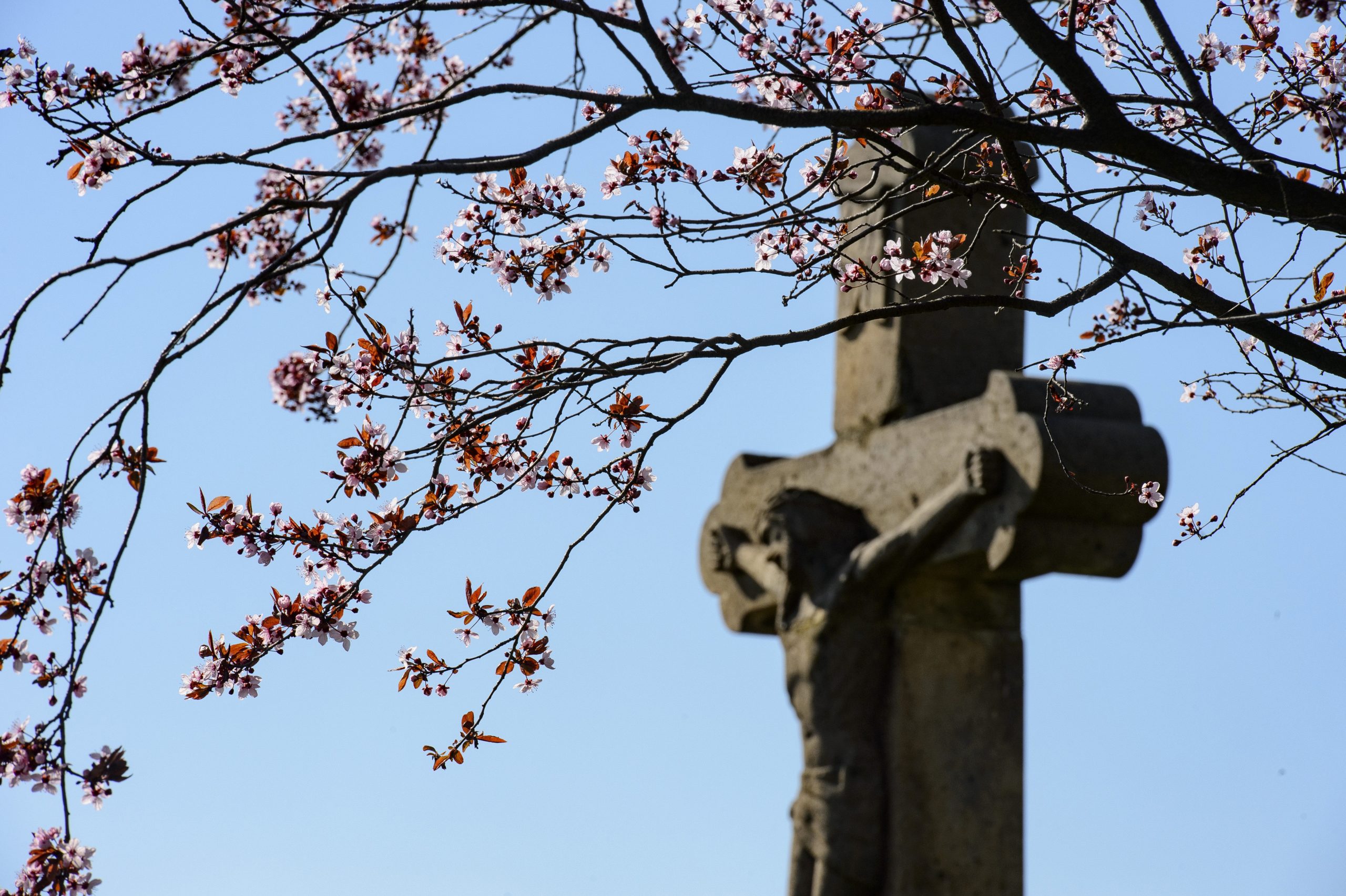 As a child, I was fascinated by Christmas but never really liked the feast of Easter. I did not fully understand it either. I was raised in a Catholic family, so I knew that Easter “ranked higher” in terms of significance. Still, Christmas was more heartwarming to me, while Easter related to an epic drama […]Continue reading

Among the oldest “celebratory elements” of the service on this day are the omission of the opening rites (priest enters without greeting the congregation and begins the Mass “in medias res”), the singing or reading of the Passion Narrative (Passion of the Lord) according to John, the use of wooden rattles instead of bells and altar bells, the Great Intercessions, and the absence of music (organ, at most singing is allowed).

The structure of the liturgy in the Lutheran congregations is similar to Good Friday. However, there are some differences, such as the liturgical color: for the Lutherans, it is black, in some cases purple. Also, flower decorations and candles are not common, as they are for Catholics. The celebration centers on the Passion story, which is celebrated through sermons, prayers, and songs. Here the liturgy, the sermon, plays a more important role than communion, which theologically has a very different meaning and emphasis than in the Catholic Church.

Another important element of the Protestant ceremony is church music in the form of Passion chorales such as “O Haupt voll Blut und Wunden.” The Passion music later developed into an independent genre: the Passion oratorio. The most famous Passion oratorios were written by J.S. Bach, who was also a Lutheran himself and musically contributed a great deal to the development of Protestant church music. 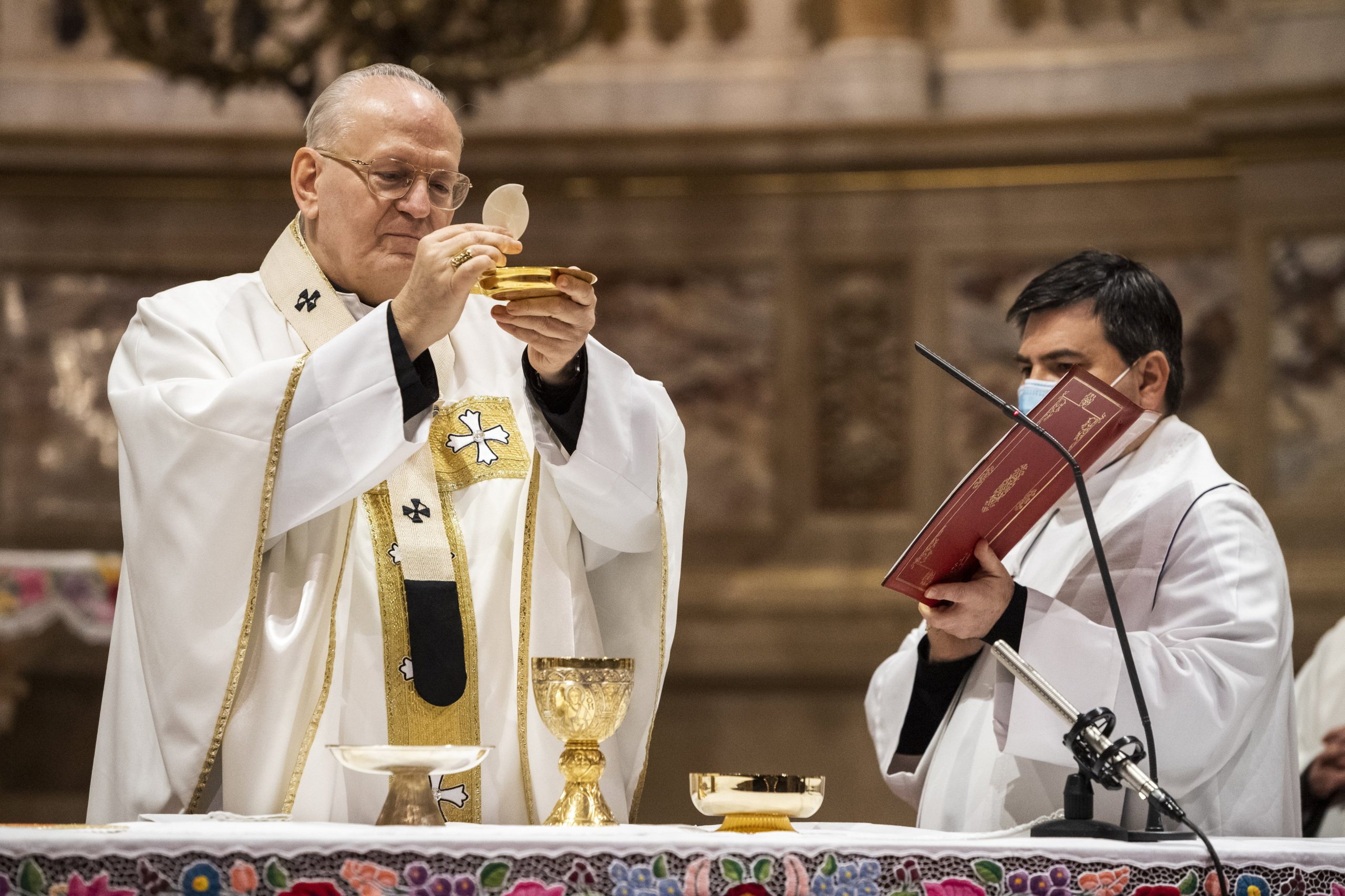 God “faithfully loves man, especially in troubled times,” Cardinal Péter Erdő, the head of the Hungarian Catholic Church, told MTI on Saturday, celebrating Easter. The cardinal said Jesus “thanked his Father while preparing for torture and death” at the Last Supper. “It is important that we are able to express our gratitude to God who […]Continue reading

The celebration of Good Friday in the Eastern Orthodox and Catholic Churches (Byzantine and Slavic) begins on Thursday evening with the morning service (Orthros/Utrenja). This service is characterized by twelve readings from the Gospels. During the service, the Passion texts from the four Gospels are sung.

Today hangs on the wood that hung the earth above the waters.
With a wreath of thorns is wrapped the king of angels.
False is covered with purple, who covers the sky with clouds.
Blows received he who in the Jordan freed Adam.
With nails was fastened the bridegroom of the church.
With a lance was pierced the Son of the Virgin.
We venerate your sufferings, Christ.
Show us also your glorious resurrection!”

The following services, celebrated already on Friday morning, are the “royal hours.” During these, in the Greek tradition, the crucifixus is removed from the cross and wrapped in a white cloth. During Vespers, there is a solemn exposition of the burial shroud of Christ (=epitaphios or plashchanica). On Good Friday there is also no Eucharist celebrated, as in the Catholic Church. This day is a strict fasting day in the Orthodox churches.

Good Friday was declared a public holiday in Hungary in 2017.

In Hungary, there are also many folk customs connected with Good Friday. The first traces of the festival date back to the 4th and 5th centuries. Its rituals were established as early as the 8th and 9th centuries; they also emphasize the veneration and worship of mourning and the cross. Although it was not considered a feast day in the early church because it was a fast day, it became associated with numerous pre-Christian images, beliefs, and customs related to the beginning of spring throughout the centuries of Christianity. Until recent decades, the best known of these was bathing at dawn: around 2 to 3 a.m., young people would go to the stream to wash themselves. In some places, the animals were watered from the stream, in others the horses were bathed in the river. This symbolized purification. It was a widespread belief that the one who washes himself in the river water will become healthy and not sick, will not have eye pain, and will become nimble at work. Girls were expected to wash to be beautiful and not to get freckles. 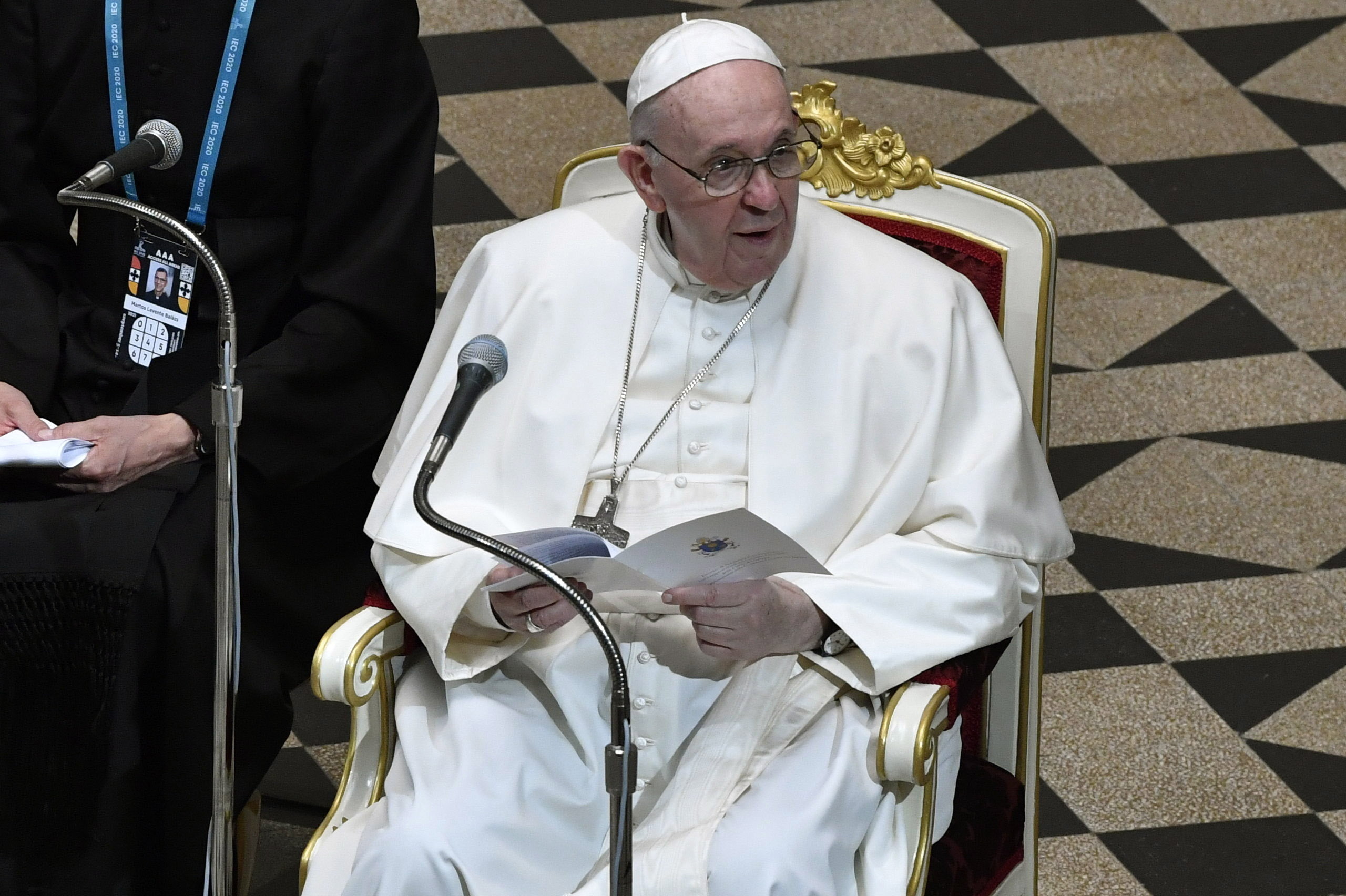 Czerny heads the Vatican department for promoting integral human development, founded by Pope Francis in 2016, tasked with responsibilities regarding migrants and victims of armed conflict among other marginalised groups.Continue reading

In the Christian Middle Ages, bonfires were lit on Good Friday to commemorate the dawn when Jesus was brought before Pilate and the servants and soldiers lit a fire and warmed themselves by it.

In Felsőpetény, before the First World War, a fire was lit next to the church on the evening of Good Friday in memory of the vigil by the fire when Jesus’ tomb was guarded. In some places, the custom of “burning Pilate” was practiced on this day. The custom consisted of beating and burning a straw or cloth doll representing Pilate (who, according to the Gospel, had Jesus crucified). In some cases, Judas was also symbolized with such a doll.

Featured image: Pope Francis at the Good Friday Service of the Way of the Cross in St. Peter’s Square in Vatican City, almost empty due to the coronavirus epidemic, on the evening of April 2, 2021. Photo by Angelo Carconi/MTI/EPA/ANSA pool 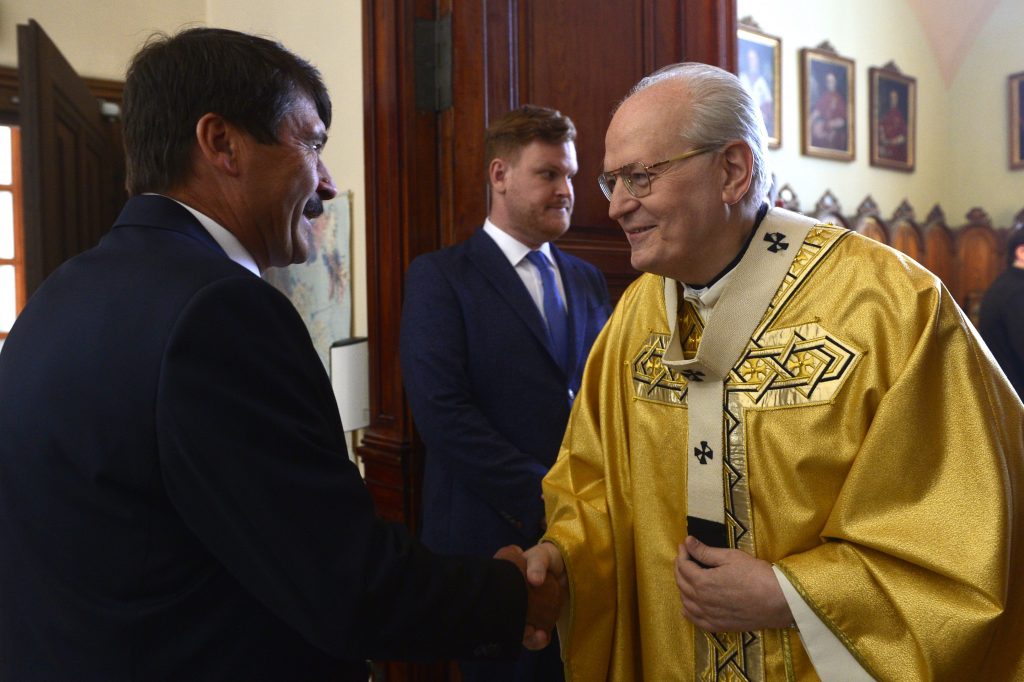 Cardinal Péter Erdő, who has led the Esztergom-Budapest Archdiocese for 20 years, was greeted with a mass in the Esztergom Basilica on Wednesday on the occasion of his 70th birthday, with participation by László Kövér, President of the Hungarian Parliament, Zsolt Semjén, Deputy Prime Minister, and members of the Hungarian Catholic Bishops’ Conference (MKPK). In […]
MTI-Hungary Today 2022.06.23. 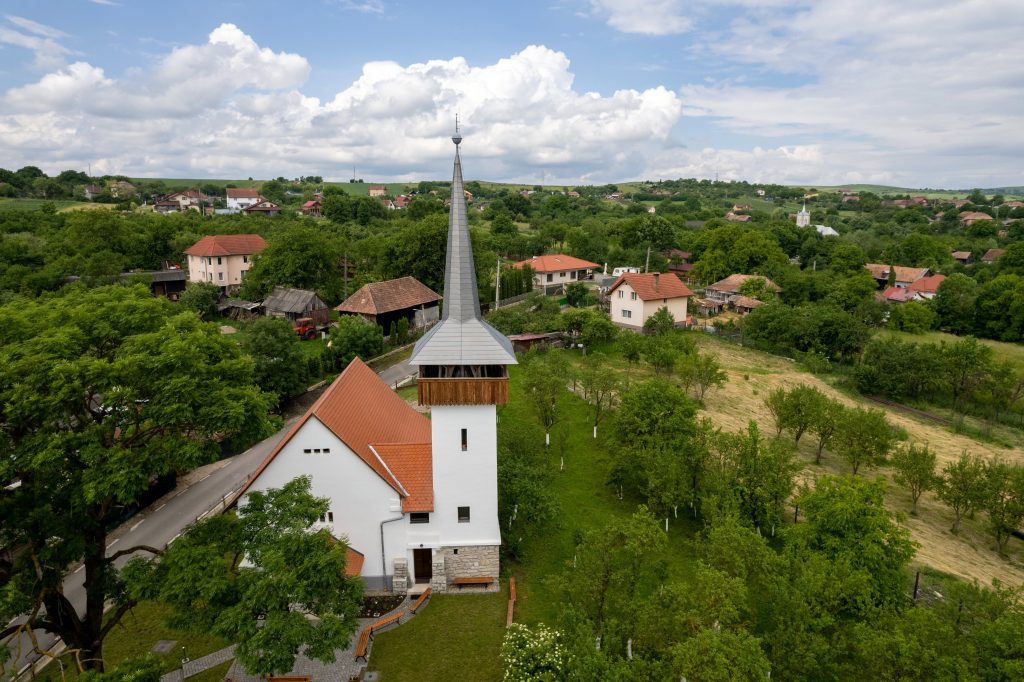 Christian communities are some of the greatest beneficiaries of the Hungarian tax-return policy. Online tax returns have become the most popular option, with almost 1.3 million people donating their 1% of tax to churches and NGOs this year online, the Finance Ministry’s Parliamentary State Secretary András Tállai told wire service MTI. Under Hungary’s tax laws, […]
Hungary Today 2022.06.21.