The government’s fresh political advertisement campaign applies emojis in order to call on people to fill out the newest ‘National Consultation’ survey. This simplified method has naturally generated waves domestically.

Following a short question, an emoji hints at what perhaps the government wants to see in reaction. Since it is targeted to advertise the survey, most billboards deal with taxation (such as raising the minimum wage), George Soros, Brussels and the EU, migration, and “sexual propaganda.”

Raising the minimum wage is followed with a smiley face, for example, unlike the question related to George Soros, which is accompanied by the steaming nose emoji. The EU-related question is illustrated with the swearing one and, illegal immigration is accompanied by the exploding head emoji. Despite apparently targeting young people, the questions are still written formally. 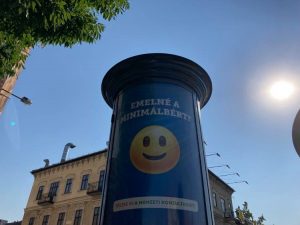 “Would you raise the minimum wage?”

The advertisements were first detected on Wednesday morning, immediately providing a topic for the PMO Head’s regular press briefing. Gergely Gulyás argued that a good advertisement attracts attention and “I’m glad it apparently succeeded (to do so).” In response to a question about the childishness of this method, the minister insisted they consider Hungarian citizens as adults, and it was up to everyone to decide what they support. 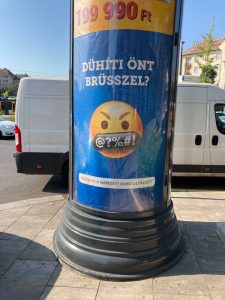 “Does Brussels make you angry?”

The government began to post the latest edition of National Consultation surveys on July 1st. The poll includes 14 questions in total: besides family support, taxation, and Hungary’s vaccine factory, migration, George Soros, and the EU are also featured, similar to earlier editions of the survey. While Fidesz-led administrations regularly choose this method, it is also a matter of criticism due to leading questions reflecting the government’s political agenda, high costs, and lack of transparency.

featured image: “Are you outraged by illegal immigration?”; photos by Hungary Today