PMO Head Gulyás: ‘Fidesz is still the only hope for Hungary’ 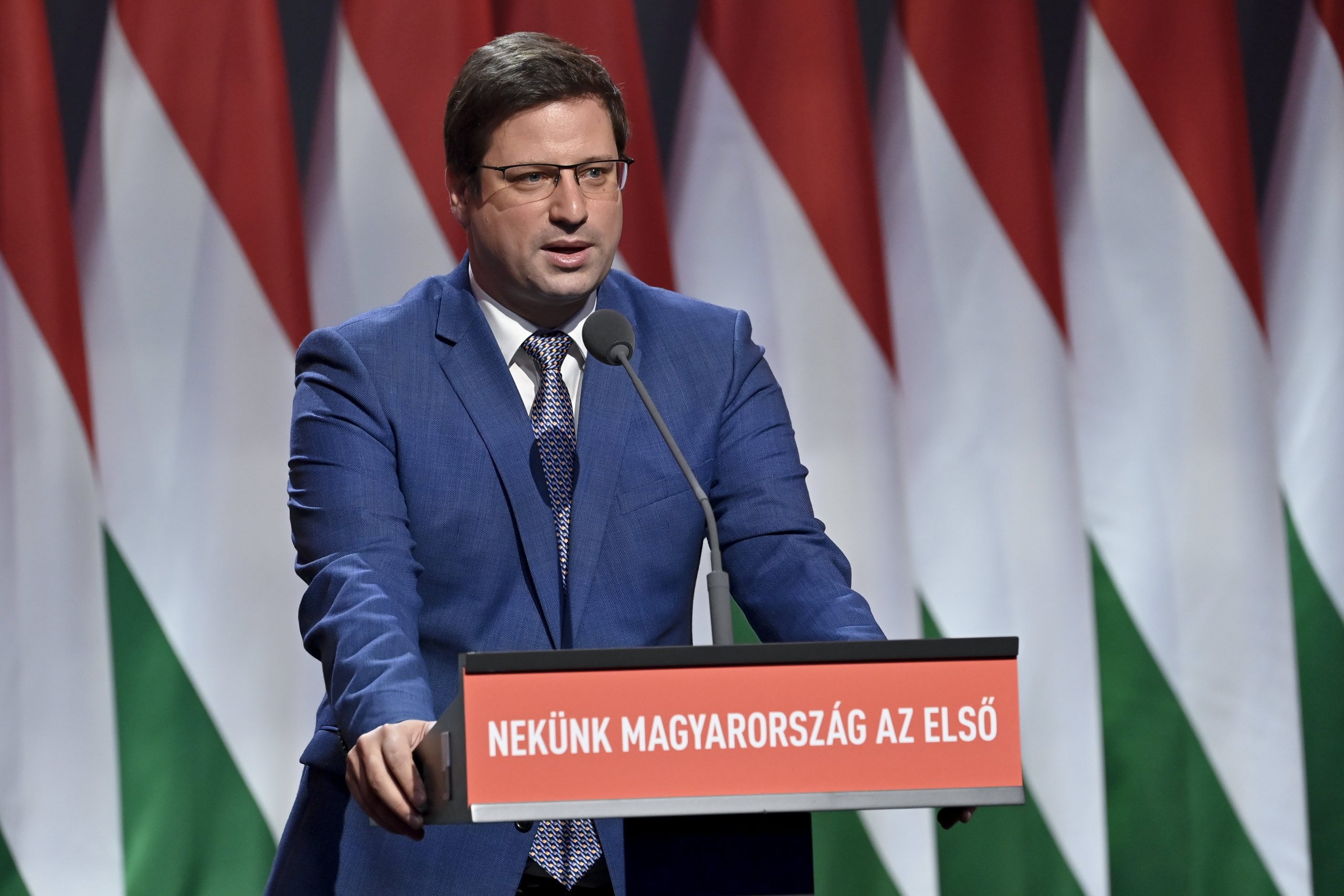 Standing on the bulwark of Europe, we will win for the fourth time in 2022, Speaker of Parliament László Kövér said in his speech at the 29th congress of ruling Fidesz in Budapest on Sunday.

“The lords of East and West are again playing their dirty games at our expense, in which we are once again destined to play the role of virtual cannon fodder”, he said. If we cannot organize central Europe into a political factor worthy of its growing economic power and population, we deserve to have history repeated with us, Kövér said.

Related article
Orbán Re-Elected as Fidesz Leader: "As long as I can I will carry on doing it" 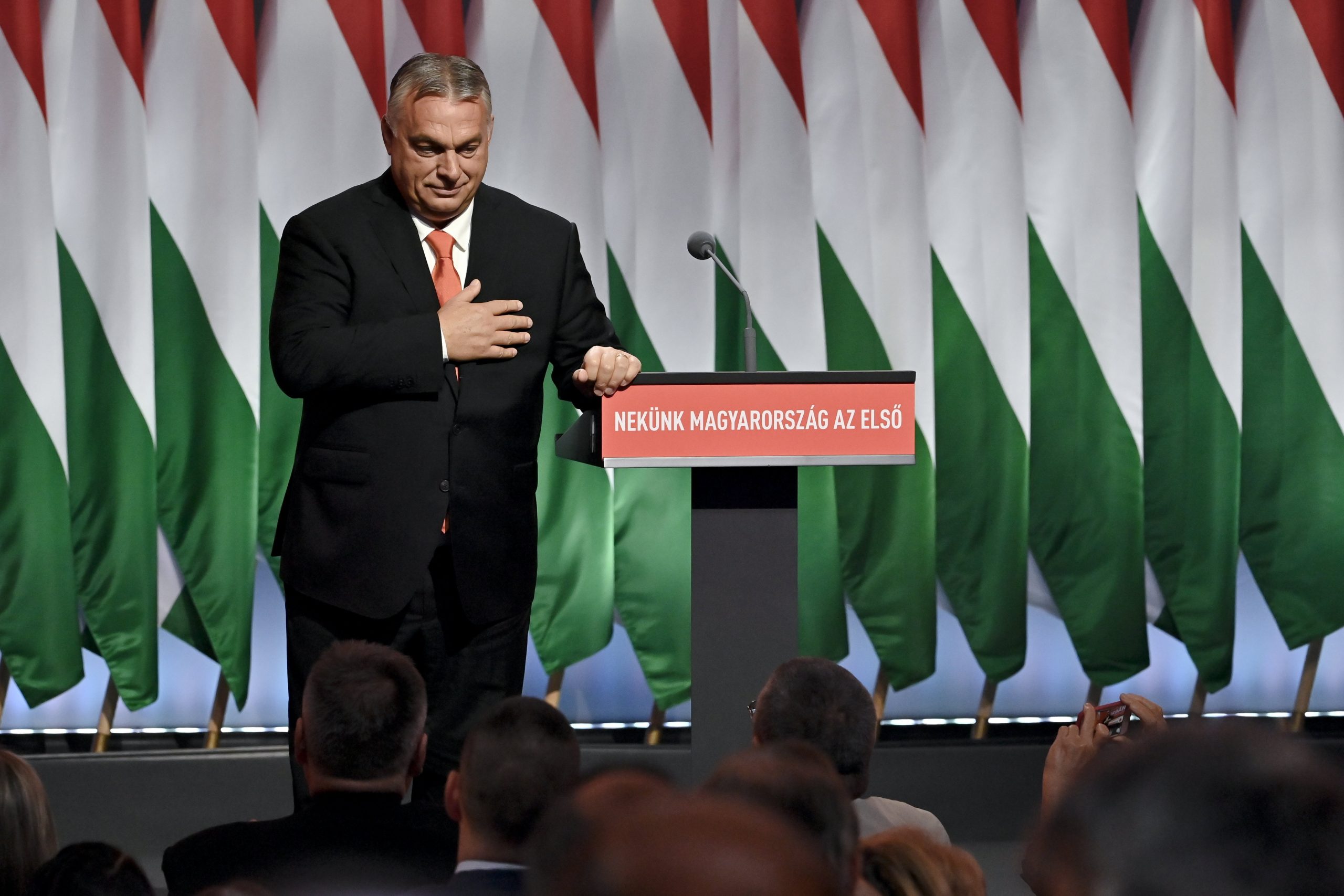 "I see the first 33 years, everything that has happened so far, as a warm-up. A lot has been achieved, but I feel it was just the beginning, just preparation for the really big things that are yet to come." Orbán said.Continue reading

Addressing the congress, Zsolt Semjén, the leader of the co-ruling Christian Democrats (KDNP), said that “the Fidesz-KDNP alliance is a political community, the most successful one in the European Union and in the history of Hungarian politics. The essence of Fidesz-KDNP is that it is not only an alliance, but a real community, one that has won every parliamentary election with an absolute majority since 2008. And this is not going to be different this time,” Semjén said, referring to the next parliamentary election in spring 2022. “Our goal, the reason why we are doing all this is to protect Christian civilization against an invasion of migrants and the LGBTQ craze, as well as to protect our national sovereignty,” he said.

Kinga Gál, an MEP of Fidesz, who was elected a vice president of the party, said that a major difference of opinion in Europe was the way the issue of demography is addressed. “A certain part of the continent wants to resolve the problem with migration,” she said, adding, however, that Fidesz’s position is that a different composition of the population in Europe would change Europe’s identity. “We must avoid that,” Gál said, adding that “the future of Hungary, and the whole of Europe, is in families”.

Related article
Fidesz MEP Gál: We Are at a Key Moment in the Era of the Gigantic Duel Between Good and Evil

"In Europe, certain forces want to undermine sovereignty, national self-esteem, and the family as the forces that keep the individual alive with a great final attack," said Fidesz MEP Kinga Gál on the second day of the VII Friends of Hungary Conference.Continue reading

Judit Varga, the justice minister, told the congress that “It was worth taking on the conflicts with the bureaucrats in Brussels and represent the interests of Hungarians despite all the difficulties, because with our persistent policies we can slowly change the whole of Europe”. “We have been proven right. The Hungarian people have been proven right on the really important issues,” she said. Varga said the government was right not to support the banks during the financial crisis but the people, it was right on public utility price cuts and on stopping illegal migration, and many countries are now following the Hungarian model.

Hungary, along with its allies, stands up for the sovereignty of nation states because “we believe that everyone should put their own homeland and the interests of their own people first”, the minister said.

Next year’s general election will be crucial, Gergely Gulyás, the Prime Minister’s chief of staff said, adding that next spring, “we will be choosing a future, we can decide between present and past.”

“After the left, led by Ferenc Gyurcsány, ruined the country in 2010, they set themselves two goals,” Gulyás said. “They needed to get rid of the legacy of the former prime minister and quarantine Jobbik, which they called a Nazi party”. “More than a decade later, the left, led by Ferenc Gyurcsány, is fighting for power with Jobbik in their ranks,” he said.

While the left took the 13th-month pension away from pensioners, Fidesz is working to give it back to them. Today, the minimum wage is higher than the average wage was under the Gyurcsány era, Gulyás said. He said the previous government had indebted and bankrupted the country while the current cabinet has cut taxes and managed to substantially reduce the country’s debt by the start of the coronavirus pandemic. Gulyás contrasted the 7 percent contraction of the economy in 2009 with this year’s 7 percent economic growth, pointing out that the left doubled the price of electricity and tripled the price of gas over eight years, while the incumbent government reduced utility prices by 20 percent over the past decade. He noted that the government had granted citizenship to more than one million Hungarians who are part of a unified Hungarian nation.

The ten years before the outbreak of the pandemic was the most successful decade in the past century, and Fidesz is still the only hope for Hungary at the moment, Gulyás said.

Related article
Orbán at Fidesz Congress: 'We will go through the thickest wall and win again" 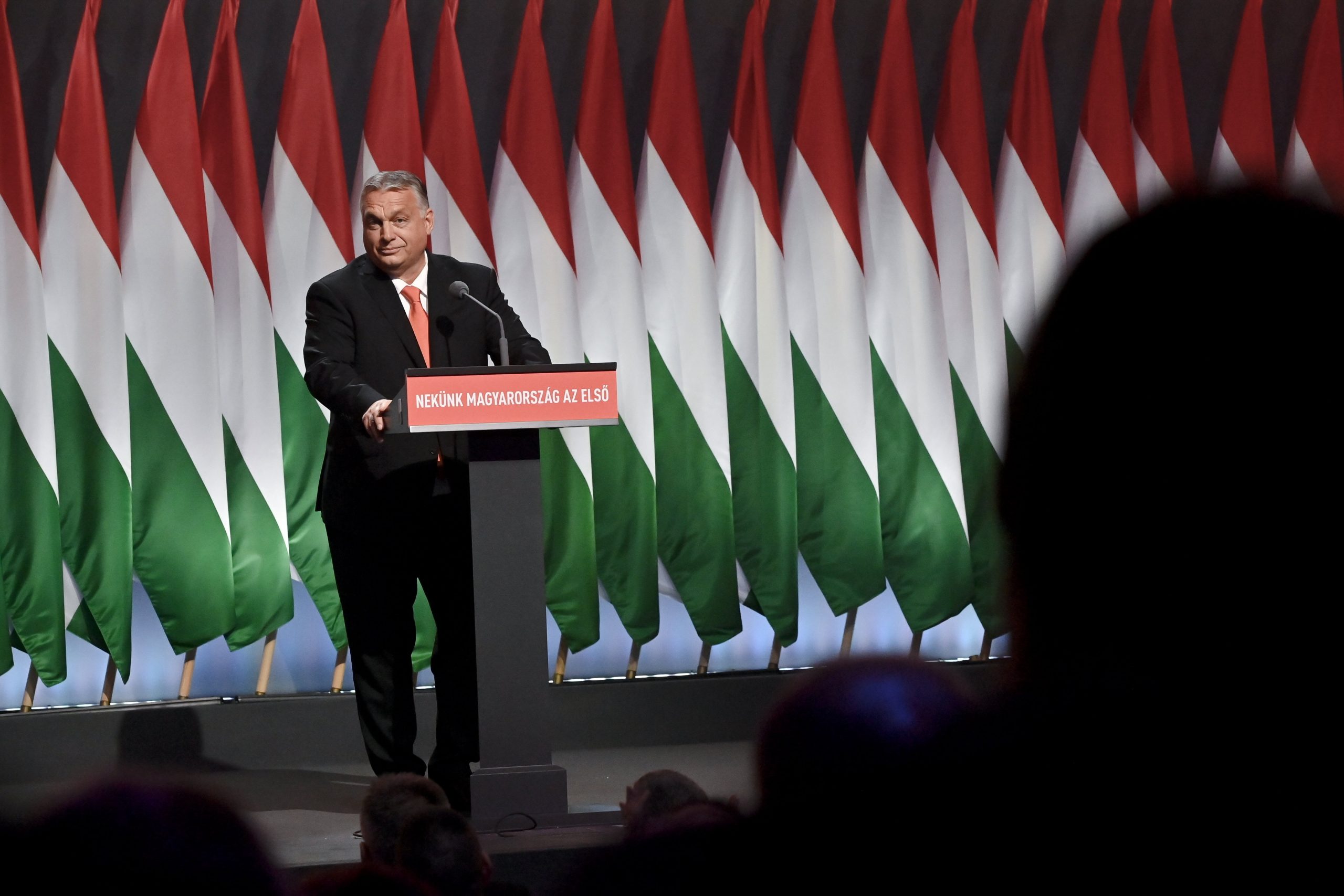 If Fidesz-KDNP can continue to govern, Hungary can make huge progress again in the next ten years and move up to join the group of developed countries, PM Orbán said at the ruling Fidesz party's 29th congress.Continue reading

The migration policy of Brussels and the Hungarian political left is clearly aimed at overstepping the concept of nation states and Christian faith, replacing Europe’s population, and implementing the Soros plan, Péter Szijjártó said.

The task is to fight against these policy objectives over the next couple of months leading up to the general election next spring, the stake of which is clear, Szijjártó said.

Six years ago Hungary faced an invasion of 400,000 illegal migrants who crossing its southern border “marched through” the country’s territory without “showing any basic respect for us, for our laws, regulations, and culture”, he said, noting that Hungary had been protecting Hungary, the Hungarian people and the whole of Europe ever since. Hungary insists on carrying out duties in line with European laws, just as much as “we insist on our right to decide whom we want to allow to enter our country’s territory and with whom we want to live together in our own country”, he said. Szijjártó said that the Hungarian government will continue to make every effort against Brussels’ mandatory migrant resettlement quota scheme, calling it “probably the most outstanding achievement” of the Visegrad Group (V4) that it had blocked the introduction of the regime.

Speaking about the migration policy of the Hungarian left, Szijjártó said their actions had clearly shown over the past six years that “they want to dismantle the border fence and let migrants in”. He said that their “current candidate” for the post of prime minister has “spoken at length against the government’s migration policy in his recent videos”, making reference to Péter Márki-Zay, the opposition’s joint prime ministerial candidate for next spring’s general election. “This is why it will be at stake in 2022 whether Hungary will continue to be a Hungarian country or will become a country of migrants,” he said. The foreign minister said Europe is facing unprecedented migration pressure both from the south and the east. “Now our Polish brothers are making heroic efforts to protect their country’s borders. We say thank you to them for protecting us, for protecting Europe,” Szijjártó said.

Brussels and the Hungarian left want to take our freedom but the allied ruling Fidesz and Christian Democrats (KDNP) will defend it, Fidesz MEP Tamás Deutsch said.

“Brussels is abusing its power and waging a cold civil war against Poland and Hungary. They are putting on a full-court press to take our freedom,” he said. “In the 21st century, there are still those who think they can take it, those who want to tell us how we should live”, Deutsch said.

“They would destroy everything that our freedom is based on: the cohesion of our families, the traditional form of marriage and raising children, our debating communities based on free-thinking, our churches, and finally our national sovereignty,” he said.

He said that Fidesz-KDNP will defend the country’s freedom both in Brussels and Budapest. They will defend the freedom of Hungarians to decide on utility prices and will stand up for the development funding that Hungary is entitled to. Fidesz-KDNP will continue to say no to immigration, he said, adding that “Brussels wants to force a migrant resettlement quota on us”. Brussels and the Hungarian left also want to take the right of Hungarian parents to decide how to raise their children but Fidesz-KDNP “will say no to aggressive LGBTQI+ sexual propaganda threatening our children”, said Deutsch.

Addressing the congress, Marek Kuczynski, of Poland’s ruling Law and Justice (PiS) highlighted the importance of Polish-Hungarian friendship, noting that freedom and sovereignty were basic values for the two countries.

“The sovereignty of our nations is under attack from both East and West, with the EU trying to force a superstate model on them. Thanks to Hungarian-Polish cooperation and the cooperation of the four Visegrad Group countries – the Czech Republic, Hungary, Poland and Slovakia -, central Europe will remain strong, so they must continue to work together,” he said.