Disability advocacy organizations are protesting against Péter Márki-Zay’s “unacceptable” comments he made on Sunday, after the united opposition’s frontrunner called governing “Fidesz propagandists” “handicapped,” although right afterward he tried to clarify his words.

The united opposition’s candidate for prime minister, Péter Márki-Zay’s words, have yet again proved controversial as he used the term “handicapped” in a pejorative sense in his new Facebook video.

“Excuse me, but if those poor Fidesz propagandists are so handicapped – and handicapped is not a good word because we like handicapped people, while I have a great resentment of the lying Fidesz propagandists; obviously their mental capabilities are probably not – I’m not saying they’re perfect – but it’s certainly not their mental capabilities that there’s a problem with. Extremely vile wickedness, that is what characterizes this company of thieves,” the opposition prime ministerial candidate said.

A pro-government commentator lambasts opposition frontrunner Márki-Zay for saying that elderly Fidesz voters have been decimated by the pandemic. A left-wing columnist accuses the pro-government media of deliberately defaming Márki-Zay.Continue reading

In reaction to the politician’s comment, the National Association of the Deaf and Hard of Hearing issued a statement on Monday.

“Our organizations of people with autism, people with reduced mobility, people who are deaf or hard of hearing, people who are deaf-blind, and people with psychosocial intellectual disabilities have been fighting for a long time to remove pejorative terms from public discourse that are offensive to all of them. The word ‘handicapped’, when used in a context where it is used as a negative sign towards another person, whether able-bodied or disabled, is particularly offensive,” the advocacy group said.

“We believe it is important for public figures to set an example for society,” the organization added.

“We expect zero tolerance, such an act cannot be relativized, it cannot be treated as a mere slip of the tongue, a hasty statement,” the group stressed, adding that the use of pejorative terms have no place in public discourse.

The statement called on all public figures, politicians, and opinion leaders to always refrain from making such statements, regardless of party affiliation.

The association, together with several other disability advocacy organizations called on Péter Márki-Zay to immediately apologize publicly to the community he had offended- those with disabilities. 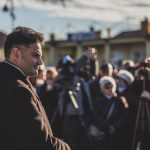