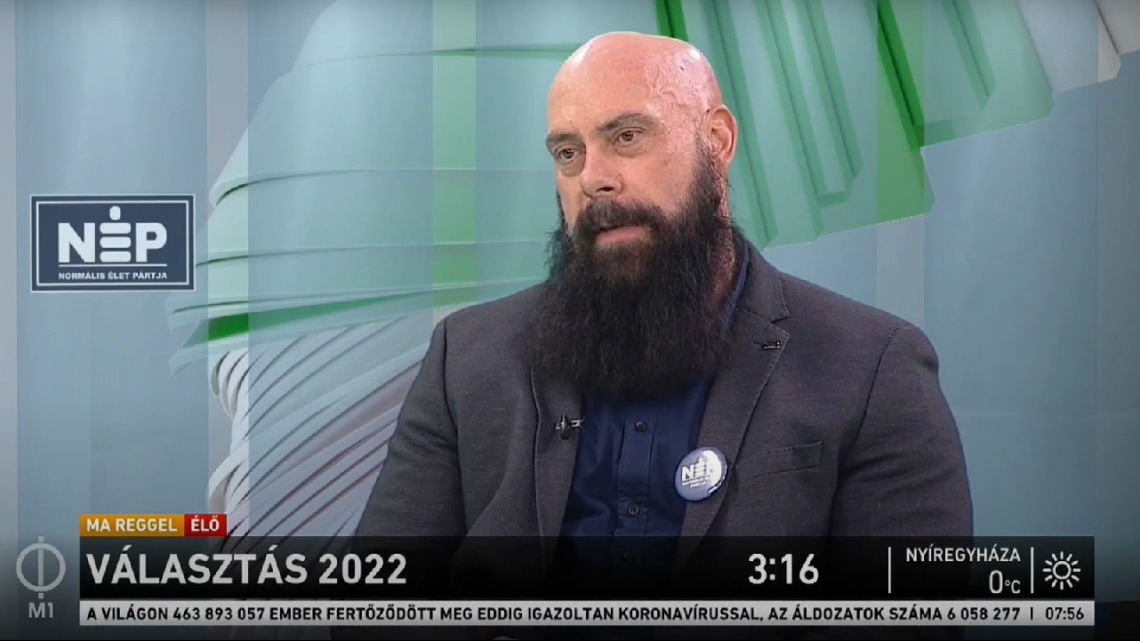 Bodybuilder, pharmacist, and Covid skeptic György Gődény was also given five minutes in the state media ahead of the upcoming parliamentary elections to present his newly formed party and its election program. In the past years, Gődény has become perhaps Hungary’s most notorious Covid skeptic, who has been sharing his questionable views on the coronavirus on various social media platforms.

The Party for Normal Life (Normális Élet Pártja) wants a normal life, the party’s leader said, adding that his party represents “ordinary people,” because Hungarian society is based on them and they are the ones who build the country, yet they are exploited. (In Hungarian, the abbreviation for the name of Gődény’s party is NÉP, which means ‘people’).

Former pharmacist turned bodybuilder, lifestyle consultant, and vlogger, György Gődény, is perhaps Hungary’s most notorius Covid skeptic. He has been sharing his views about the coronavirus on Youtube and several social media platforms. His Facebook page was even banned for misinformation he was spreading on the platform.

“Let us live in peace, a normal life where we have the opportunity to have normal housing, for young people to have access to housing without going into debt for the rest of their lives, where we get the wages we work for and a large part of that is not taken away,” Gődény outlined his party’s “program,” and believes it is important to elect people to parliament who know how “ordinary people” live.

The party has also recently called on Hungarian citizens for acts of disobedience in response to the government's recent decision that gives employers the right to make vaccination compulsory for their employees.Continue reading

Gődény then recited Ferenc Kölcsey’s famous poem, “Huszt,” and said that the future will not come from brooding over the past or reminiscing about glory days, but from knowing where we are and where we want to get to.

According to him, Western-style democracy is being eroded globally, while more and more governments are using dictatorial and tyrannical means that the Party for a Normal Life finds unacceptable.

For three weeks from Wednesday, in the order in which they appear on the ballot papers, public media will give national parties and party alliances the opportunity to present the main ideas of their election program in a live five-minute segment. Each party or party alliance with a national list gets five minutes, regardless of the extent of their electoral support.

György Gődény announced last November that he will be running for Hungary’s 2022 parliamentary election with his party, ‘Party for Normal Life.’  The party was registered back in the summer of 2020, and according to Gődény, it was very difficult to find candidates for all 106 of Hungary’s constituencies.

Meanwhile, criminal proceedings are currently underway against his formerly founded party for still not repaying state support granted to its 2018 campaign. Gődény was also the founder and president of the party Common Denominator (Közös Nevező) in 2018. The political organization is widely regarded to have been a fake party only established for business purposes. It received just under four thousand votes during the 2018 general elections, which was less than the number of recommendations the party managed to garner. Numerous criminal investigations have been launched against the organization and the party was ordered to repay the HUF 153 million campaign support it received, which Gődény’s party has not done to date.

The support for Gődény’s party is almost immeasurable according to opinion polls. And their chances have dwindled with the recent removal of virtually all restrictions by the government.