The Hungarian National Bank (Magyar Nemzeti Bank, MNB) is significantly tightening monetary liquidity, announced Vice President Barnabás Virág. He said that the peak of the inflation trajectory is not yet in sight, so the tightening will continue in the coming months.

MNB still considers it important to avoid second-round effects, which is why the base rate was raised to 11.75 percent, reported Világgazdaság, a Hungarian economic website. The bank’s vice-president also said that the Russian-Ukrainian war and the resulting price boom are generally increasing the risk of recession in the global economy.

This could be particularly pronounced in Europe where the drought is also exacerbating the situation, but there could be a change in the external inflation environment from 2023.

The Hungarian economy has seen strong growth in the second quarter, a sign that there is considerable strength in the economy.

However, economic activity has been slowing since June, and Barnabas Virág warns that inflation will remain on an upward path in the autumn months. 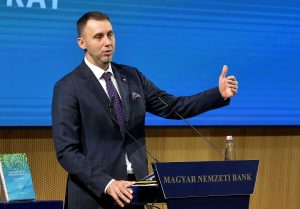 The acceleration in inflation is also a global phenomenon, with July inflation at 16 percent worldwide. Meanwhile, Hungarian growth was 6.5 percent in the second quarter, the fourth fastest in the EU. Regarding inflation, the central bank governor drew attention to the lessons of the 1970s, saying that there should be neither hesitation nor caution in the face of persistent inflation risks.

Barnabas Virág stated that monetary policy does not base its decisions on a snapshot, and the most important task is to avoid second-round effects. According to him,

a prerequisite for sustainable economic growth is to control inflation, and this is currently the focus of monetary policy.

The central bank governor also pointed out that there are no signs of deep recessionary changes at the moment, so it is too early to talk about whether we are facing a truly stagflationary environment. “I do not want to get into a numbers war,” said Barnabás Virág, adding that the National Bank’s inflation report will be published in September, which will reveal more.