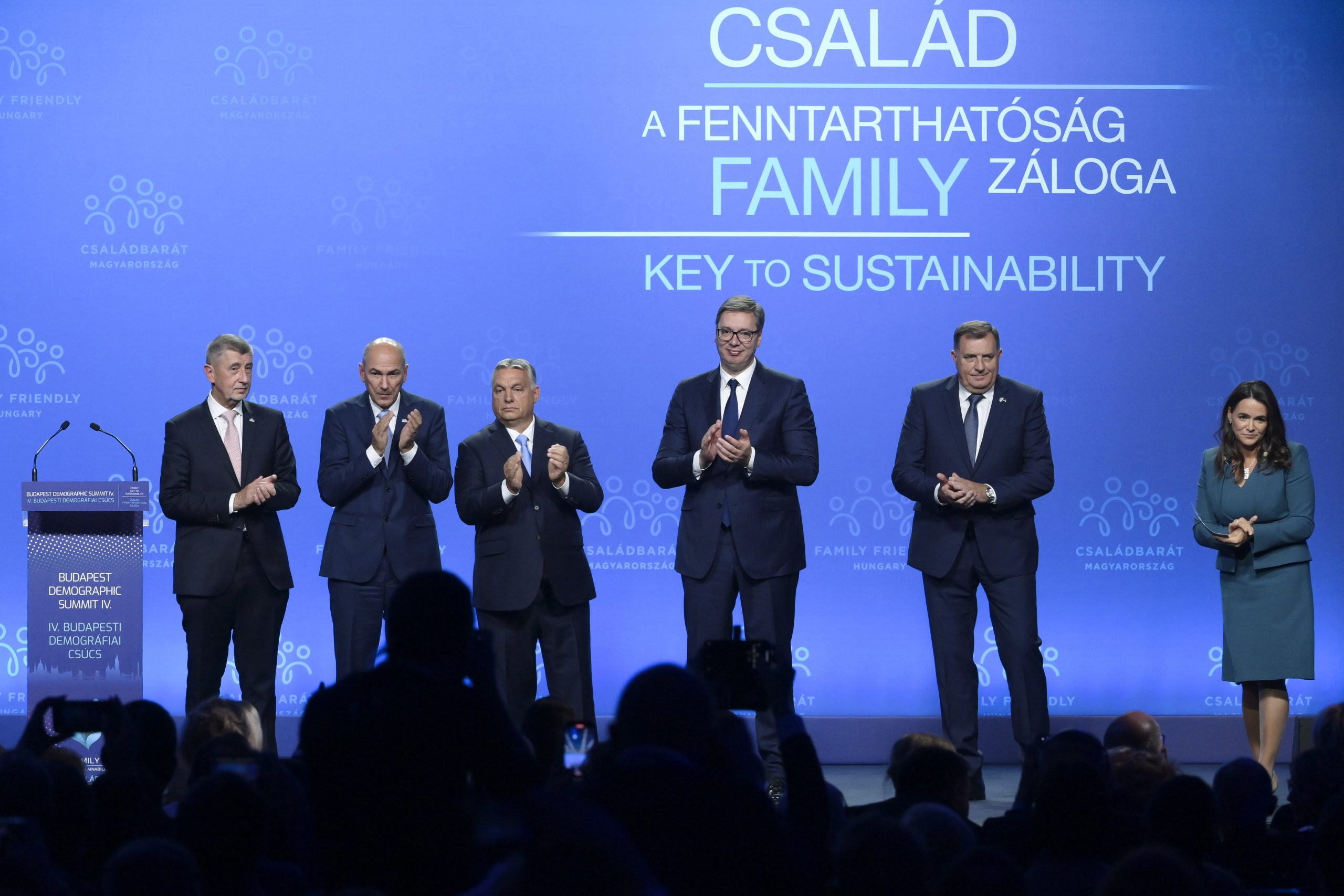 The Hungarian government has been working to help families and turn a 40-year downward trend in demographics, Katalin Novák, the minister without portfolio in charge of family affairs, said in her address opening the 4th Demographic Summit in Budapest.

The Orbán government has seen it as an “opportunity, task, and duty” to work for families since it came to power in 2010, and has received a mandate from voters to do it, Novák said. Demographic forecasts “do not have to be accepted as facts, they can be changed,” she said. 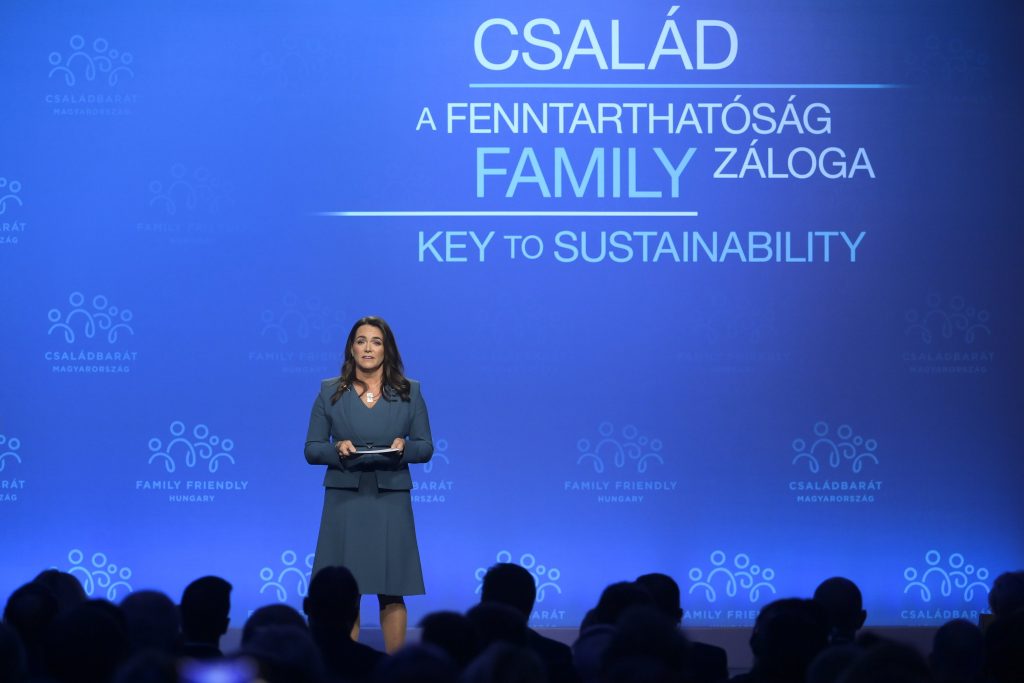 Novák said a “demographic winter” was threatening the developed world as well as Hungary, warranting cooperation and events like the summit to find solutions. The summit will focus on the connections between demographics and sustainability, featuring some 70 speakers from 18 countries, Novák said earlier. Some 500 attendees are expected, including state and religious leaders, scientists, and NGOs.

Addressing the summit, Aleksandar Vučić, the Serbian president, said that the issue of demography is becoming the most important political question, as it concerns “our survival.” The Serbian government had learned a lot from the previous demographic summit and introduced several measures modeled on the Hungarian system, he said. In the context of social media and its influence on the public, Vučić said that “liberal political Marxism” enticed people to pay attention to things that change a part of their lives but at the same time lead them to lose another part of it. Vučić also touched on the topic of the rule of law, which he said had become an issue that could be used to bring “disobedient” countries into line. 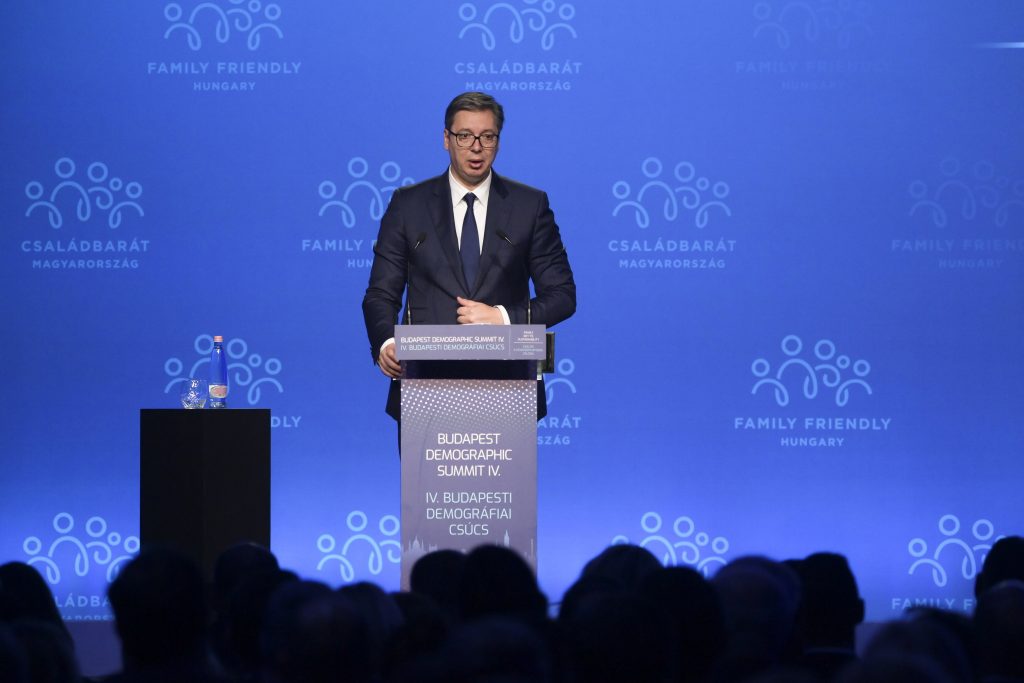 Vučić said Europe had been contributing less and less to global economic growth in recent decades, adding that within a few decades Nigeria alone would have a larger population than the European Union or the United States. “It is high time to act,” he said.

Slovenian Prime Minister Janez Janša called population decline an enormous problem affecting the future which cannot be ignored. “The European Union is currently debating the future of Europe. […] This gathering today is one of the most important pieces of this debate,” he told the summit. 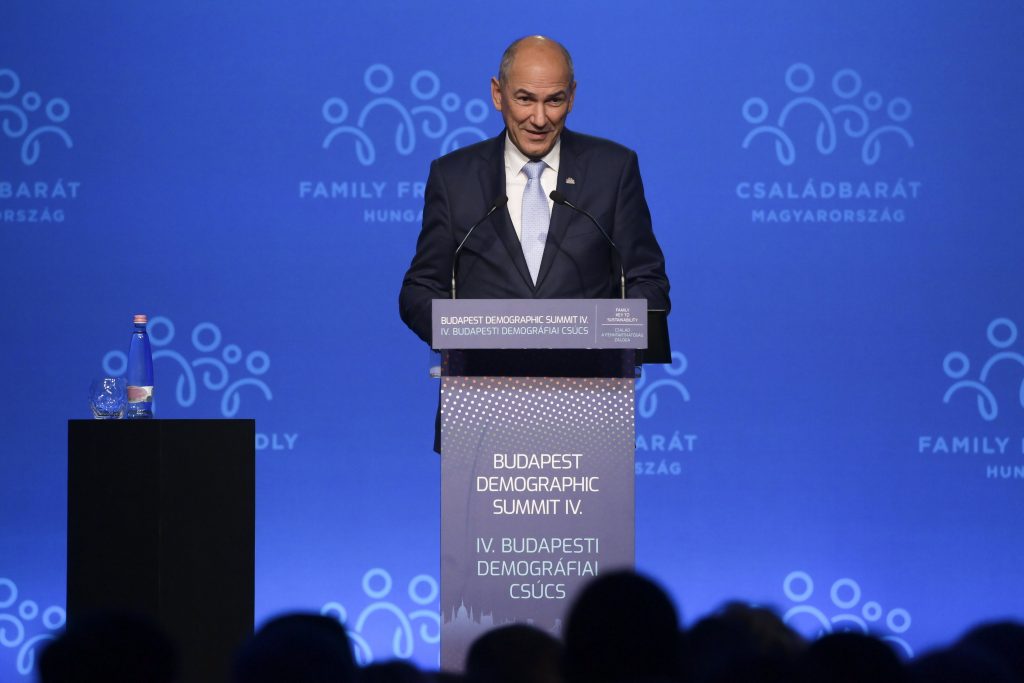 Janša noted that the birth rate in Europe had dropped by 40-70 percent since the 1950s and 17 out of the 27 EU member states had a negative birth rate, which has worsened during the Covid crisis. “We need bold proposals, some kind of a European program to put the family first,” he said.

The Association for Women (Nőkért Egyesület) was present in the Várkert Bazár before the participants arrived at the IV Budapest Demographic Summit. The activists of the association held up a banner saying “From our money? No! About our bodies? No! Without us? No!” The organization has written about their problems regarding the event on their website, mentioning that besides the dominance of men among the invited speakers, they find it even more worrying that the government is hosting, at public expense, “public figures who are extremely anti-feminist, homophobic, and racist,” and who would be much less welcome in other countries.

Milorad Dodik, the Serbian member of Bosnia and Herzegovina’s presidential troika, said Europe needed to favor the family over migration. Europe needs to remain stable not just economically, but also in the area of demography, he said, adding that this required supporting families. Dodik praised Hungarian Prime Minister Viktor Orbán’s family policies and expressed hope that they would be adopted by more and more countries in Europe. 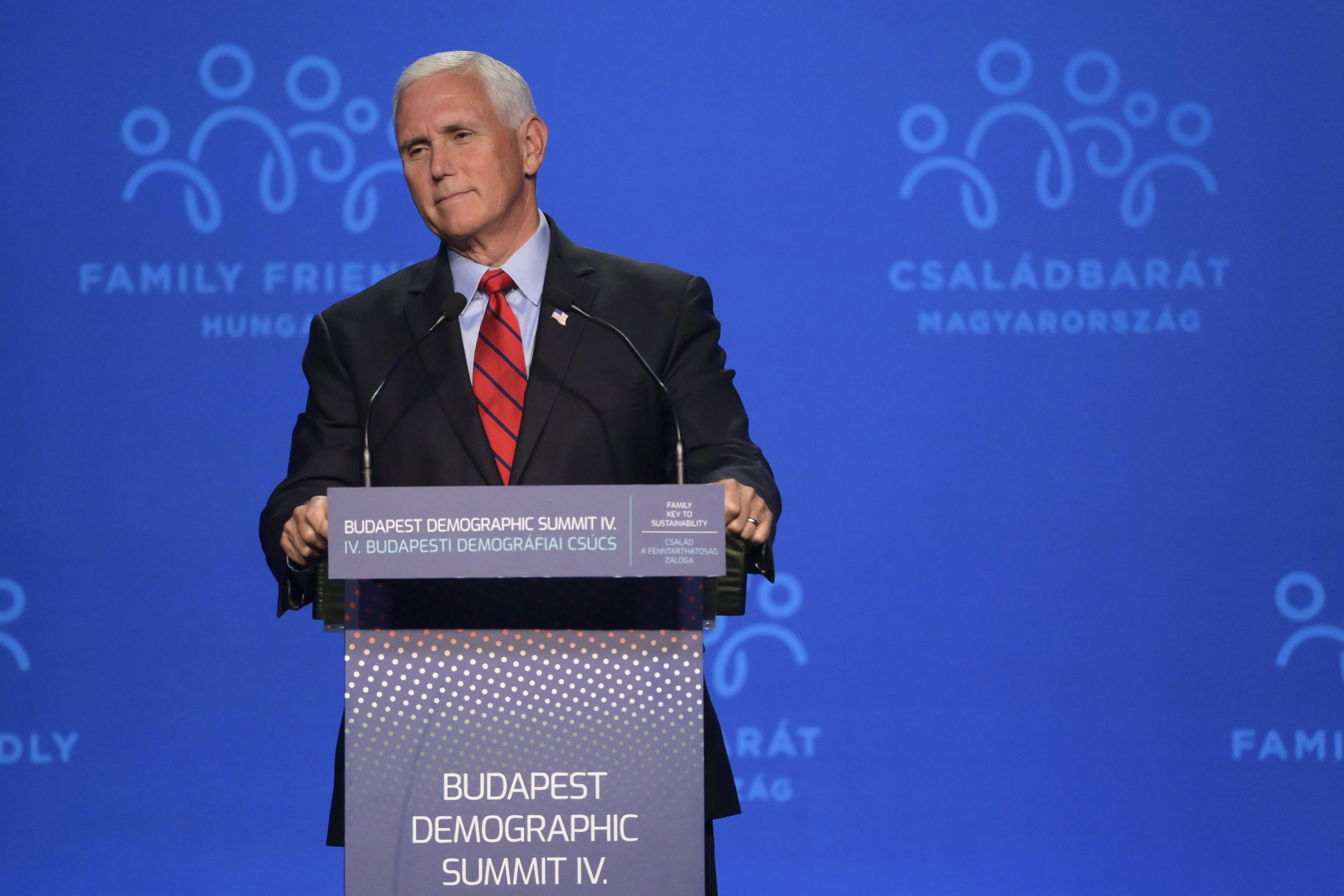 "For our civilization to prosper, if we're to pass on the rights and the freedoms and the values that we cherish to the next generation, our highest priority must be to preserve, renew and strengthen the families upon which our nation and our civilisations have been built." Pence said.Continue reading

Czech Prime Minister Andrej Babiš said Europe needed to increase its birth rate in order to halt its population decline. He said the coronavirus pandemic had proven that nation-states built on families were irreplaceable. Although the Czech Republic has seen an increase in its birth rate in recent years, it still has a ways to go to reach the 2.1 fertility rate necessary to maintain its population, he said. 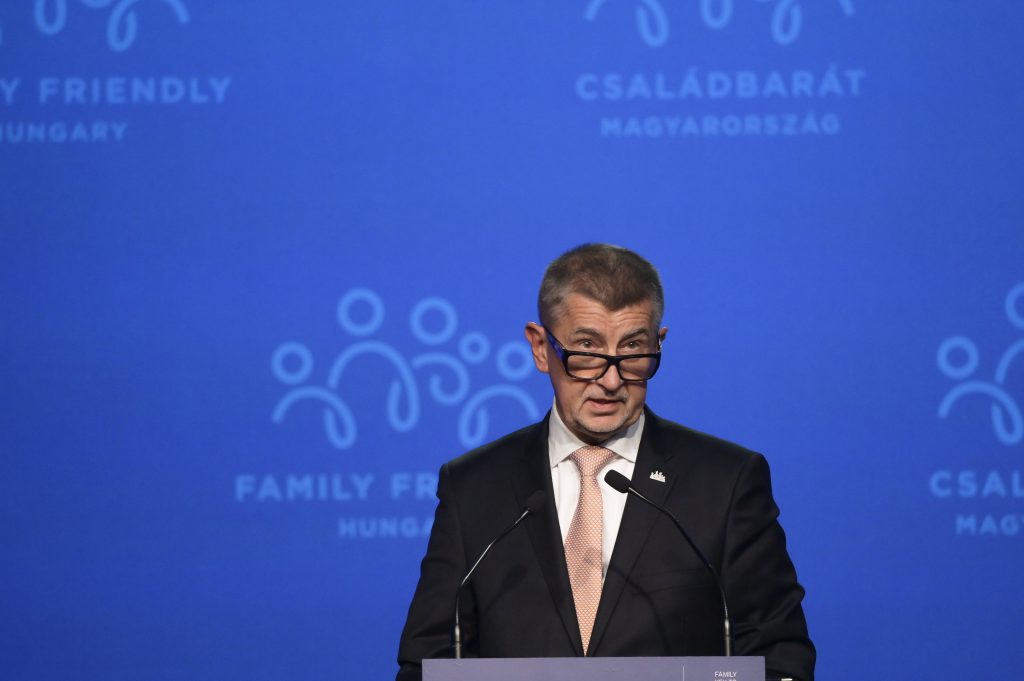 Babiš criticized the argument that having fewer children would reduce one’s carbon footprint, saying it was “absurd” not to have children in the interest of climate protection.

Leaders sign joint declaration at Budapest Demographic Summit
The heads of state and government participating in the 4th Budapest Demographic Summit have signed a joint declaration on supporting families, Hungary’s minister in charge of family affairs said on Thursday. “We see Europe’s demographic renewal, sustainability and future in strengthening and supporting families,” Katalin Novák said at the event. In a Facebook post, the minister said the declaration bound its signatories to encourage couples to have children, promote fair wages and the development of labour-based economies by pursuing effective family policies. The declaration also urges the European Union to consider demographic aspects when shaping its policies.