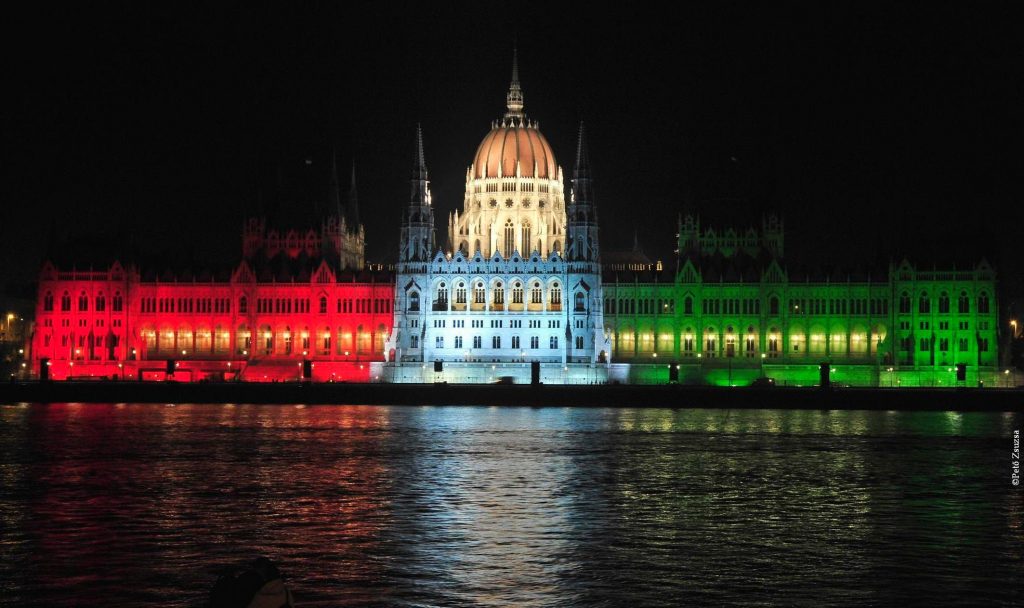 Come and “walk through” the most important locations of the 15 Revolution of 15 March 1848 with our slideshow and readthrough. Come with us and imagine where would the Hungarian Revolutionaries print the 12 points, where would Petőfi read out the Nemzeti Dal (National Song) if they were in charge today… This was the path of freedom in 1848.

On the 15th of March 1848, it was a rainy morning and a wet day. However, this was not a barrier for the Youth of March to keep on coming together in the famous Pilvax café. In the beginning of the 19th century, Pest-Buda developed a lot and a new intelligentsia was born thanks to economic, political and societal reasons.  The branch of these well-educated, writers, poets, thinkers (Pál Vasvári, Mór Jókai, Sándor Petőfi) had their usual meeting in the Pilvax café, but on the 15th of March something happened. According to the thought and the news of the revolution in Paris, they decided to act. In the Pilvax they put the 12 points in writing. The 12 points of the Hungarian Revolutionaries of 1848 were a list of demands written by the leaders of the revolution. This is the place where the spark lighted. That time the Pilvax was a classic-style café as it is used to be in the 19th century. 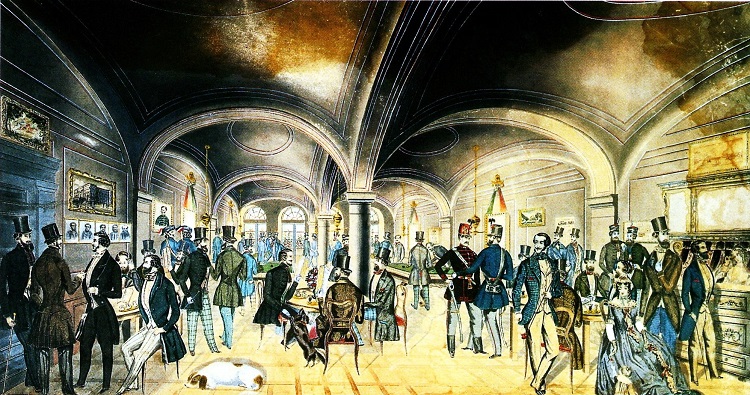 What do you think what is it today? Maybe Jókai would grab a Guinness to collect the points.

From the Pilvax, they walked to the University at the Egyetem tér (Egyetem Square). There, the students joined to them and on the march many of the inhabitants of Budapest did it also.

The next stop was the Printing House of Landerer and Hackenast. It was also in the historical downtown of the city. The increased mass arrived to the corner of the Szép utca and Kossuth Lajos utca (as the streets are named today). Here after they impounded the printer machines (according to the advice of the printer-master Landerer) they started to print and hand out the 12th points and the Nemzeti Dal (National Song). This is the first place and time where the iconic face of the Revolution Sándor Petőfi declaimed the Nemzeti Dal. (Click to the link to read the English version of the poet). 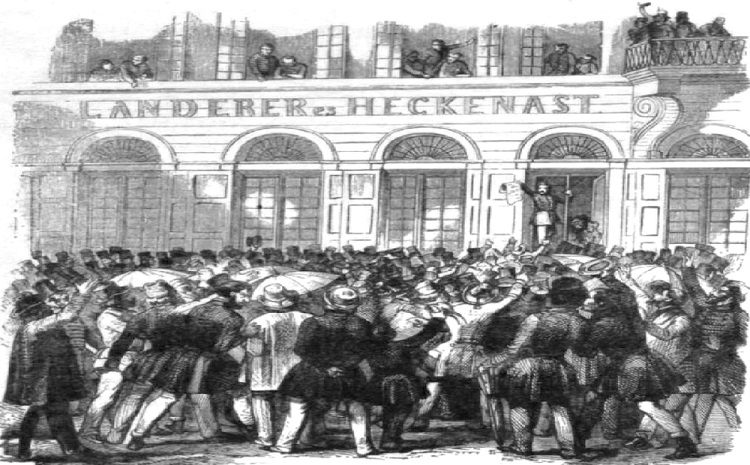 It is hard to imagine today how would they stop the traffic on the two times 3-lane Kossuth Lajos utca.

After a “lunch-break”, the mass revolutionary was gathering in front of the National Museum in the afternoon at 3pm. About 10,000 people came together by then. From the stairs of the Museum Vasvári announced the 12 points to the audience. 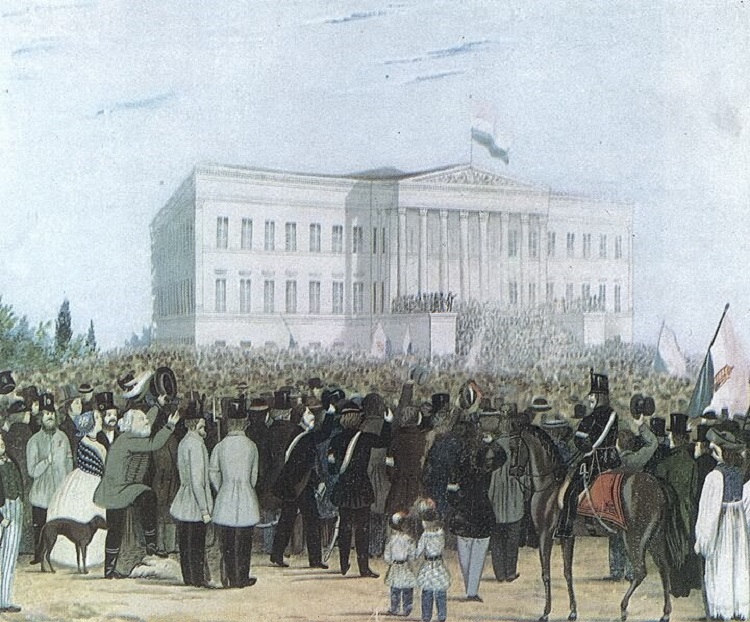 Then the revolution arrived to the City House of Budapest and to Buda visit the Council in the Castle of Buda to get freedom for Mihály Táncsics.

It had to be amazing how the mass passed the Danube on the “ship-bridge” because there was not any other bridge existing over the river, yet. 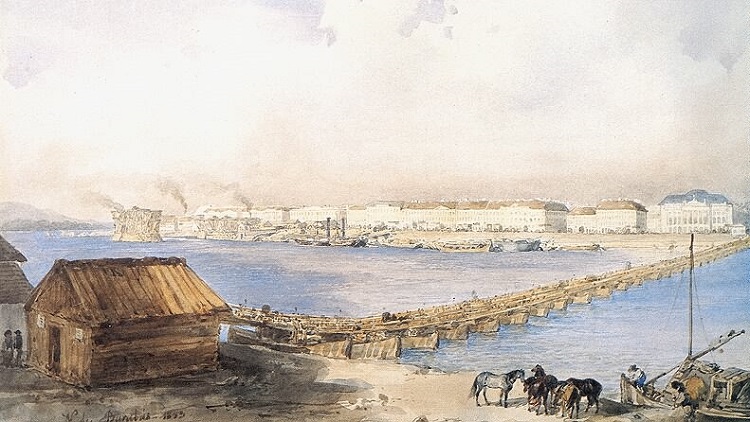 Today they might use the Chain-bridge for sure or take the bus no. 16 to the Castle. 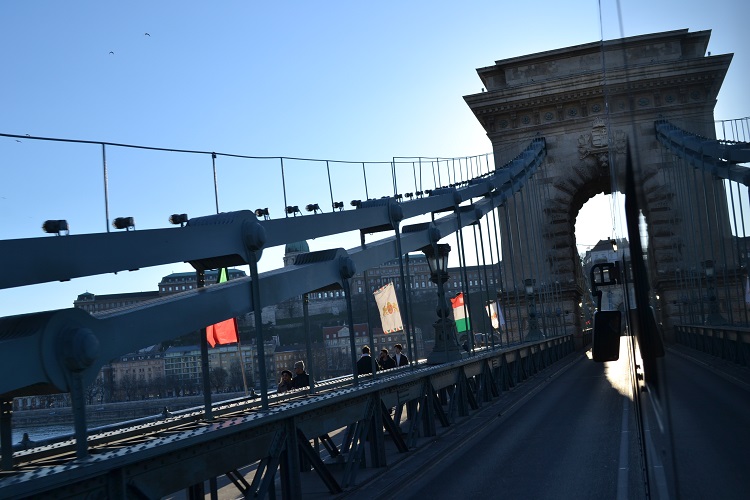 After returning to Pest, they arrived to the National Theater where the opera called Bank Bán of József Katona was on the program. As they entered to the show the performance stopped and the united revolutionary mass of Budapest singed the National Anthem, the Appeal together.

This is where the National Theater was in 1848.

Today it is a business center on the Astoria.

The Revolution of the Hungarian Freedom on the 15th of March 1848 won without a drop of blood and disorderly conduct with the force of the honest and straight thirst of freedom.

Well, the capital developed and changed lot but the spirit and the strength the love of freedom stayed the same in the heart of Europe. 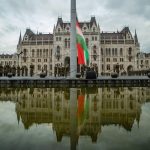