Wow! Really? You Can Buy Hungarian Citizenship on the Dark Web for $15,000? 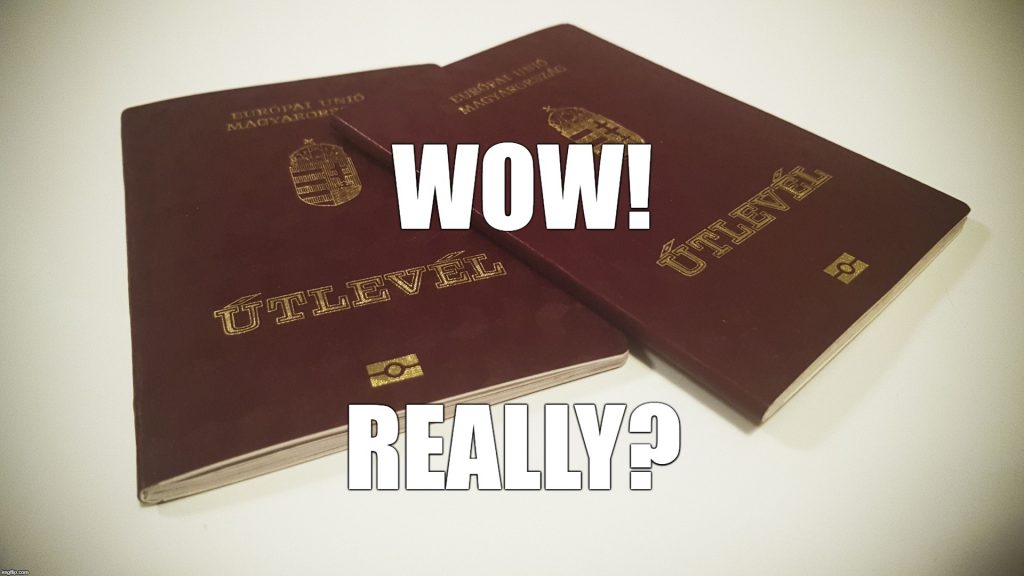 In the latest installment of our (semi)regular segment, Wow! Really?, we examine little-known or unexpected facts about Hungary and Hungarian culture. Today, we take a look at how to anonymously purchase Hungarian citizenship through the online black market.

Earlier this week, Hungarian news site Index.hu published an article which took a look at just how easy it is for criminals and others to illegally obtain Hungarian citizenship.

The site’s journalists went onto the dark web, an underside of the internet that requires special software to access, and that has become infamous as “the Web’s secret space for drug dealers, arms traffickers, hackers and political dissidents.” There, they attempted to see whether it would be possible to buy one’s way into Hungarian citizenship. The results were striking: an advertisement on the online marketplace Dream Market was offering

100% genuine Hungarian passports (the full citizenship, in fact) with which you can cross any border and work and live anywhere in the European Union.

For 1 bitcoin (approximately $5,000 USD) the seller would “submit a citizenship application for you through our contacts in a certain Hungarian municipality,” would take care of all the other necessary documentation, and even “send you an official government-issued receipt stating that the documents have been submitted.”

The seller also asked for an additional 2 bitcoins ($10,000) once the citizenship paperwork was completed, bringing the total up to $15,000.

Naturally, as all of this was advertised on the dark web, it is unclear how real this offer is, or if it is simply a scam that would enable the seller to walk away with $5,000. In any case, all of this comes on the heels of a series of reports describing the ways in which Russian an Ukrainian criminals have taken advantage of loopholes in Hungary’s dual citizenship program in order to gain an EU passport.

The program in question is the Orbán government’s “simplified naturalization” route to dual citizenship, which was introduced in 2011, and whose chief beneficiaries have been ethnic Hungarians living in the Carpathian Basin who did not qualify for dual citizenship before. As you can see in the screenshot below, the seller himself notes that

A few years ago, for political reasons, Hungary offered a much-simplified nationalization procedure. To qualify you needed to demonstrate a modest knowledge of Hungarian, a link to a Hungarian ancestor and no criminal record. So far, millions of citizenships have been handed out to people in neighboring countries (Croatia, Romania etc) who meet the criteria. 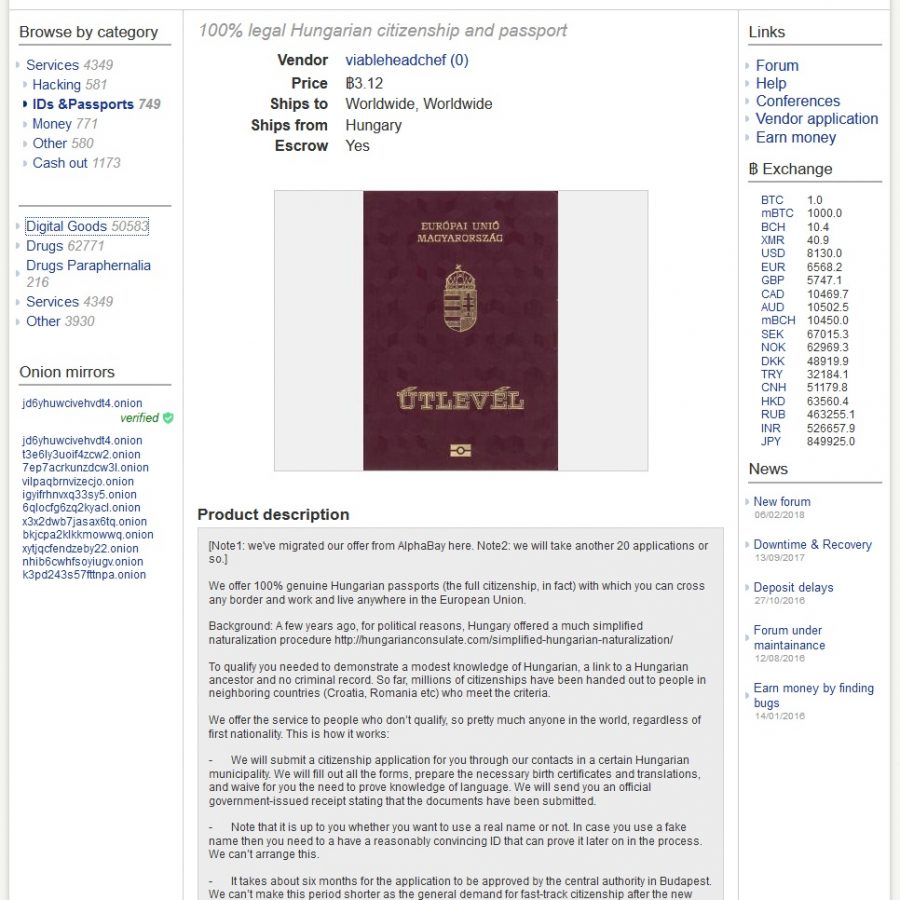 He goes on to add that “we offer the service to people who don’t qualify, so pretty much anyone in the world, regardless of first nationality.”

One of the “simplified naturalization” program’s most widely-known “secrets” is that, while applicants theoretically must demonstrate knowledge of the Hungarian language in order to receive citizenship, in practice this is not the case; in the United States and Canada, in particular, potential applicants have to do little more than memorize a few sentences in Hungarian in order to “demonstrate” their supposed understanding of the language.

Likewise, some critics argue that the government does not do nearly enough to actually verify the Hungarian ancestry of applicants, and essentially rubber stamps applications. For this reason, Index claims that shopping on the dark web for Hungarian citizenship would likely be unnecessary for anyone but criminals, as most people could easily make up a Hungarian ancestor and fumble their way through a few sentences of Hungarian for far less money (although the official process does tend to take far longer than 6 months).

And, as Index also notes, at $15,000 this ‘darknet citizenship’ is significantly less expensive than the Orbán government’s controversial “Residency Bond” system, which allowed wealthy foreigners to essentially purchase a permit of permanent residency from the government in exchange for a deposit of 300,000 euros, which would later be returned to the new Hungarian resident. Following scandals, allegations of corruption, and a great deal of political criticism, the program was suspended last year, although it has not been legally ended.

Hungarian passports have been floating around the internet for years, long before Index’s recent dark web investigation. In 2014, a pair of Swiss artists created an automated online shopping bot that they called “The Random Darknet Shopper,” which was given a budget of a $100 a week to purchase items at random on the dark web; they then took these items and compiled them into an art exhibition in Zurich that they entitled “The Darknet: From Memes to Onionland.” Interestingly, one of the items that the program purchased, in addition to 10 ecstasy pills, was a