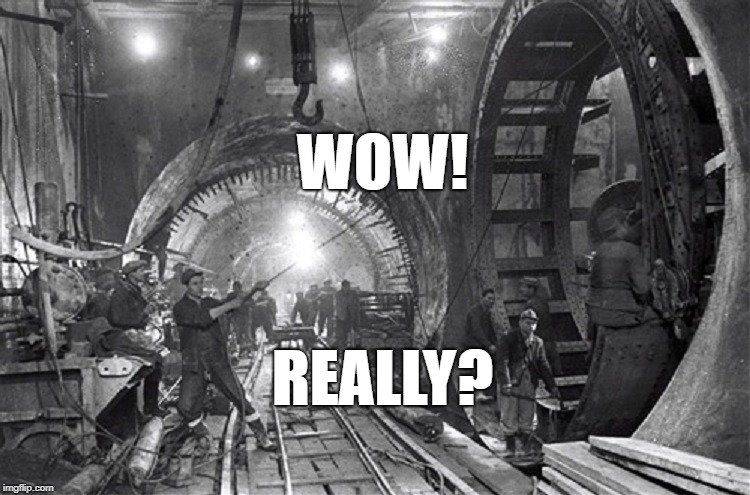 In the latest installment of our (semi)regular segment, Wow! Really?, we examine little-known or unexpected facts about Hungary and Hungarian culture. Today, we take a look at a barely-remembered historical event that almost ended in a deadly catastrophe: a sinkhole that was barely prevented during the construction of Budapest’s M2 Metro line.

One afternoon in December, 1952, the Puskin Cinema audience was in high spirits when their favorite comedian appeared on the screen. Despair and panicked flight would have surely replaced their gaiety had it been known that 30 meters underground – just under the cinema building- a life and death struggle to save the cinema building was transpiring. Unfortunately, during the strife, death claimed several victims, but ultimately life was victorious. No building damage occurred; they managed to save it without the cheerful cinema audience and the house’s several hundred other occupants ever becoming aware of the danger. Many will only learn of the happenings of that day through this article.

So, what happened on that December day under the Puskin cinema?

The construction of the tunnel line between Astoria and Deák tér stations proceeded using mining methods; the clay soil was relatively stable. The work space was subject to 1.8 atm of excessive air pressure due to to containment of the groundwater; however the high air pressure also assisted in supporting and stabilizing the soil. In addition to the soil being tolerable, construction methods that allowed relatively high performance were implemented. The tunnel was altogether built in two parts: first the top half, followed by the lower section.

The upper half of the tunnel was completely undone and replaced with dome-shaped steel arches to support the ground. 70-80cm of the tunnel was built in this manner per day which- for the mining method- was decent progress. The soil, however – as construction of the tunnel progressed – suddenly “changed”, meaning the advancing tunnel reached loose sand. Builders immediately switched to safer methods. Disrupting smaller surfaces, they implemented the so-called Belgian method, which calls for the use of wood anchors. They stuck with this safe method until they got out of the sandy region of the pit and clay reappeared overhead. This was a huge relief for the workers, since the traditional but safer method had resulted in slower progress at the cost of much more work.

When the “good old” soil reappeared, they returned to faster construction methods. After a few meters of progress, catastrophe ensued.

Accompanied by a dull roar, a colossal amount of earth crushed the steel arches, burying one man and injuring two others. This plummeting patch of earth turned out to be sand, despite planners’ beliefs that they had left sandy areas behind.

Above the tunnel, a frighteningly large cavity of approx. 200 m³ had formed. After 2 nights of difficult labor, the only thing they were able to retrieve from underneath the collapsed ground was the buried construction worker’s body.

The most urgent thing to do was to fill the cavity, in order to save the building above it. They built a 1-meter-thick brick wall in the completed tunnel, and through the pipes in the wall they pressed cement mortar into the cavity. The injection went on for a week before the cavity was filled. They had to fear for the building the entire time the cavity was being filled.

From the first moment of the catastrophe, serious and responsible consideration went into what should be done about the building full of hundreds of endangered inhabitants. Immediate evacuation of the building would have been the easy and safe solution. However, due to the housing situation in Budapest in 1952, the evacuation of the residents would have caused serious problems. The risk of remaining there – mass casualties – is also afflicted with unforeseeable consequences. The decision was made to delay the evacuation; hope, along with the courage to take responsibility for the consequences of technical deliberation and technical opinions, helped make the decision. A sudden collapse could not occur, as a catastrophe is preceded by sinking over multiple days.

Thus, if the sinking of the building was registered from hour to hour, then it would be possible to empty the building in time; and if no sinking occurred during filling of the cavity, then the disruption and panic of the residents could be avoided. So, they organized a continuous measurement of the building: across the span of 2 weeks, the height of the building’s corners was measured every hour and the conditions for a possible rapid evacuation were prepared (transport tools were at the ready, emergency shelter was arranged)- all without having notified the residents. If the residents became aware of the danger, the thinking went, panic would be inevitable.

Quickly filling the cavities proved to be successful; not even hairline cracks occurred in the building, and altogether it only sank 4 millimeters. The danger was averted.

Let’s return to the topic of the collapse. What caused the collapse? How did sand once more end up in the tunnel, when it had already been left behind?

The investigation showed interesting and undoubtedly unexpected findings. Although the tunnel made it out of the sand, a layer of sand still stretched directly above the thin blanket of clay. What ultimately triggered the collapse: an old soil research well’s traces were found after the collapse, which had been dug in 1942. Cosmic irony just so has it that this drilling created the excavation for the framework of a metro line within the capital’s -aforementioned 1942 study.

From the road surface to the lower clay layers, this drilling “pierced” the soil, channeled the groundwater, and soaked not only the upper layer of sand, but also the material below it. The poling wasn’t enough to support the loose, drenched soil.