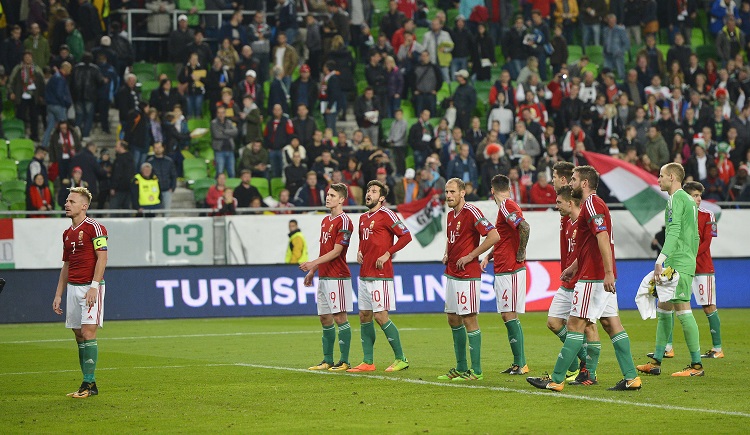 A late goal from corner by substitute striker Dániel Böde gave Hungary a narrow 1-0 home victory against the Faroe Islands in the final fixture of the FIFA 2018 World Cup qualifying campaign in the Groupama Arena in Budapest last night and ensured a third-place finish for his country in the final group standings. However, the Hungarian fans remained more than frustrated with the national team’s poor performances in recent games that broke the country’s World Cup dreams. 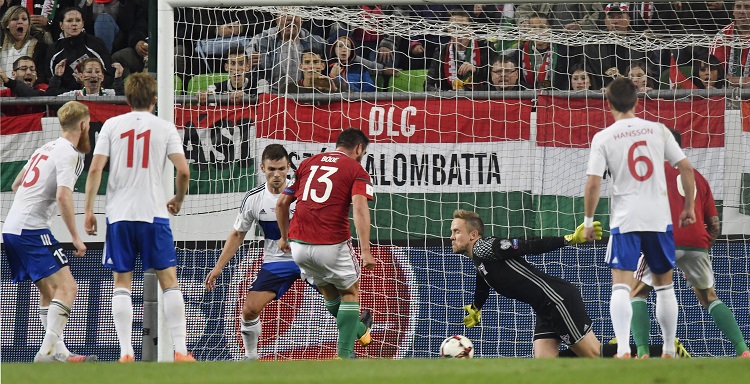 A tepid first half never really sparked into life, despite home-team efforts on goal from Eppel, Patkai, Ugrai and Dzsudzsák, only the first of which from the host’s captain troubling Faroes goalkeeper Gunnar Nielsen at all, but even that curling 20-metre free-kick was punched clear without serious difficulty. At the other end of the pitch, the Faroes created one moment of real danger when Gilli Sorensen plucked a long ball out of the air, cut inside and fired low towards goal from the edge of the area, only for Péter Gulácsi to get down well to his left and gather the ball cleanly at the first attempt. There was little else for either keeper to though in an opening period which remained goalless.

Bernd Storck shuffled his pack for the first time at half-time, bringing on Dániel Böde for Márton Eppel but the pattern on the match didn’t change, Hungary on the front foot far more but unable to break down a stubborn, stoic Faroes defence. In came attacking midfielder Dániel Nagy from the bench as efforts to break the deadlock stepped up a gear and finally the clear opportunity which Hungary had craved came to pass, a right-wing corner earned by Roland Ugrai and curled in by Dzudzsák landing at Böde’s feet just five metres from goal. Faroes goalkeeper Nielsen did extremely well to block the Ferencváros striker’s intial low, first-time shot but he couldn’t do anything about Böde’s second effort on the rebound which found its way past him and nestled in the net to give Hungary a precious lead they never relinquished, despite late pressure from the visitors

Bernd Storck, the under-fire German head coach of the Hungarian team said he was surprised by the negative atmosphere in the stadium. He said: “It is not easy to play football when our own fans support the opponent. I’ve never experienced such atmosphere before, I’m glad it did not have a negative impact on the team and we could win the game. I’m also disappointed with our recent results .We’ve finished third-placed, but we should have collected much more points. However, we’ve started reforms that need more time and players with international experience. The fans need to be more patient.”

Yesterday’s result means that Hungary secure third place in FIFA 2018 World Cup qualifying group B, well behind higher-ranked teams Portugal, who have qualified for the World Cup in first spot, and Switzerland, who enter the play-off stage as one of the eight best group runners-up. Hungary’s recent results also mean, that the national team will be involved in the C league of the UEFA Nations League, a new international football competition in Europe to be launched in September 2018. Hungary will compete against Romania, Scotland, Slovenia, Greece, Serbia, Albania, Norway, Montenegro, Israel, Bulgaria, Finland, Cyprus, Estonia and Lithuania.