Wishing Tree at Sziget Festival: Does it Make Your Dreams Come True? 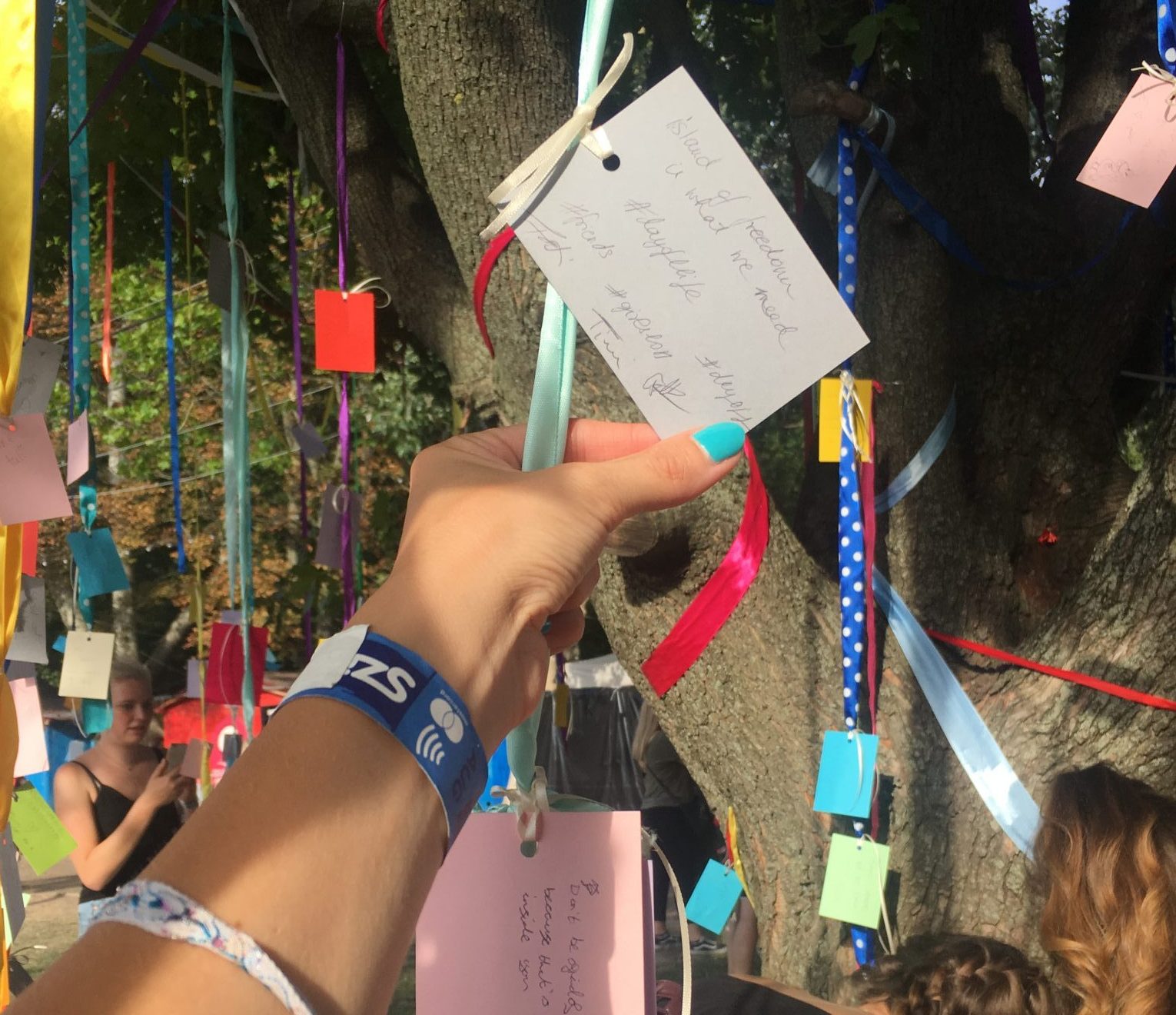 The Sziget Art Of Freedom project’s creators design the most amazing and unique buildings, statues, and installations, year after year. Hungary Today has checked out some of these amazing projects, such as the wishing tree, where festival-goers can write their secret wishes, craziest ideas, and biggest hopes down on a piece of paper and place it on the tree with a colorful ribbon – although the designers claim they are not the “tooth fairy,” but maybe some of the wishes really do come true. We have talked with the creators about the project itself and the funniest stories they have seen at the foot of the “magical tree” during the festival. 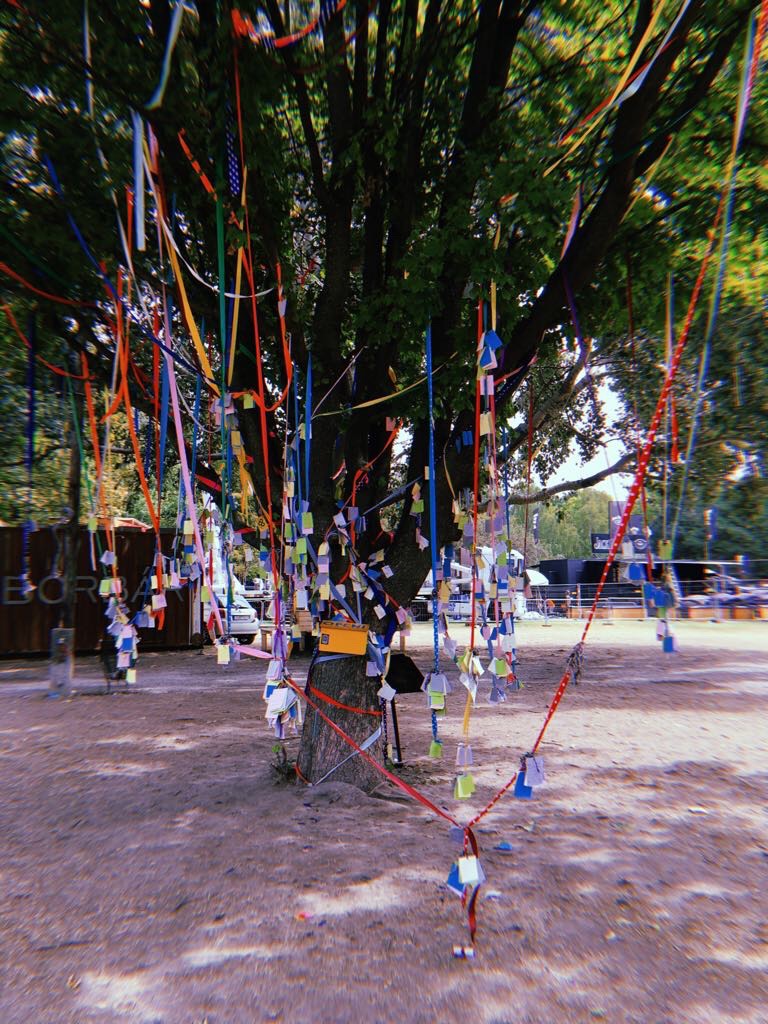 The creators who came up with the idea, Vivien Sáska and Ádám Stollmayer got into the Sziget’s Art of Freedom project in 2017, after several years of attempts with the ‘Wishing Tree’ installation. They had to meet many requirements when they came up with the installation: reflect the diversity of the festival without damaging the venue, and most importantly, add something extra, a bit of color and value to the festival and the audience. 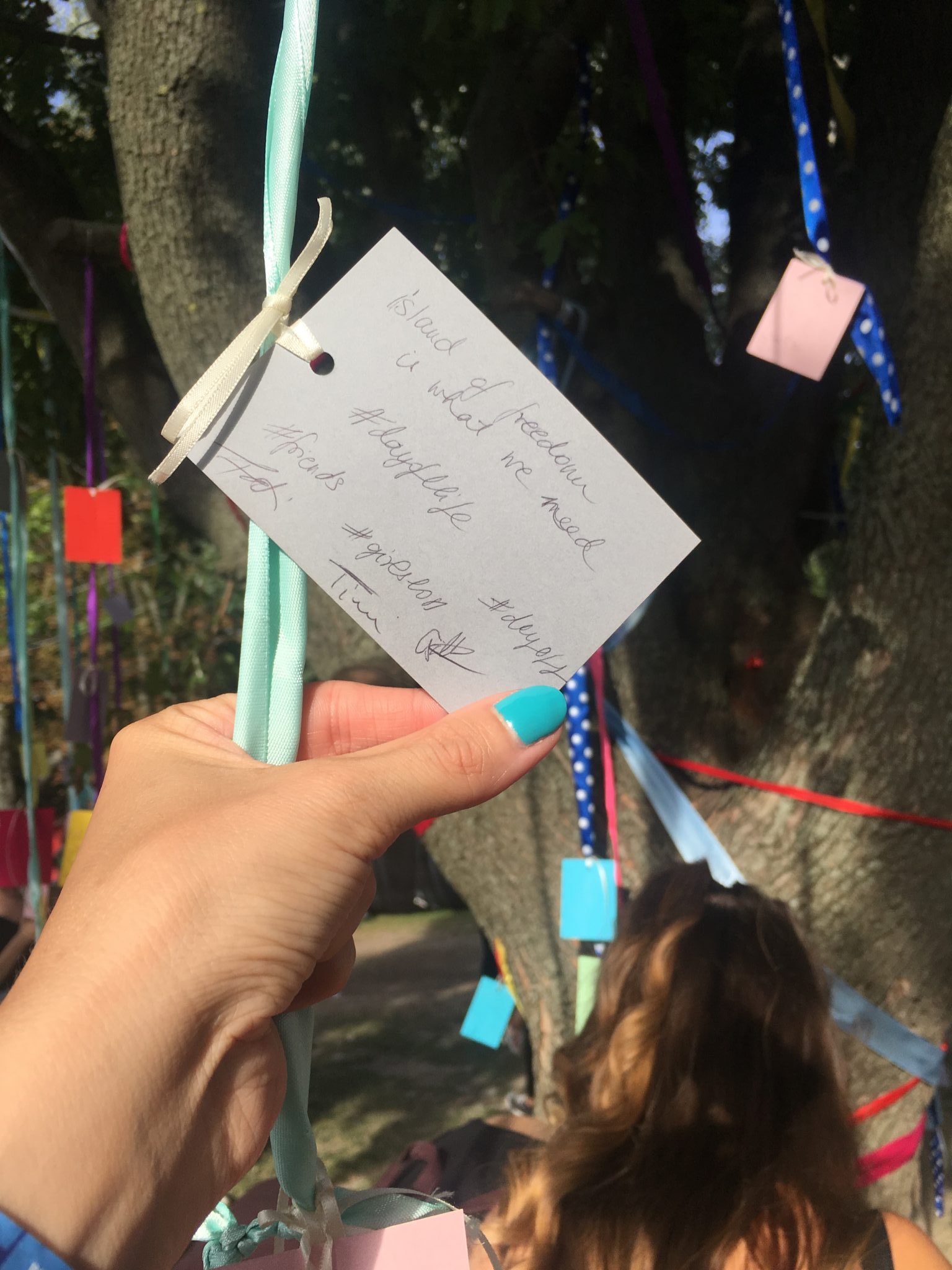 Vivien Sáska said that during the 10 years of visiting Sziget Festival every year, she has seen some extraordinary ideas, but most of them were not interactive. So she already knew in the first stage of the planning that she wanted to create something fun and interactive. 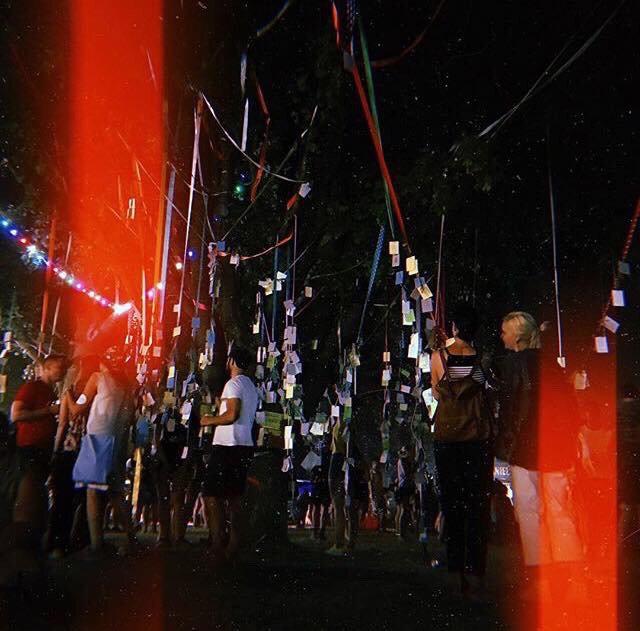 First, she and her boyfriend thought about big volume things, but they had no idea how much work, time, and money is needed for such an installation to be carried out.

Then one day, I was looking at old pictures from my trip to Japan, and I saw a picture of a wishing tree what they call, Tanabata tree. I was wondering how feasible could it be at such a festival as Sziget. 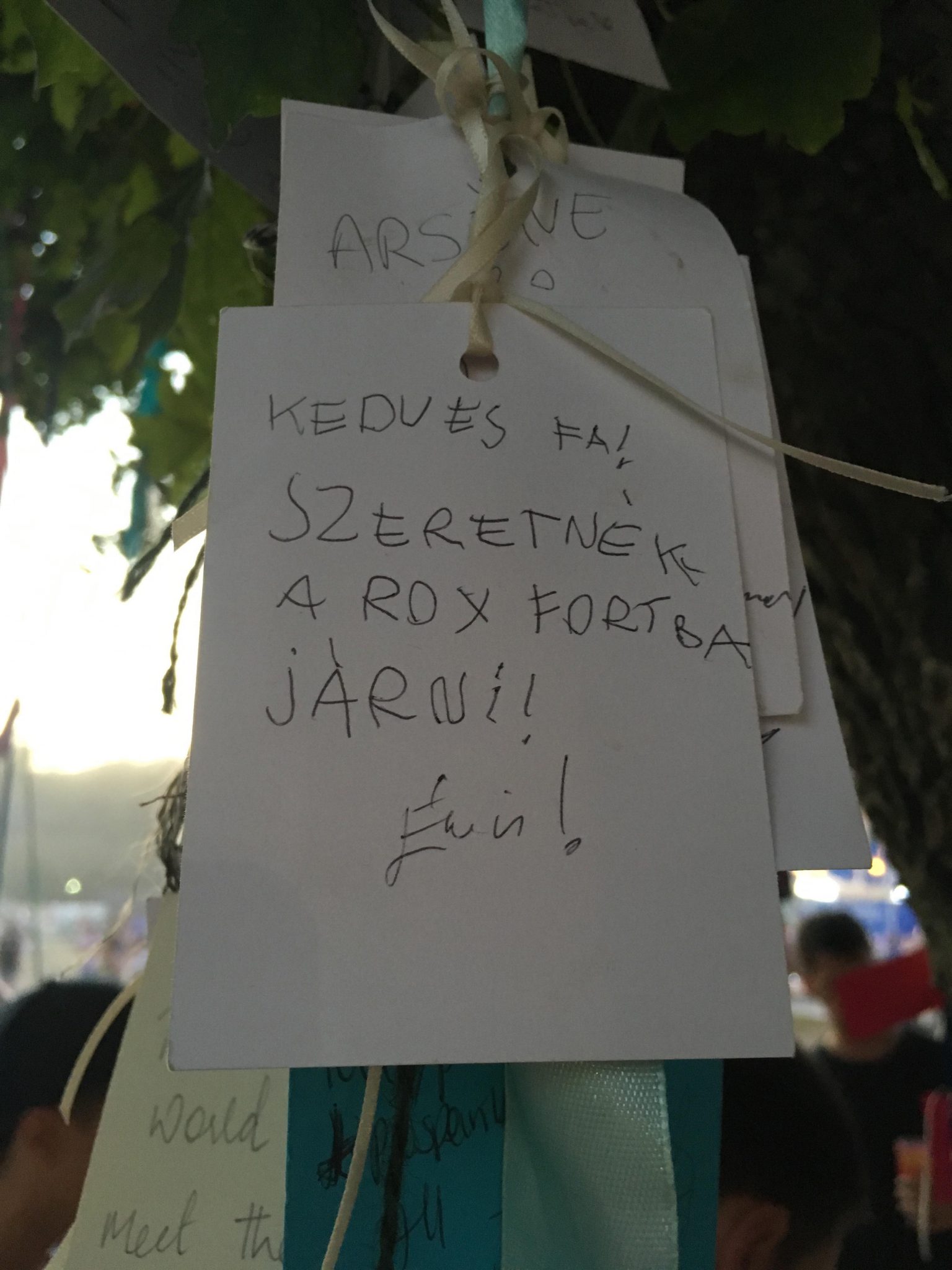 Vivi explained that in Japan, the tree works differently than theirs: they use pre-made colorful labels that people draw randomly from a bowl and can hang on a bamboo tree. There were people who brought their own wishes and origami creations. This was the original concept and the ‘Wishing Tree’ project for the Sziget Festival grew from this.

We had to tackle some difficulties first; for example, there are very few trees suitable for an installation like this. This is how we came to a solution: fusing the Japanese idea with a Hungarian tradition, the maypole (májusfa). And what can reflect the diversity of the festival more than colorful ribbons? 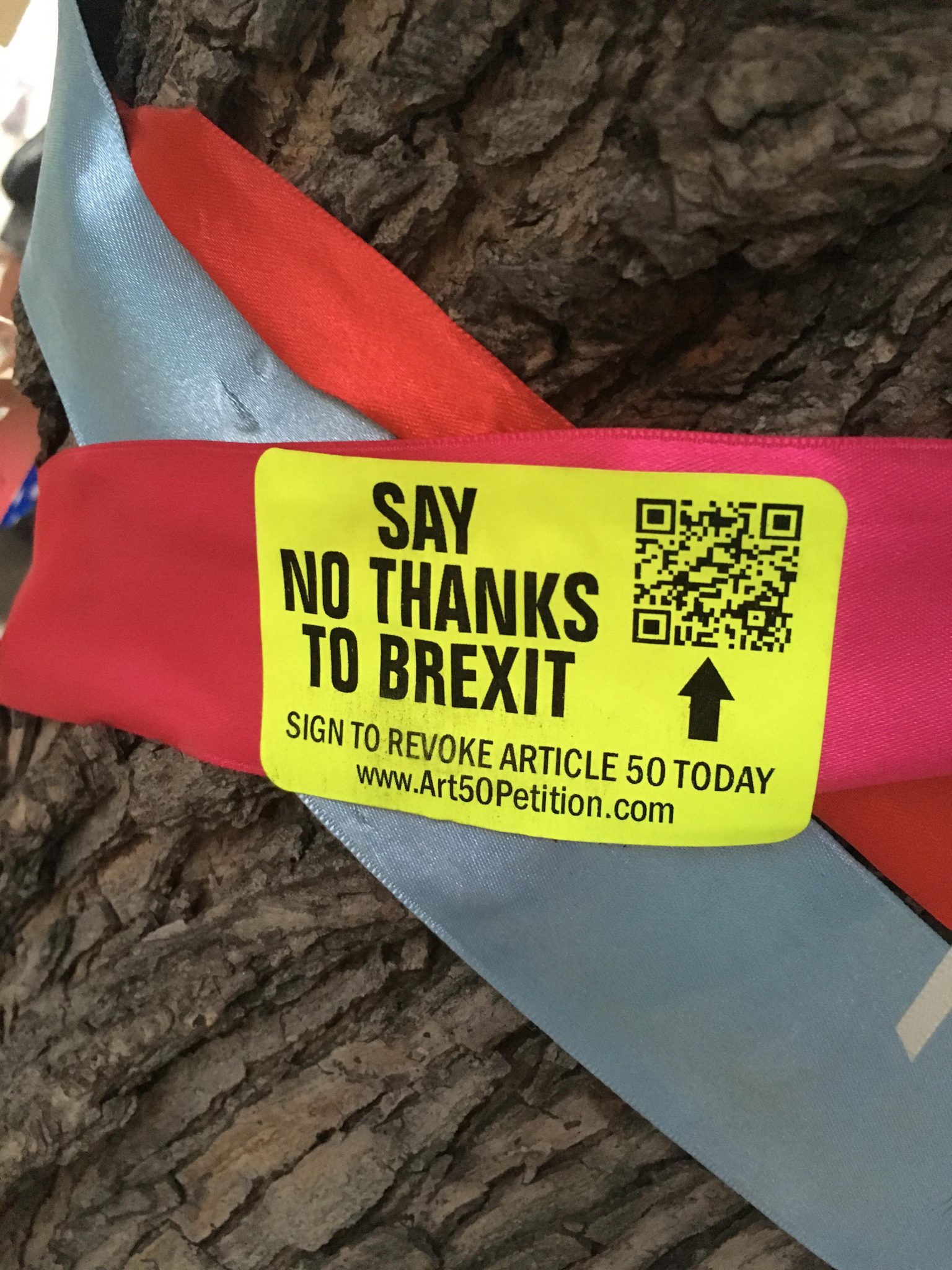 This is the third time that Vivi’s project can be found at the festival and it becomes more and more popular, mostly because of its central location by the main stage. Some people even stay to read others’ funny or touching wishes. 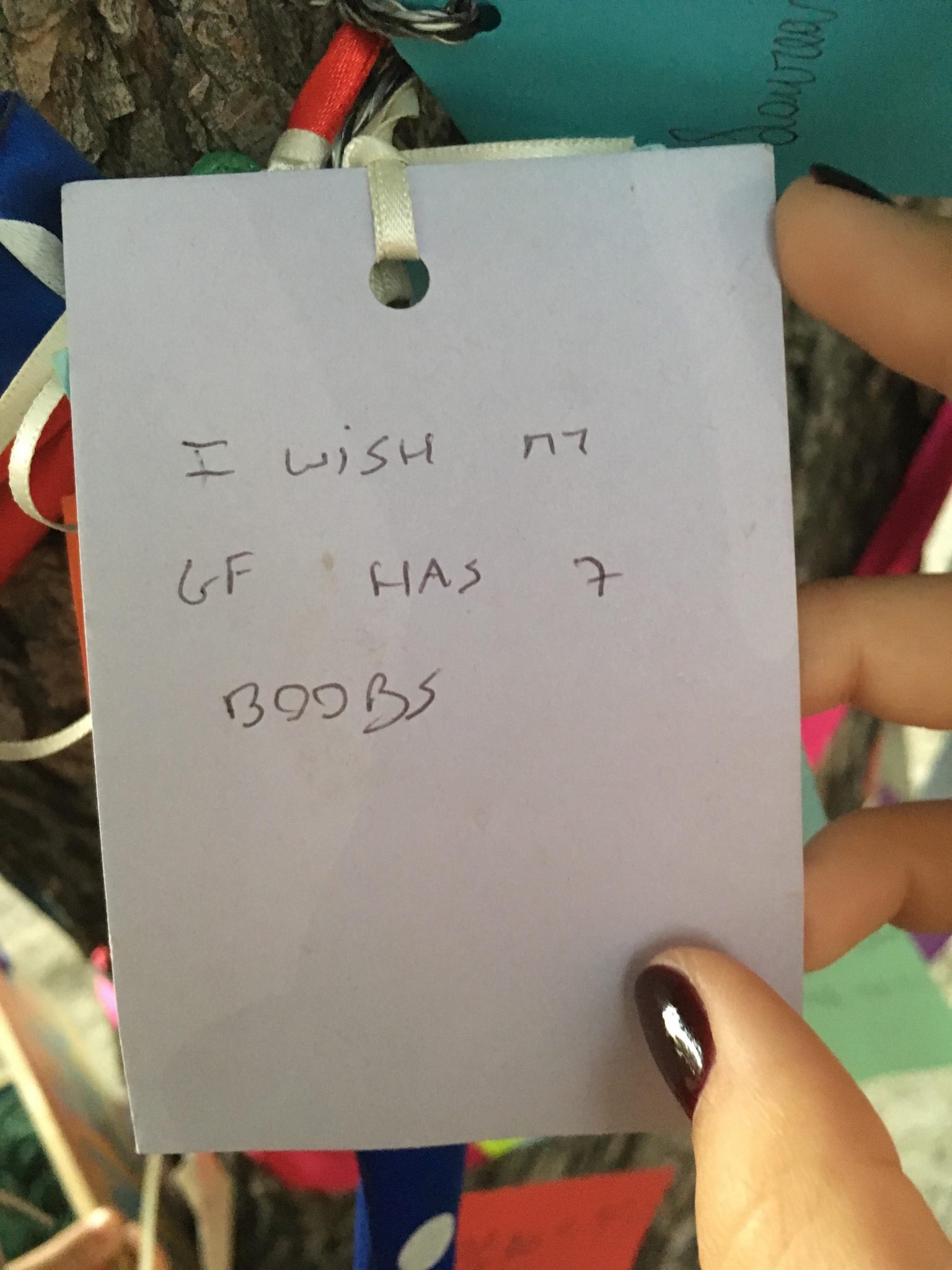 She also talked about some of the funniest experiences with the installation, such as when someone hanged condoms all over the tree, wishing “safe sex” for everyone.

Once I also noticed a group of 7 or 8 people who built a human pyramid just to hang their wishes on the highest branch of the tree, but we also had a couple who said they met at the tree and are now together. Some even put their phone number and tent “coordinates” on the paper – it’s like a weird kind of Tinder. 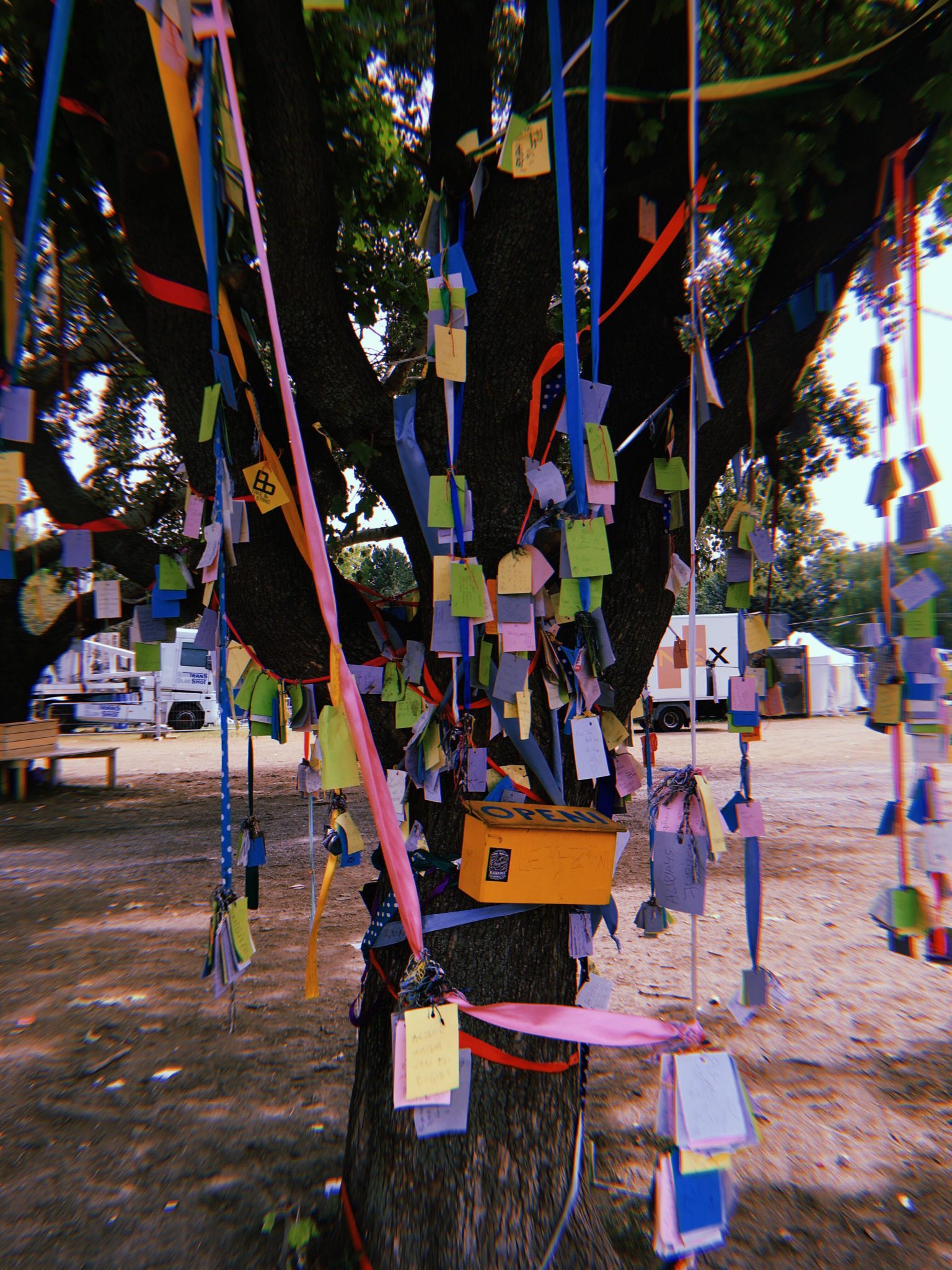 However, taking care of the installation is not only fun: during the course of the festival they visit the tree two or three times a day to check that everything is in order and place blank paper and new pens.

Windy weather does not favor us, so in this case, we try to remove the ribbons stuck on the tree to make them accessible to people of all heights. But the hardest is the time we spend to prepare the 5-8000 pieces of colored paper that we cut out, perforate and put ribbons on. But it’s worth it, seeing that we make people smile for a minute or two.

Vivi said that even preparing the project is a community work, and their friends, parents, and grandparents all help out. 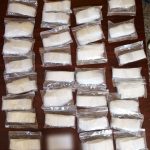