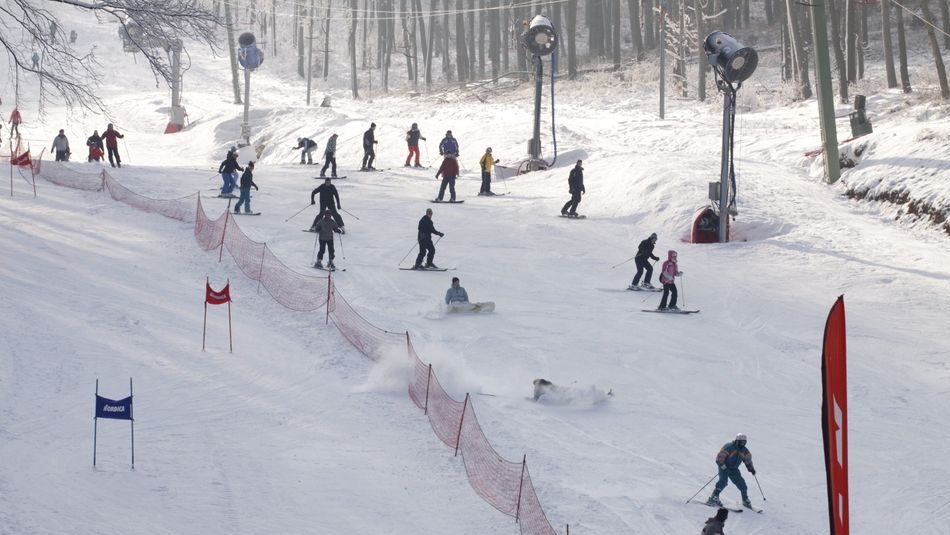 While Hungary may not be as well-known for its ski slopes as some of its neighbors, it is nevertheless home to some interesting, fun places where locals and tourists alike can enjoy quality outdoor excitement.

As winter heads into full swing, the country’s numerous ski resorts are opening throughout the country, offering visitors opportunities to ski, snowboard, and even sled in the heart of Central Europe. Here, then, are some of Hungary’s most exciting spots for skiing and snowboarding this winter.

One of the slopes at the Visegrád Ski Resort in Northern Hungary (Photo: visegradsipalya.hu)

Hungary’s tallest mountain at a height of 1014 meters, Kékestető is home to the country’s longest-running ski slopes. In general, the first snows here fall in November, meaning that most seasons come to a successful close. Last year, the slopes were open for 66 days to those who chose Kékestető for their skiing enjoyment.

The slopes here are also home to the longest ski path in Hungary, which winds 1.8 kilometers down pine-covered hills, all the way to the Veronika field near the village of Mátraháza. Thanks to its gradual incline, the mountain is popular among families and beginner skiers alike. On its upper reaches, Kékestető is home to ski lifts as well. The area has a true alpine atmosphere as well, thanks to the pine forest that surrounds the slopes and the “hut”, which, with an outdoor terrace, serves tea and mulled wine to visitors. Snow machines provide additional snow when necessary, guaranteeing the slopes’ uniform quality throughout the season. The entire ski area is equipped with sound systems and lighting, allowing for night-time skiing as well. For beginner skiers, equipment rental services and ski lessons are available as well.

The closest ski resort to Budapest is found at Dobogókő, the highest point in the Danube bend. A great spot for skiers and snowboarders, this was this was the first ski resort of post WWI Hungary at its founding in 1923. The starting point of the ski routes is just a few steps from the Zsindelyes Inn, planned by famed Hungarian architect Imre Makovecz. At the inn, you can relax and eat after a long day of skiing, or warm up next to its roaring fireplace.

When there is adequate snowfall, the slopes are open all day, while lifts await to bring skiers to the peak. In addition, Dobogókő has great skiing for beginners as well. While you unfortunately can’t take sleds up the ski slopes, unlike the rest of Hungary’s ski resorts, there is a separate slope set aside for sledding. In addition, there’s enough snow, you can ski through the woods all the way to the Pilisszentkeresz bus stop. 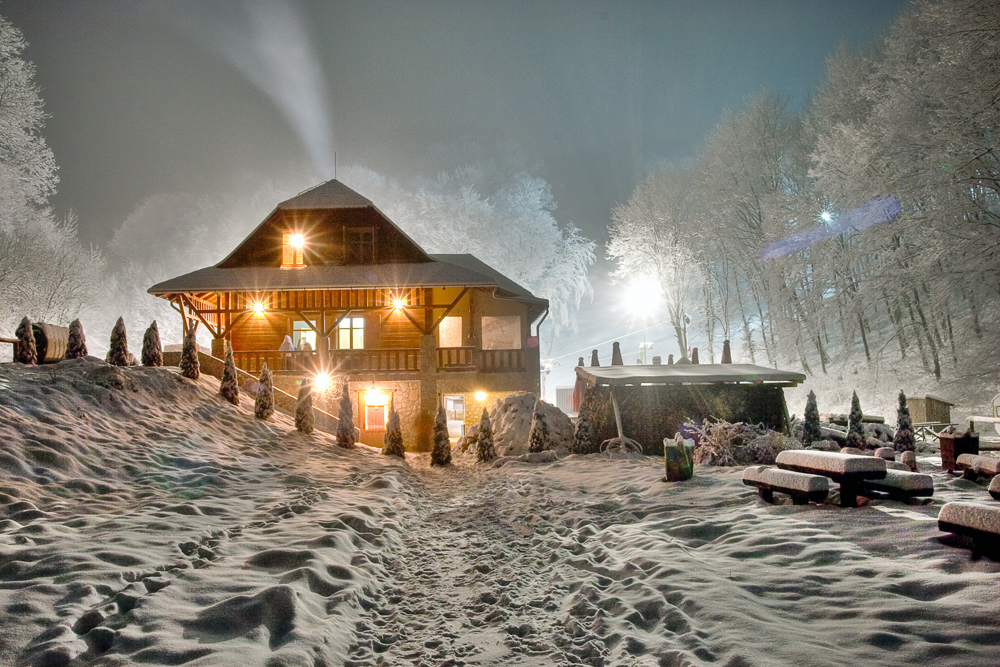 A ski lodge at the Eplény Ski Resort near Lake Balaton (Photo: veszprem.varosom.hu)

The Eplény Ski Arena is Hungary’s most modern and popular ski center. It is located 120 kilometers from Budapest and 15 kilometers away from Veszprém, in the Bakony Mountains. Visitors can ski down 16 separate slopes that total 8 kilometers in length. In addition, the Ski arena is home to Hungary’s longest single downhill ski slope, whose 1927 meters are perfect for beginners and families alike. In addition, 4 kilometers of Eplény’s slopes are also open for night-time skiing. A ‘snow park’ has also been set up, complete with jumps and obstacles, for fans of freestyling. In addition, this season sees the official opening of the resort’s newest, family friendly course.  Snow machines capable of producing 600 cubic meters of fluffy white stuff per hour ensure a lengthy skiing season. For beginners and those without skiing equipment, Eplény (which officially opened to the public yesterday) offers ski and snowboard classes, as well as equipment rental.

Located in the Bükk National Parks, one of the most beautiful parts of Northern Hungary, the Bánkút ski resort is located at 800-970 meters above sea level. The resort has six slopes of varying difficulty, and two learning slopes, which you can reach via 8 ski lifts, and they offer night-time skiing as well. If there is enough snow, you can travel along two cross-country paths, which are 8 and 3.5 kilometers-long, respectively. This year, Bánkút had its first snow in the middle of November, meaning that they expect a good season.

Located next to the town of Sátoraljaújhely, the ski slopes atop Magashegy have welcomed visitors for decades. In the past, pioneer (Communist youth) ‘Olympic’ games were held hear, as were alpine skiing races. Today, Magashegy is home to Hungary’s longest and widest plastic-covered ski slope, which means that it is open year-round. In winter, 9 snow machines ensure a uniform surface over a 600 meter area. The unique feature of this ski resort is that Hungary’s first and only ski museum can be found here as well. Alongside the museum, the complex also offers night-time skiing, equipment rental, ski classes, and a 1000-square-meter ice-skating rink. Getting up to the slopes is made easy thanks to Hungary’s longest chairlift. Over its nearly 1.5 kilometer length, this chairlift takes passengers up to 250-480 meters.

The ski resort at Nagy-Hideg Hegy (literal translation: “Big-Cold Mountain”) is located 60 kilometers away from Budapest in the heart of the Börzsöny mountains. It is Hungary’s biggest ski resort, with lifts that gain 220 meters in altitude. For more experienced skiers, the north side of the mountain is home to a 1.3-kilometer black slope and a 1.6-kilometer red slope, while on the southern side you can find slopes perfect for beginners, families, and younger children. When there is enough snow, you can even travel along an 8-kilometer cross-country ski path.

One of Hungary’s most beautiful ski resorts is located in the Visegrád Mountains. From its peak, there are beautiful views of the upper castle of Visegrád and the bend of the Danube River. Thanks to the resort’s grassy slopes, even a relatively small amount of snow makes them good for skiing. Thanks to their shallow incline, the slopes here are particularly popular among beginners.

The Mátraszentistván resort is located just over 100 kilometers from Budapest in the Upper Mátra Mountains, among Hungary’s highest mountain villages. Just 6 kilometers away from the town of Gályatető, the ski area sits next to the Három Falu Church. Its six slopes have a total length of 4000 meters. The Mátra panorama, with mountains, bridges, log cabins, and small lakes all make skiing here a truly magical experience.

Depending on the weather, the resort is open 50-90 days each year, while artificial snow means that you can ski and snowboard here until the middle of March. As at other resorts, multiple slopes are lit for night-time skiing. The resort is also home to one of the steepest ski slopes in the Mátra Mountains. When the weather is clear, you can see all the way to the snow-capped peaks of the Tátra Mountains in Slovakia. 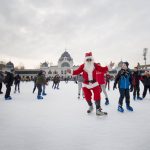