This Week in the Magyar Kupa: Újpest’s 1-0 win over Vasas not enough to overcome 2-1 aggregate deficit 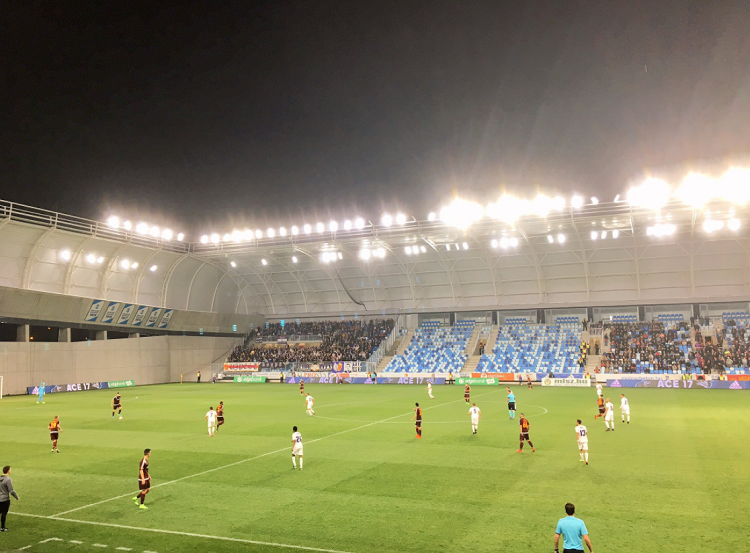 While Hungary’s top flight football teams compete in the NB1, clubs from all flights are invited to compete in the Magyar Kupa (“Hungarian Cup” in English). Cup results are determined by an aggregate of the goals scored in two matches between the clubs.

This week’s featured match, reported on by Hungary Today’s Charles D. Dunst, was the the clash between top-flight Vasas and Újpest. Played on April 5th at Hidegkuti Nándor Stadion, this match was technically a Vasas home game, meaning that the crowd largely featured the club’s supporters. Both team’s fanatics — particularly those of Újpest — turned out in significant numbers. These fanatics overwhelmed the stadium with noise in the form of drums and chants. While the “hooligans” are segregated to their own respective sections, fans of both clubs on the opposite side of the stadium stood most of the game, chanting along with their comrades across the pitch.

Újpest entered the match down 2-1 on aggregate – a deficit even further complicated by Vasas’ two away goals. In order to advance, Újpest therefore needed to win by at least two goals, as if the aggregate score is tied, Vasas will move onto the semifinals due to their advantage in away goals.

These two clubs therefore entered the match with diametrically opposed rationales. While Vasas was content to sit on the ball and attempt to coast to a 2-1 aggregate victory, Újpest pushed the tempo from the start. Through the first 10 minutes, however, neither club had managed a shot, let alone a shot on goal.

The first real opportunity came in the 18th minute, when Vasas’ shot on goal just barely missed net. Újpest goalie Zoltán Kovacs severely misplayed the ball, letting it drift through his hands. Luckily for Újpest, however, the shot painlessly rattled off the post, thereby avoiding early misery. Újpest quickly responded, charging down the field. Enis Bardhi was quickly gifted a near-empty net attempt – although his 11-meter attempt slid harmlessly to the backstop.

Mohamed Remili won Vasas a 25th minute corner kick with his nifty footwork, although the eventual attempt into the box was quickly repudiated as well. Újpest’s Dávid Mohl responded with his own attempt, coming at the net from 28 meters away. This shot was easily stopped by Vasas keeper Gergely Nagy.

Újpest opted to make an early substitution in the 30th minute, replacing János Lázok with Balázs Balogh. The boys in lilac continued to attack, leading an unfruitful frenzy in front of the net. Soon after, in the 32nd minute, Újpest secured their first true chance, with Enis Bardhi having a 14-meter, one-on-one opportunity in front of Vasas’ net. Despite the favorable chance, Bardhi’s attempt was poor and therefore easily saved.

Újpest finally broke through right before the first half whistle, with Striker Nemanja Andrić heading in a 46th minute goal, sending the lilac faithful into delirium. This goal was massive, as Újpest now only needed a sole second half goal – along with a defensive shutout – in order to advance to the semifinals.

The second half began rather sluggishly, with Vasas’ Balint Gaal receiving a 49th minute yellow card for a simple trip. Soon after the card was delivered, Újpest – both sensing the weakness of their opponent as well as their own need for a goal – began pushing the tempo once again. The boys in lilac soon after appeared to have another goal set up, but in the 54th minute, Enis Bardhi was called offsides on what promised to be a one-on-one opportunity with the keeper. 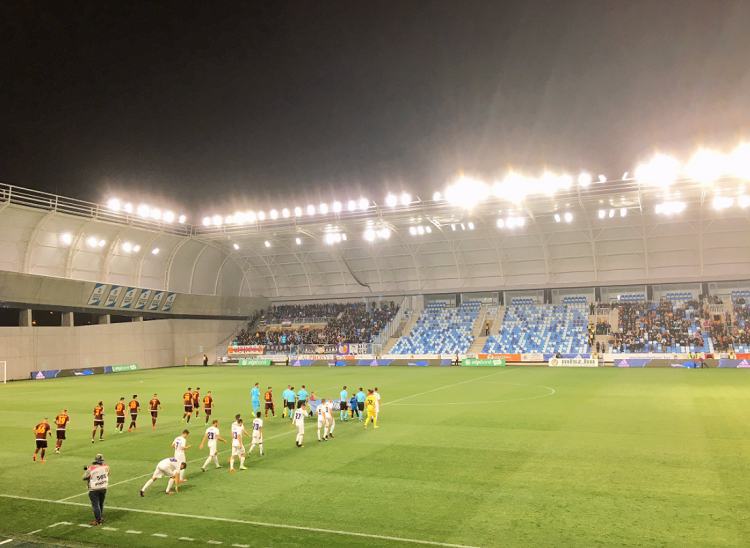 In the 56th minute, previous Újpest goalscorer Nemanja Andrić came close to securing his second and adding to the advantage. Shooting off of a deflection, Andrić’s attempt slid past the outstretched arms of the keeper; albeit past the goal as well. Despite Újpest’s increased intensity – which was noticed and matched by their supporters – their advantage remained at one goal; not enough to secure a spot in the semifinals.

Vasas opted to utilize their first substitution in the 61st minute, replacing Benedek Murka with Matthew Vida. In the 65th minute, Vasas once again came inches away from scoring, as a deep attempt bounced off the post. Just as in the 18th minute, Újpest keeper Zoltán Kovacs misplayed the ball; nearly resulting in heartbreak for lilac. Vasas’ James Manjrekar received a yellow card a minute later.

Újpest, needing a goal in the final 20 minutes, continued to push the pace of play, resulting in a 69th minute corner kick which was handled cleanly by Vasas keeper Gergely Nagy. Late in the 70th minute, Újpest secured another corner kick off a deflected shot from Balász Balogh. Much like the previous attempt, Nagy handled it with ease, thereby maintaining Vasas’ spot in the semifinals.

Due to a questionable foul call, Újpest was gifted a 73rd minute free kick – a call which angered the largely Vasas-supporting crowd. On this free kick, Bardhi lofted a beautiful ball into the box. Although Balogh got a head on the ball, the attempt was a few feet wide of the net. Soon after, in the 75th minute, Újpest replaced Bardhi with substitute Kristof Szucs.

In the 77th minute, Újpest’s Andrić got an incredible look on goal off a beautiful through ball. His shot was once again handled cleanly by Nagy. Just about a minute later, Vasas had a similarly enticing look on net, as Újpest keeper Kovacs had to make a diving save to secure the current scoreline. Andrić was substituted out in the 80th minute, as he was replaced by Bojan Sankovic.

Vasas’ next opportunity came on a free kick, which they received from Jonathan Steve Heris being given an 81st minute yellow card. The club failed to convert however, as Kovacs easily handled Mohamed Remili’s high-lofting ball. With 9 minutes left – and Újpest needing a goal – the intensity increased noticeably both on the field and in the crowd.

Újpest came incredibly close to scoring its much-needed goal in the 86th minute, as Souleymane Diarra lofted a beautiful ball into the box. Although József Windecker was there to get on it, Nagy saved it at the last second. This push from the boys in lilac was followed by a string of unfruitful corner kicks. In the 88th minute, Nagy came slightly too far off of his line, allowing for a relatively empty net. Although Windecker was once again able to get a foot on it, his shot was a few feet over the crossbar.

For the remaining time, Újpest continued to push towards the net – while their fans proceeded to get even louder. In the 90th minute, Vasas opted to replace Márk Kleisz with Ádam Martin. The Vasas faithful, sensing their impending aggregate victory, began to erupt in jubilance. As the final whistle sounded, this jubilance only increased, with fans throughout the stadium cheering on their victors, as Vasas had won the contest, advancing on away goals despite the 2-2 tie. The Vasas players, recognizing their hard-fought victory, soon ran over to their faithful hooligans to celebrate, dancing and chanting for the next few minutes.

For Újpest, the defeat likely marks the end of their competitive season, as they currently sit at 8th in the NBI. Vasas, on the other hand, currently sits at 3rd in the league. Újpest’s disappointment was noticeable on the field, as many players collapsed to the crowd. Despite the loss, the segregated Újpest hooligans continued chanting “Újpest, Újpest, Újpest!” as a thank you to their beloved warriors – affection which was soon reciprocated by the Újpest players themselves.

On the same day, Mezőkövesd-Zsóry – up 3-1 on aggregate — took on Szolnoki MÁV, defeating them 4-3, therefore advancing to the Semifinals on a 7-4 advantage. Although Szolnoki’s Tamás Hajba struck first, Mezőkövesd’s Ulysse Diallo responded with a goal of his own. While this back and forth continued essentially throughout the entire match, Mezőkövesd emerged successful, thanks to goals from Roland Baracskai, Marek Střeštík, and Gábor Molnár. Nikola Pantović and Péter Berdó each added goals for Szolnoki.

Earlier in the day, Soproni VSE and Budafoki MTE squared off in a matchup of second-flight clubs. Soproni entered the match with a 2-1 advantage. Budafoki, however, came out strong, with Dávivd Kovács slotting in an 8th minute goal. The club kept up the intensity, as Csaba Csizmadia added another goal to put Budafoki up 2-0. Despite a final push from the hometown Soproni, Budafoki managed to escape with a 2-0 victory; 3-2 on aggregate. The second-flight Budafoki MTE therefore secured a spot in the semifinals.

On April 4th, Ferencváros – up 2-1 on aggregate – traveled to Városi Stadion to take on Diósgyőr. Although this was a matchup of top-flight clubs, neither side could convert. Ferencváros therefore advanced to the semifinals, based on their one goal advantage.

The semifinal teams, therefore, are Ferencváros, Vasas, Budafoki MTE, and Mezőkövesd-Zsóry. The official matchups have yet to be released.

Reporting and Photos by Charles Dunst 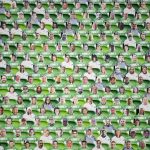 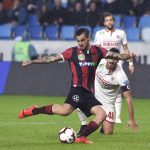