He’s tired. Not surprising, considering barely a day has passed since he performed as speaker at a charity concert, alongside hundreds of children on stage and thousands in the audience. We can’t walk 15 meters down the street without a request for an autograph, handshake, or a hug. He only appears tired from the outside though, his boundless patience and love still radiates from him. He smiles as he speaks of the Saint Francis Foundation of Déva’s 25 year history, and the thousands of children he has created a home for. Our sister site, Ungarn Heute’s interview with Csaba Böjte, Franciscan brother.

Hungarian and world celebrities usually preform at Arena. The day after the charity concert, newspapers were describing your performance as speaker on par with that of an Academy Award host. Did you not have stage fright?

If you’ve been practicing speaking in front of 300-400 children for 25 years, then 100,000 adults –who are much more well-behaved—are not so daunting. I am overjoyed to bear witness to our Lord, to love, and to all that which I have experienced among children.

Yet it is quite rare that the public should pay such close attention to a catholic brother, like yourself. For this reason, many name you a “celebrity priest”. Is it a difficult role?

The function of a seeder is not what we view it as, but rather what we can grow from its processes. I think that if I am spreading and planting God’s word, then the goal is not what others may think of me, but rather, that the values which I am trying to impart may take root in the hearts of my listeners. Then, those very roots may grow and evolve so that one may be happier and richer in life. 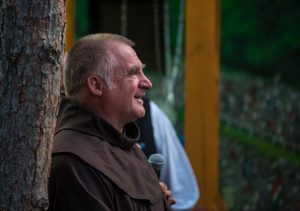 The charity concert was organized with the “Never Give Up” foundation. The main message was that “God does not create rejects”. Who is this message for? For society, which isn’t accepting enough, for politics which doesn’t do enough to help, or for those individuals with disabilities, so that they may be more visible and acknowledged?

When a husband returns home and tells his dear wife: “My dear, I have been waiting to come home all day, I’m so happy you’re here, what a delicious meal you’ve prepared”…He immediately gets a kiss, right? But if he comes home grumbling and cursing, he draws out such a harpy from his wife that they both stare, surprised at each other, how can my sweet little wife be capable of this? Our Lord Jesus Christ gave us one command: to love each other. We often forget this and resort to condemning, criticizing and blaming one other, saying all types of hurtful things. But if we think about it, we cannot be better by beating or criticizing, only by loving each other. The simple villager knows, if he goes out to the planting fields and digs value into the ground, for example fertilizer (“megganézza a földet” as the Szeklers nickname it), and he buries it with determination, the ground may yield all the more bountiful crops. But if all he does is stab the ground with a pitchfork, the earth, and thus the crops, will not improve at all. The first thing small children must learn alongside walking and talking, is that love bears more love – while hatred, anger and yelling produce more of the same; or in other words, you reap what you sow.

“Living with a disability is living with a visible cross” – said a lifelong wheelchair bound young man on the Arena stage. The atheists and skeptics biggest question is this: if there is a God, why does he allow children to suffer? What do you answer to this?

I believe there is no man without a cross. I would instead call this a task which must be completed. Within everyone lies visible and invisible defects, myself included. We must take responsibility for these. The little violet is not jealous of the sunflower’s ability to make such delicious oils, while the sunflower harbors no jealousy of the violet’s lovely perfume. Instead, both produce their own individual flower, petals and fruits. I think that people must accept that they each have their own separate path in life given to them by the Lord. It is true what János Pilinszky once said: “It is beyond expression how great what exists, is. From every roof you can see the sun”. 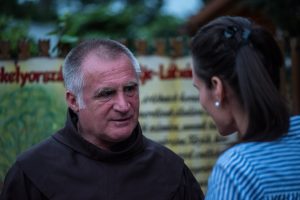 Brother Csaba, you often encourage individuals to dare to have children. Not only Hungary, but all of Europe is struggling with declining birth rates. How can this be changed? Can politics, for instance, have a role in this?

I see that the Hungarian government has put a lot of effort into encouraging having children. It’s pleasing to notice the rate of wanting to have children has risen from 1.25 to 1.50; in other words, it has increased by 0.25 in the past 5-10 years, which is quite an accomplishment. However, I think a marriage needs more than just a car, house and money— first and foremost, it needs love. Therefore, we decided to come up with an educational path to love. We think Sándor Petőfi wrote the most beautiful poems about love. He met Júlia, the love of his life, in Transylvania. He courted her and asked her for her hand in marriage but she rejected him. Why? Because the nation’s poet spoke quite filthily in his soliloquies. This did not sit so well with Júlia. So Petőfi returned home, washed his mouth, rebuffed his vocabulary, went back to Júlia and finally succeeded in wooing her. To this day, the altar and crucifix under which the pair said their vows, still stands in Szatmár. His friend, Count Teleki, invited them to Koltó for their honeymoon. Their educational path to love spanned this distance: from Nagyvárad to Koltó. The goal is to show in 9 points what meeting, courting, proposal, engagement, marriage, and having children signify. We confidently tell the youths what love means in accordance with the long standing, ancient values of Christianity. God willing it succeeds! We warmly welcome everyone here.

Did you ever imagine, when you planned that first camp for orphaned children in Déva, that this would become not just a week-long commitment, but a 25 year (and hopefully longer) endeavor?

I didn’t even think the Romanian authorities would allow this to happen. One thing I’ve learned is to never give up! I will never be the one to say it’s all over. We so easily throw in the towel and leave. On Palm Sunday, Jesus Christ could have said he had enough: I have multiplied bread, worked miracles, you do not want this, it isn’t working, then let’s not force this. But he stayed amongst us. His ascension into Heaven could have been earlier, on Maundy Thursday. It was nice meeting you, goodbye, Heavenly Father blow apart this world because that is all it’s worth. But how incredible that he stayed beside us. Let us stand by our children, colleagues, and husbands as well! We so easily say no to one another. There is so much divorce and so many lonely youths! We have 300 colleagues at the foundation, and I will tell you now, we do not fire anybody. Because, even now, Jesus sits amongst his apostles in Heaven. 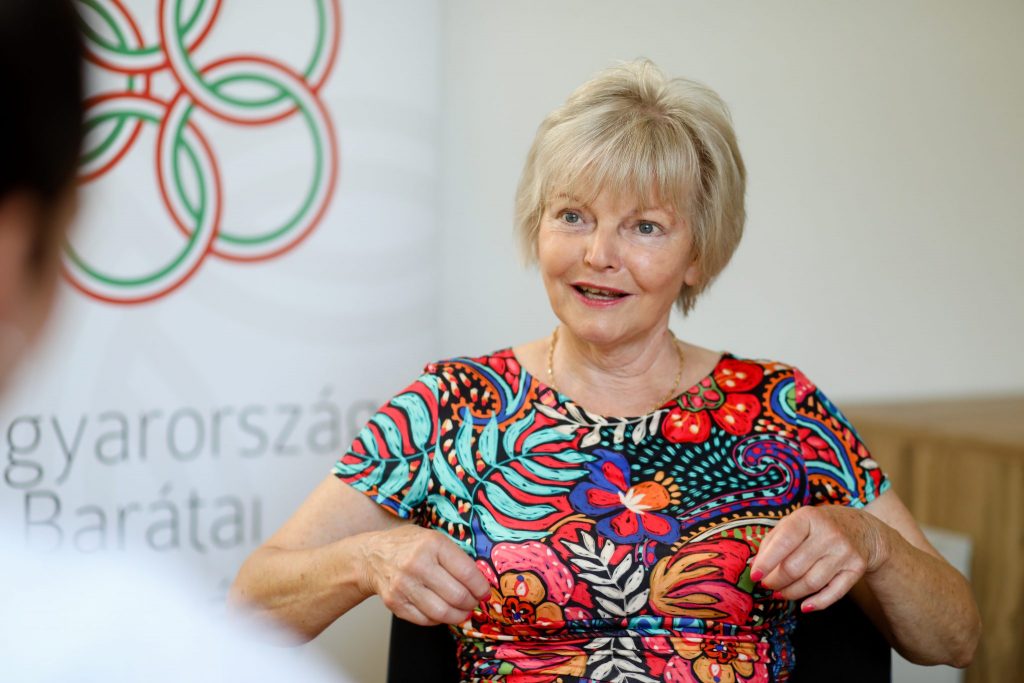 She emigrated to Hamburg in 1979. She says she misses the Hungarian summers the most and it was difficult for her to get used to the rainy weather in North Germany in the beginning. Today she is the leader or important member of several Hungarian organizations in Germany, and for her work, she has received […]
Zsófia Nagy-Vargha 2021.07.11. 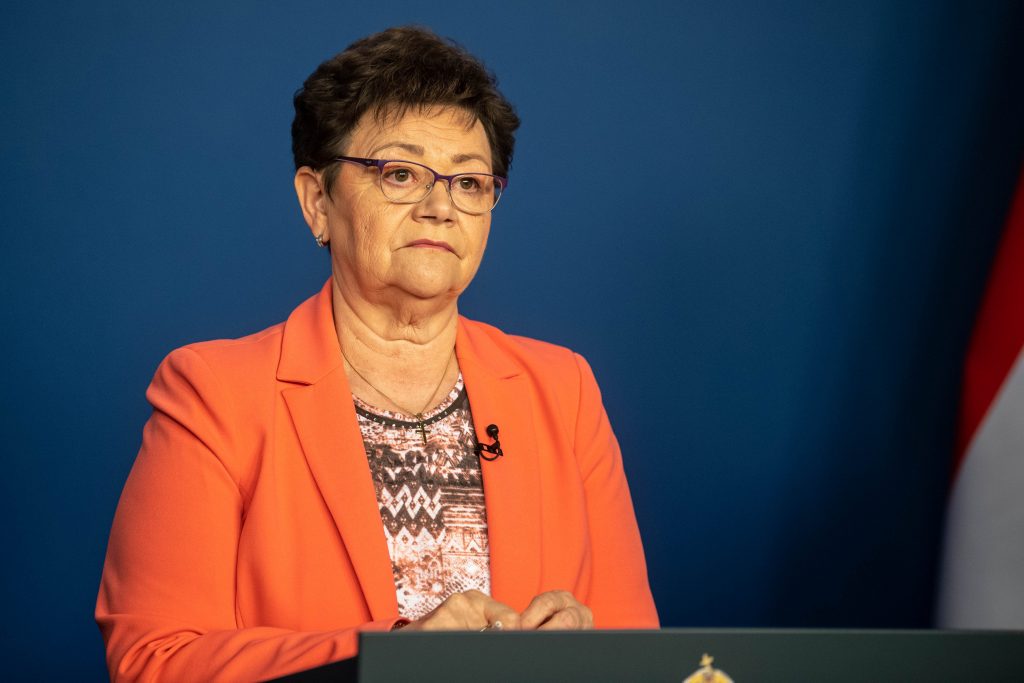 Following that the court first turned away a Christian Democrat (KDNP) MP’s complaint about a caricature that mocks the Coronavirus Operative Board’s press conference while depicting Jesus on the Cross, the second instance ruling found its publisher, left-wing daily Népszava, guilty. A media-focused outlet says the ruling may impose a serious limitation on the future […]
Ábrahám Vass 2021.06.24.