Altogether 12 sportsman may hold the title at all times in Hungary. The title comes with an annuity.

Faragó was awarded the title after the death of Olympic champion water polo player György Kárpáti on June 17. 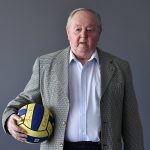