Although his contract would have lasted until the end of the year, new board of trustees leader Attila Vidnyánszky decided to replace University of Theater and Film Arts’ (SZFE) chancellor Lajos Vonderviszt. He named a former defense minister’s chief of staff, Colonel Gábor Szarka for the post. Protesting students, however, faithful to their promise, didn’t let him in the University’s building.

Vonderviszt, appointed by PM Orbán in 2015, tended to be a middle-man between the new board of trustees and the students, giving gestures in both directions and he took part in the hand-over process. Although he didn’t plan to end his contract ahead of time or due to recent events, Attila Vidnyánszky reportedly summoned him into his office, informed him of his decision, and informed him of his successor.

Gábor Szarka, a weapons infantry officer by profession, served as former defense minister Csaba Hende’s chief of staff during Viktor Orbán’s second term. From 2013, he served as military attache at the Hungarian embassy in Paris. At his latest job, he worked as Campus Director at the University of Public Service (NKE).

Protesting SZFE students, however, didn’t let him get into the blockaded building. According to the new foundation’s statement, around a dozen of them prevented the new chancellor from entering the premises.

At the moment, SZFE’s case is still at a stalemate. The blockade has lasted for a month now, and a protesting march on Sunday, organized this time by the students of the Hungarian University of Fine Arts (MKE), gathered thousands once again. Students still want the departure of the new board of trustees and refuse to accept the new form of operation until the government fulfills their demands aimed at guaranteeing SZFE’s autonomy. 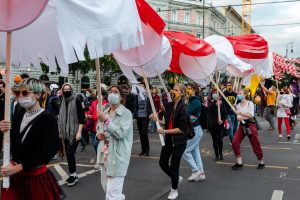 Meanwhile, another nationwide demonstration is scheduled for next Sunday, with organizers inviting those standing by SZFE to participate in a torched relay run to five of Hungary’s university cities.