Hungarian post-Holocaust drama ‘Those Who Remained’ has been included in the International Feature Film category (formerly known as Foreign Language Film) among nine other films advanced to the voting process for the Oscars. Unfortunately, it did not make it into the final five. More than 30,000 people have watched the film – distributed by Budapest Film – in Hungarian cinemas, and the film is still being shown in several movie theaters.

Abigél Szőke is celebrating her 22nd birthday this year, and at the time of the film’s shooting, she was 19. She is currently a student at the University of Theatre and Film Arts. In 2017, she was the leading actress in György Pálfi’s vampire play, Engedj be! (Let me in!), but she also appeared in smaller film roles: in Károly Ujj Mészáros’ X – A rendszerből törölve (X – The Exploited), and in Árpád Sopsits’ Martfűi rém (Strangled). The curious thing about the latter film is that she plays one of the victims of a serial killer played by Károly Hajduk, the leading actor of Those Who Remained.

The post-Holocaust film, directed by Barnabás Tóth, starring Abigél Szőke and Károly Hajduk, is a lyrical story of the healing power of love in the midst of national conflict, loss, and trauma. ‘Those Who Remained’ reveals the healing process of Holocaust survivors through the eyes of a young girl in post-World War II Hungary, as summarized on IMDB (Internet Movie Database).

In honor of the artists, a reception will be held at the Berlin International Film Festival in February, where the talented young filmmakers will have the opportunity to introduce themselves to foreign professionals. Abigél Szőke will participate in the Berlin program with the support of the National Film Institute. 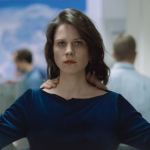