Finance Minister: More than 50,000 with Jobs under New Employment Scheme

More than 50,000 jobseekers and fostered workers have transferred to the primary labor market since last August thanks to a government scheme which has helped to cut unemployment significantly, Mihály Varga, the finance minister, has told MTI.

The project, initially rolled out in 15 counties, will cover the whole country by early 2020, making it easier for companies to increase headcount.

The government’s aim is for everyone able to work to have a job, Varga said, adding that the scheme focused on disadvantaged groups from an employment aspect.

The government’s labour market reform programme bolsters ties between public employment services and businesses to facilitate their access to the workforce, leading to a more effective outsourcing of jobs to the private sector.

Part of the scheme involves screening potential applicants for their skills and abilities with a view to targeting employers more likely to take them on.

The aim is to increase employment among the currently inactive and bring the country closer to full employment, he said.

Since 2010, Varga said, around 500,000 previously inactive workers have been returned to the labour market, with the activity rate rising to 73 percent and the jobless rate steady at around 3 percent. The average job-seeking period has also been reduced, he added. 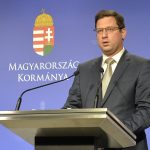