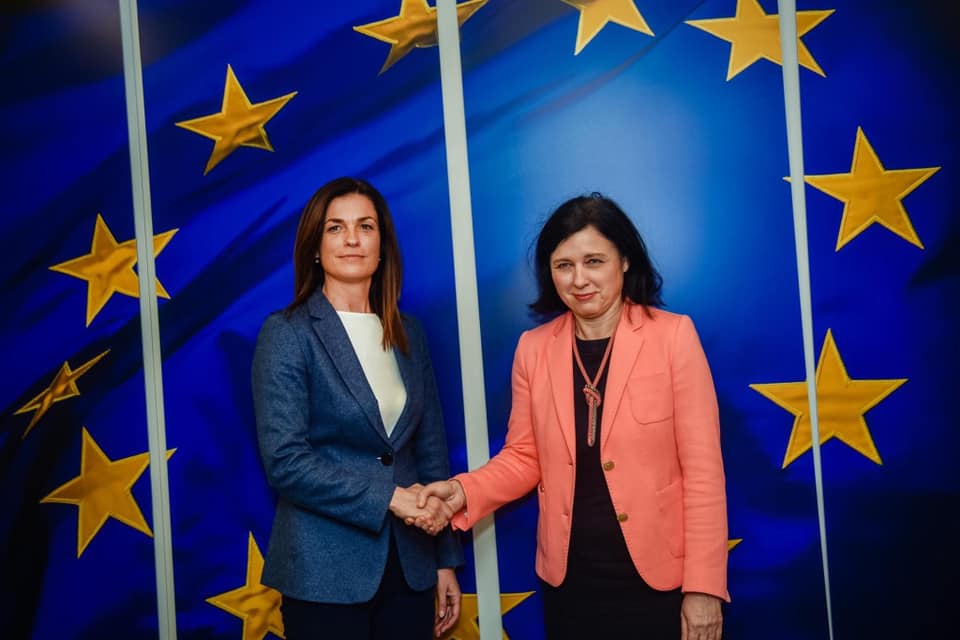 Since the introduction of Hungary’s Epidemic Bill in response to the coronavirus, many spoke out against the Hungarian government and Prime Minister Viktor Orbán, claiming that the bill is granting excessive power to the Orbán administration. The news spread throughout the international media and the European Union, and articles and talks often mentioned the end of democracy and the prosecution of free press in the country. The government said there is “a long list of people” who had levelled accusations against Hungary “without any real argument or legal analysis in the middle of a pandemic.”

To support their argument, in the past few days, many government members, starting with Justice Minister Judit Varga, including Prime Minister Viktor Orbán and PMO Head Gergely Gulyás, cited Vera Jourova confirming that Hungary’s epidemic response law was in compliance with EU laws.

Last week, Justice Minister Judit Varga wrote in an op-ed for Brussels-based news portal Euractiv, in which she also stated that Jourova confirmed last month that the commission had no grounds on which to launch an infringement procedure against Hungary over its epidemic response law. However, the minister added that Jourova’s use of the word “yet” regarding the decision not to take legal action against Hungary made a “mockery” of the principle of the equal treatment of European Union member states.

Justice Minister in Euractiv: Attacks on Hungary ‘work against a strong and unified Europe’

She argued that “the Commission either initiates an infringement procedure or it does not. There is no third way.” The minister added that Hungary was an exception to this because “the presumption of guilt continues to be applied” in its case.

Varga said it had taken “courage” from Jourova “to say no” to legal action against Hungary. “But some just refuse to take no for an answer,” Varga said in reference to those who had “built the image of an enemy out of Hungary,” claiming that it did not respect the bloc’s fundamental rights.

However, in an interview with Frankfurter Allgemeine Zeitung, Vera Jourova corrected the Prime Minister’s statement and stressed that in Brussels they are vigilant about what Orbán and his government are doing in Hungary, concerning the rule of law. According to the Vice-President of the European Commission, although the Hungarian Government emphasized it in recent weeks, she has never said that the Hungarian Authorization Law (or “coronavirus law”) does not infringe community law.

According to Jourova, the emergency grants governments some extraordinary powers, but that doesn’t mean that the Constitution and European laws are “turned off,” and parliaments and the media silenced. He said all measures would be examined to see if they were necessary, relevant, proportionate, and limited in time – moreover, they are continuously observing them, in practical application as well.

She added that if we look at what has happened in Hungary so far, the legislation is very disturbing. After all, there are systemic changes in Hungarian politics that have led to the “unlimited power” of Fidesz and Viktor Orbán- the press is being curbed and it puts tremendous pressure on journalists to be given five years in prison if they publish the facts in a “distorted” way. She emphasized that Brussels was particularly vigilant in the case of Hungary and reiterated that there is no legal basis for initiating infringement proceedings yet, adding that she was emphasizing “yet.”

Yesterday, Minister Varga posted on Facebook that “the cat is out of the bag again.” She said that for a few weeks it seemed that “Vera Jourova was dealing with the Hungarian legislation using the independence expected from the European Commission. For a few moments, this caused some paralysis for the liberals, as they did not know what to do with the statement from Brussels that the Hungarian lex-COVID did not violate EU law and there was no need for EU action against Hungary.”

However, she said that as this new voice and “seemingly impartial process” was too much to “tolerate,” they put pressure on the main actors, the first result of which was Jourova’s interview in FAZ. Varga added that “perhaps I do not need to quote for the people in Hungary the Vice-President’s surreal sentences that the media is being paralyzed in Hungary, and that the new criminal law clause on scaremongering is threatening journalists with five years in prison, for whom this is huge psychological pressure.”

She said that on the other hand, Jourova states that she is maintaining contact with Hungarian journalists and NGOs to follow the situation in Hungary and can only encourage journalists to take legal action if they are accused. Varga asked in the post “how can she get well-founded information about the situation in Hungary from her “contacts” if the atmosphere in Hungary is so scary that freedom of expression cannot even exist.”