The American-Canadian production Pieces of a Woman is based on the screenplay by Kata Wéber and features a star-studded cast, including Shia LeBeouf, Vanessa Kirby, Ellen Burstyn, and Sarah Snook. The seventh feature film by Kornél Mundruczó, world-renowned for his film and theater work, is set in Boston and follows the story of a mother who has lost her child after an ill-fated home birth. According to Kornél Mundruczó and his co-creator, Kata Wéber, this is their most personal film to date, as it was inspired by the grief the director and his screenwriter partner suffered when they lost their own child.

In October 2019, it was announced that Vanessa Kirby, who played Princess Margaret in the series The Crown, and Shia LaBeouf had joined the cast of the film. According to the latest information, the cast of Pieces of a Woman is developing promisingly. Ellen Burstyn (Card Castle, Louie) have been cast as well, and Succession‘s actress Sarah Snook and Benny Safdie, a well-known director-writer for Good Time and Uncut Gems have also joined the cast. The film’s executive producer is Martin Scorsese.

Pieces of a Woman was included in the official competition program of the 77th Venice International Film Festival, where leading actress Vanessa Kirby won the Best Actress award. Kirby said she “threw herself really deep” into her first lead role in a movie, which opens with a 25 minutes long childbirth scene. She admitted trying to be true to the suffering of the women she talked to before the shoot was “really scary”, and she named and thanked them and their lost children in her acceptance speech. A day earlier, the film also received the Arca Cinema Giovani Award (Young Cinema Award) for Best Film from a jury of 30 young students, and the film received mostly positive reviews.

This is by no means Mundruczó’s first movie to make a splash on the international scene; as mentioned in several reviews, his last film, White God, won the Prize Un Certain Regard at the 2014 Cannes Festival and the Octopus d’Or at the Strasbourg European Fantastic Film Festival. In addition, while it was not ultimately nominated, White God was Hungary’s entry for Best Foreign Language Film at the 2015 Academy Awards. Jupiter’s Moon (Jupiter Holdja), premiered at the Cannes Film Festival. The film has garnered a huge reaction from the international press, with reviews from multiple prestigious media outlets.

featured photo: Vanessa Kirby in ‘Pieces of a Woman’, via the production 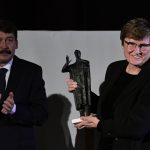