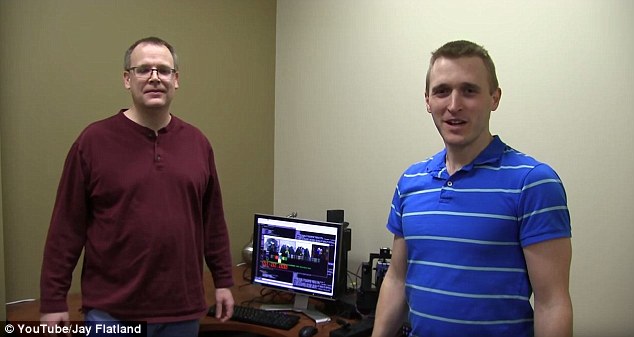 Two software engineers from the United States have showed off their robot earlier this month that can solve a Rubik’s cube in just a little over one second.

Software engineers Jay Flatland and Paul Rose from Kansas, Missouri, uploaded a video to YouTube this month of the super bot successfully unscrambling the cube in just 1.047 seconds.

The Guinness World Record for fastest time to solve a Rubik’s cube is held by an Florida student’s robot, which solved the puzzle in 2.39 seconds in November. Mr. Flatland and Mr. Rose’s machine was built by plugging separate motors supported by a 3D-printed frame into drilled holes in a Rubik’s Cube.

The information is then fed through an implementation of the Kociemba Rubik’s cube solving algorithm, which determines which moves need to occur for the cube to be solved quickly.

When Mr. Flatland scrambles the cube in the video and puts it into the machine, which solves it in 1.047 seconds.

The men’s video has been watched on YouTube a whopping 1 534 000 times on YouTube since being uploaded on 11 January.

The three-dimensional logical game was invented by Hungarian designer and university lecturer Ernő Rubik – whom it takes an average of one minuten to solve the cube – in 1974. It proceeded to win a number of international prizes and 350 million examples have been sold internationally.

The cube’s importance in pop culture is well demonstrated by its appearance in the opening scene of the British cult series This Is England in the company of other objects typical of the period.