US Congressmen Visit Budapest, Claim Trump-Orbán Meeting “Is Only a Matter of Time” 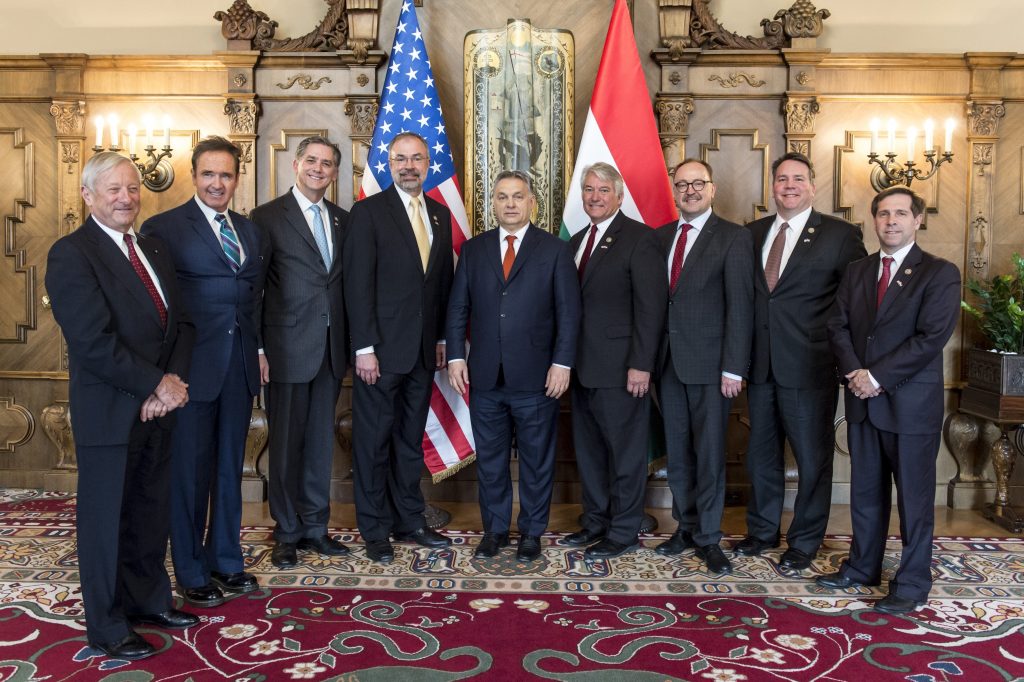 Last Friday, a delegation of six members of the United States House of Representatives paid a visit to Budapest. While in the Hungarian capital, they met Prime Minister Viktor Orbán, Speaker of the House László Kövér, Human Resources Minister Zoltán Balog, Interior Minister Sándor Pintér, and Zsolt Németh, head of parliament’s foreign affairs committee and of the Hungary-US friendship section. 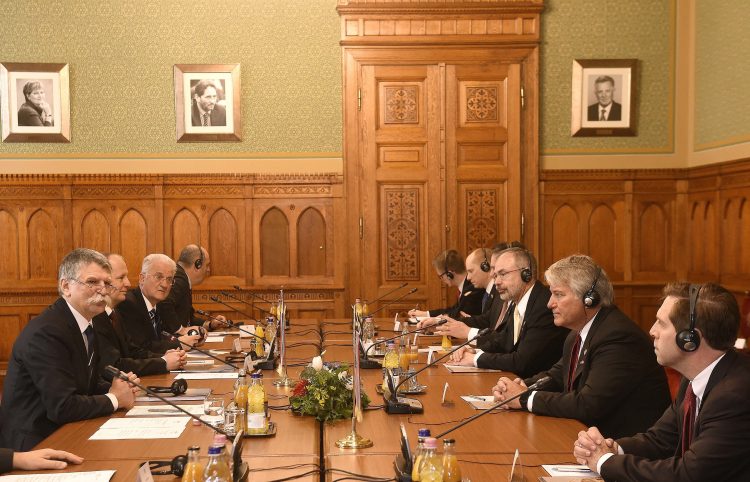 Speaker of the Hungarian National Assembly László Kövér (left) meeting with a delegation of members of the United States House of Representatives in the Hungarian Parliament, March 9th, 2018 (Photo: MTI – Noémi Bruzák)

Hungary and the United States have a vested interest in developing bilateral relations along common values and promoting a better understanding between the two countries.

The Fidesz politician told the Congressmen that Hungary strives to boost political, economic, cultural and tourism ties and develop the traditionally strong military and security policy relations between the two countries. 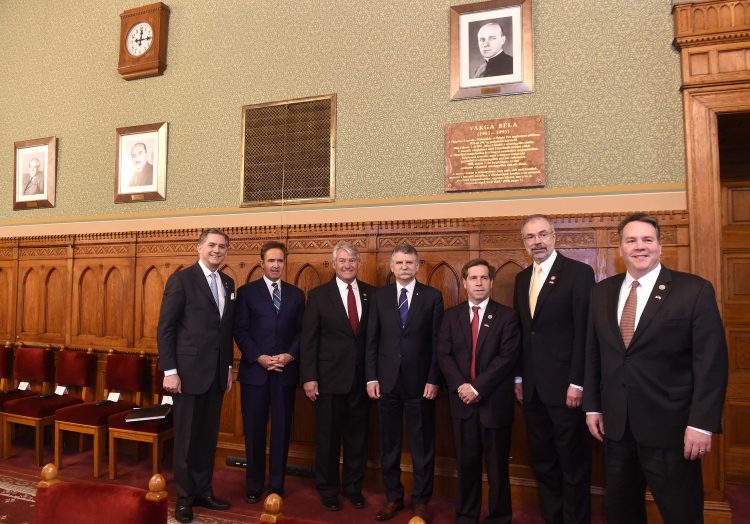 Speaker László Kövér (fourth from the left) posing for a photo with a delegation from the US House of Representatives, led by Republican Dennis Ross (third from the left), March 9th (Photo: MTI – Noémi Bruzák)

The two sides exchanged views on the future of the European Union, the ways to manage the European migration crisis, V4 cooperation, the Ukrainian education law that limits the language rights of the ethnic Hungarian community, Hungarian-Russian relations, and Hungary’s efforts to eliminate its unilateral dependence on energy imports.

Ross, the head of the US delegation, confirmed his strong commitment to developing closer ties between the two countries.

Talks with Németh on Security and Migration

In addition to their talk with Kövér, the US delegation also met with MP Zsolt Németh, head of parliament’s foreign affairs committee, who told a press conference that

The Fidesz lawmaker claimed that global and internal security and migration policy are in the foreground of those relations. In his telling, Hungary and the Trump administration, which relies on Republican majorities in both the House of Representatives and the Senate, “have similar views on social policy and the importance of Christian values and the family.”

He called for deepening top-level political relations, as well as economic and security cooperation.

“Building central Europe” is a priority for Hungarian foreign policy, Németh said, claiming that US President Donald Trump’s visit to Warsaw last year was an important event from this aspect, too. The right-wing MP argued that Trump’s speech had been a strong stance for traditional values, “for God, homeland, family and freedom.”

A rising central Europe is the common interest for all who see the region’s potential, the US among them, he said.

Ukraine was another topic discussed. In this field, Németh argued that Hungary sees that country’s future place in Central Europe, and fully supports Ukraine’s territorial sovereignty and integrity, he said.

Moving to the Orbán government’s ongoing diplomatic dispute with the country over its controversial education law, Németh said that Hungary also wants to see Ukraine “build a democratic state based on the rule of law”, where human and minority rights are observed, and Transcarpathian Hungarians can preserve their school system. 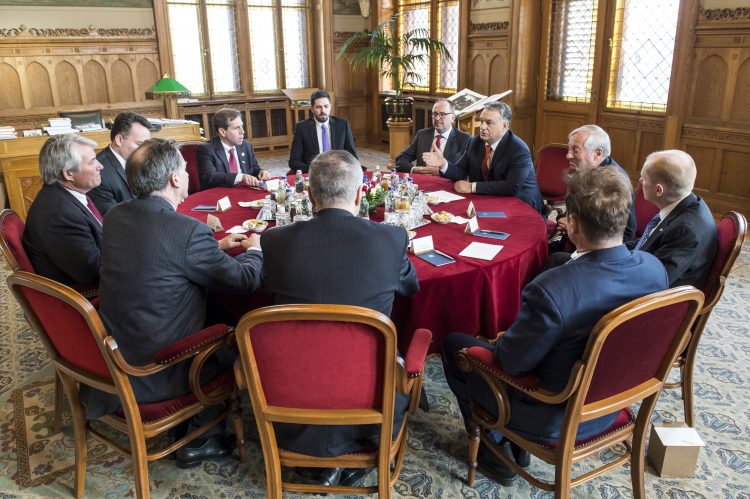 Discussing his meetings, Congressman Ross said that the US is willing to help Hungary diversify its energy supplies. The Hungarian economy is performing very well, and this provides opportunities for strengthening bilateral economic cooperation, he said. Ross added that the talks also touched on Russian influence and cybersecurity.

Asked about a meeting between Prime Minister Viktor Orbán and President Trump, Ross said that they were

working on setting it up…It is a matter of time.

While Fidesz lawmakers and Congressman Ross both emphasized the positive, productive nature of Hungary’s relationship with the United States, the two countries have had a number of diplomatic disputes even since the election of Donald Trump in November of 2016.

In the past year, the US Embassy in Budapest, led by Chagé d’Affaires David Kostelancik (a career diplomat), has been vocally critical of many of the Orbán governments more controversial actions, such as its  “Lex CEU” higher education amendment legislation, which critics say is aimed at making the Central European University’s continued existence in Budapest impossible. Another point of contention has been the government’s  law requiring civil groups  receiving foreign donations above a certain threshold to register as organizations funded from abroad. Responding to the legislation, the US government expressed concern, writing that the law “unfairly burdens and targets Hungarian civil society, which is working to fight corruption and protect civil liberties.” In addition, the State Department expressed its view that the NGO legislation is “another step away from Hungary’s commitments to uphold the principles and values that are central to the EU and NATO.”

While many Hungarian government officials, particularly Foreign Minister Péter Szijjártó, have been effusive in their praise of Trump, others, such as President of the Republic János Áder, have criticized the American leader for his plans to withdraw the US from the Paris Climate Agreement. Likewise, while numerous observers initially held out hope that Orbán’s early embrace of Trump would lead to a vast improvement in US-Hungarian relations (and perhaps even an invitation to the White House), up to this point such an invitation has yet to materialize.