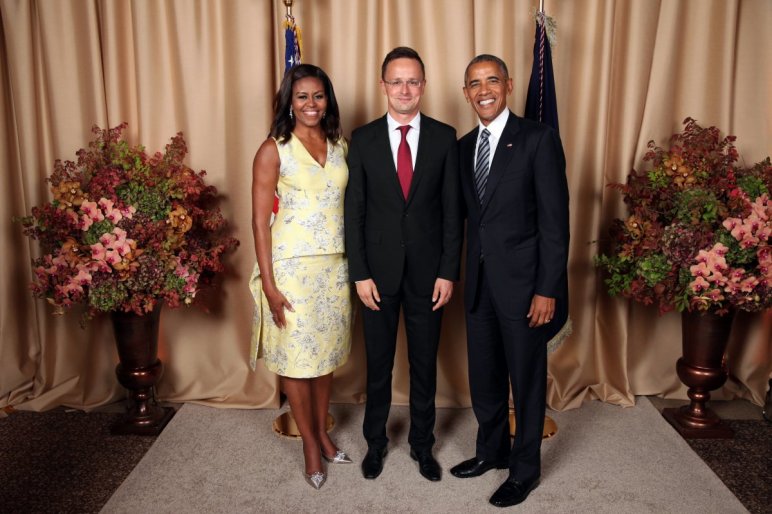 Hungary’s Foreign Minister has had a busy schedule in New York in recent days. While on Monday Péter Szijjártó presented Hungary’s six-point proposal on how to handle the migration crisis at the migration summit of the United Nations, on Tuesday and Wednesday he held more than a dozen bilateral talks focusing on diplomatic and economic issues. On the sidelines of the UN General Assembly session, Mr Szijjártó has even met with US President Barack Obama and First Lady Michelle Obama. (picture above)

Péter Szijjártó emphasized in New York that central or eastern Europe had not delegated a UN secretary-general in the past 70 years. That region is “extremely sensitive” in terms of the war in Ukraine, energy security challenges, tension in the Western Balkans, relations between Russia and the European Union, and “a number of sensitive issues which, it seems, our western European or trans-Atlantic friends my not comprehend in their entirety,” he said. “Therefore it is a very important interest that the UN should at last have a secretary-general from this region”, he said. Such a candidate, aware of problems of the region and familiar with the attitude of its people, could be instrumental in improving the situation in central Europe and easing its conflicts and tensions, the foreign minister insisted.

As for the several bilateral meetings, Péter Szijjártó said he held talks with counterparts mostly on the migrant crisis and economic cooperation in New York. Concerning his talks with the Australian foreign minister Julie Bishop, Szijjártó said that both Hungary and Australia give priority to border protection and national sovereignty, and agree on the need to prevent migrants from abusing the law. “Australia has tightened border control and its relevant laws, triggering base attacks and critical remarks similar to those Hungary is exposed to,” he said.

Hungary’s Péter Szijjártó and the Lebanese foreign minister Gibran Bassil agreed that refugees should be helped to survive the hard times in countries and regions close to their homes before returning to their native lands as soon as possible. They also agreed that the international community should grant more assistance to Turkey, Jordan, Lebanon and the autonomous Iraqi Kurdistan, which play the lion’s share in mitigating the migrant crisis. Szijjártó noted that Hungary had contributed 3 million euros to the Madad Fund set up by the European Union to ease the plight of refugees in Syria and its neighbourhood.

At bilateral talks with Fiji’s prime minister Josaia Voreqe Bainimarama, Szijjártó discussed economic issues and strengthening cooperation between the Pacific region and the European Union. At the same time, Péter Szijjártó and his Colombian counterpart Maria Angela Holguin Cuellar discussed new opportunities arising from Colombia’s economic diversification. “The free trade agreement between the EU, Colombia and Peru open up new opportunities for the Hungarian economy as well,” Szijjártó said. Szijjártó agreed with Cuellar on reopening Hungary’s embassy in Bogota in the summer of 2017.

The Hungarian Foreign Minister participated in four bilateral meetings with African counterparts, with the aim of boosting economic ties with African countries. “There is a shared view that Africa is the future and it is in Hungary’s interest to utilise the advantages of Africa’s development,” Szijjártó said after meetings with Algerian Foreign Minister Ramtane Lamamra, Tunisian counterpart Khemaies Jhinaoui, Sudanese counterpart Ibrahim Ahmad ‘Abd al-Aziz Ghandour and Foreign Minister of Cape Verde Luis Filipe Tavares. All his partners said that their countries would support Hungary’s candidacy in the UN Human Rights Council in October. “Since Hungary can best succeed if it operates within the framework of the European Union, we are encouraging the EU-Algeria Association Council and the development of strategic partnership between the EU and Tunisia, as well as putting together new EU development funds for Sudan,” Szijjártó said.

During his visit to New York, Péter Szijjártó also met with Guatemalan counterpart Carlos Raul Morales Moscoso and signed an agreement on consultations between their respective ministries and on Hungary offering scholarships to students from Guatemala. At another meeting, Szijjártó assured Kosovo’s Foreign Minister Enver Hoxhaj of Hungary’s continued support for western Balkan integration and allowing Kosovo visafree status. Szijjártó also said that during his next meeting with Perfecto Yasay, the foreign minister of the Philippines, they confirmed an agreement on economic cooperation which will be signed next January.

The Hungarian Foreign Minister also held talks with Amos J. Hochstein, Special Envoy and Coordinator for International Energy Affairs, and with Thorbjorn Jagland, Secretary General of the Council of Europe. Szijjártó and Jagland exchanged views on the refugee crisis, The minister told the Norwegian politician that nobody can take away the democratic right of Hungarians to decide about the most important issues of their country’s future. At the meeting with Hochstein, Péter Szijjártó asked the US to help establish energy security in central Europe, especially by encouraging investment projects, such as the Hungarian-Croatian and Hungarian-Romanian interconnectors.

The head of the Hungarian diplomacy also met representatives of Jewish organisations in New York and assured his negotiating partners that “no national or religious minorities need to be afraid in Hungary”. Following his talks on the sidelines of a UN General Assembly session, Szijjártó told MTI that “Hungary is a Christian state and it has a Christian Democrat government”, adding that Christianity and anti-Semitism are “totally incompatible”. 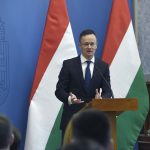