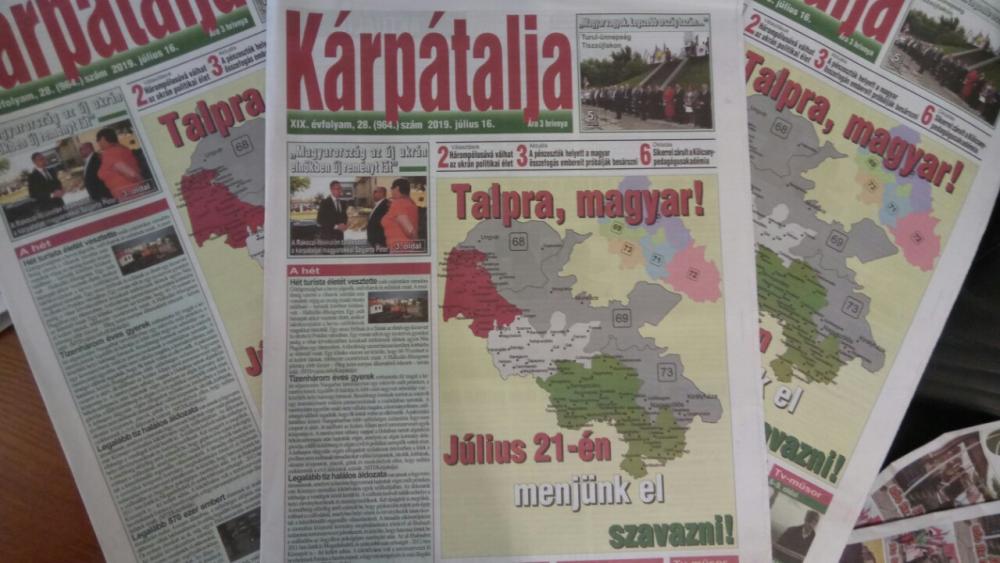 The Ukrainian Ministry of Foreign Affairs turned to the Prosecutor General’s Office and the Ukrainian Security Service (SBU) with a request to initiate proceedings against the Cultural Alliance of Hungarians in Sub-Carpathia (KMKSZ) due to a map illustration in its weekly newspaper Kárpátalja, which depicts part of the Transcarpathian County “as if it belonged to Hungary, ” MTI reports.

In their latest issue, the newspaper attempted to encourage Transcarpathian Hungarians to participate in the Ukranian parliamentary elections held on Sunday, with a map on its front page depicting the Transcarpathian county, where three electoral districts- in which Hungarian candidates were running for office – were colored red, white and green (the colors of the Hungarian flag). The following inscription was written on the map: “On your feet, Hungarians! Let’s vote on July 21st!”

Deputy Foreign Minister Jevhen Bozsok wrote on Twitter on Thursday, “This is separatism! The Ukrainian Prosecutor General’s Office and the Ukrainian Security Service must initiate proceedings against it. I have already signed the relevant appeals.”

In response, the Ukrainian Security Service announced that it has launched proceedings, “given that the representation of the newspaper’s map with the Hungarian flag in the background shows signs of an attack on Ukrainian territorial integrity and provokes separatist feelings among the Hungarian national minority.”

This incident comes not long after a much-debated language law meant to safeguard the primary use of the Ukrainian language was passed. The law severely discriminates against different ethnic minorities living in the country.