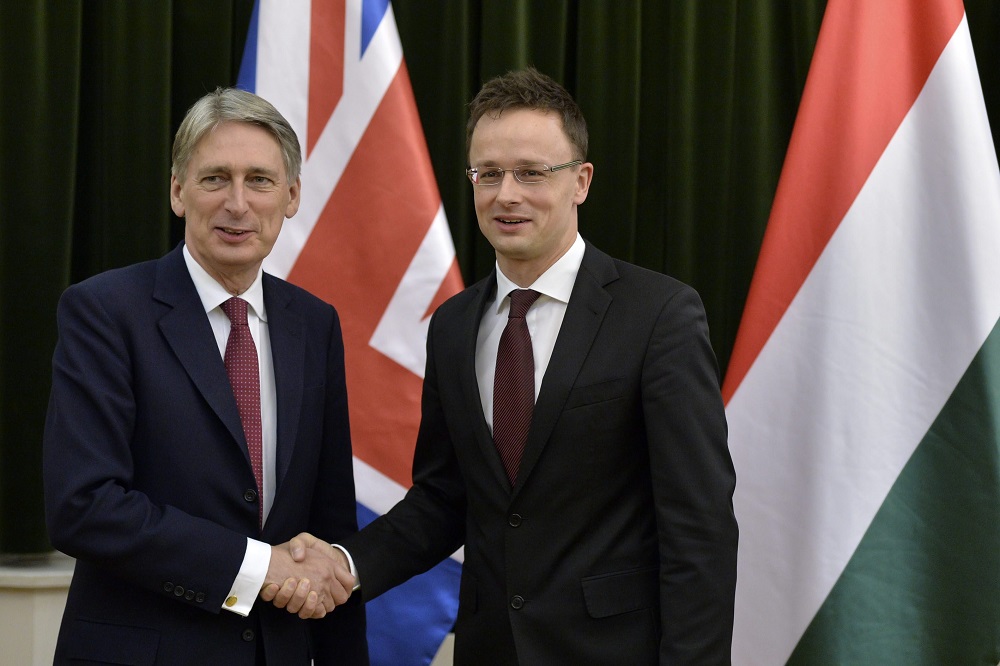 UK Foreign Secretary Philip Hammond and his Hungarian counterpart Péter Szijjártó urged all sides in Ukraine to fully observe the terms of the Minsk agreement. After talks with Hammond on Friday, Szijjártó told a joint press conference that they had discussed ways to improve the European Union’s competitiveness, energy security, immigration, the Ukraine crisis and the fight against the Islamic State. He added that they were in agreement that only a peaceful solution in Ukraine would be acceptable.

Szijjártó said that Hungary would continue to stick to all common European decisions concerning Ukraine. Hammond said the separatists had already breached the terms of the Minsk agreement and Russia was prosecuting its interests with ever greater force. EU member states will retain sanctions until which time the sides fully comply with the terms of the Minsk agreement, he added. Hammond said that Ukraine’s troops must not be left to disintegrate but for the time being arms would not be supplied to Ukraine.

Speaking about European issues, Szijjártó said that Hungary and the UK had done much to improve European competitiveness, and both countries had shown major economic growth and good employment numbers. In order to secure EU competitiveness over the long term, it is important that the bloc be open to strategic cooperation with countries and regions outside Europe, he said. Hammond said that a EU-US free trade agreement would provide a “very good opportunity” from the point of view of the EU’s future. He said Europe cannot isolate itself from the global economy and it must address the challenges posed by emerging economies while boosting economic efficiencies and at the same time preserving the living standards of European citizens.

On the topic of the fight against the Islamic State (IS) terrorist organisation, Szijjártó said that the killings of Christians and other communities must be put to an end, and the government has accordingly asked the parliamentary parties to consider whether Hungary should boost its contribution to efforts by the international coalition against IS. Hammond said he hoped that Hungary would provide military support towards stopping the terrorist organisation’s endeavours. He also said that the UK was committed to open cooperation and a partnership with Hungary, and they had discussed how to improve trust in the business environment.